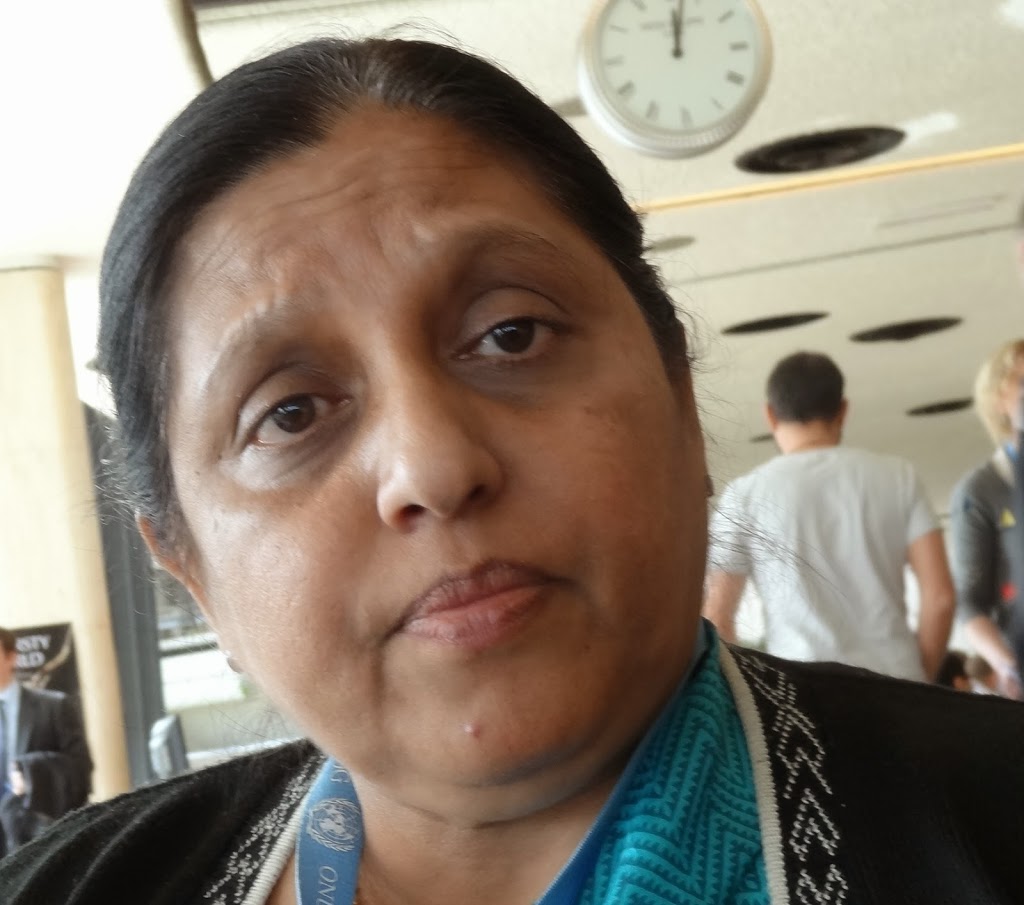 Nimalka Fernando ( IMADR)
Thank you Mr. President,
IMADR welcomes the visit of High Commissioner to Sri Lanka and her oral update thereon conducted under item 2. We also would like to take this opportunity to express our sincere appreciation to Madam High Commissioner for providing precious time in the busy schedule to listen to a variety of civil society actors during her visit. In our dialogue with the Madam High Commissioner in Sri Lanka, we have expressed our concerns over the continuing violence and increasing religious intolerance.
Up to date we have not heard of the progress made by the Commission appointed to investigate into the disappearances in the North and East in the eve of your arrival. We urge the GOSL to widen the mandate of this Commission to investigate into all disappearances and abductions that have taken place since 2005 up to now.

As you stated in your statement on 31 August, “the war has ended. But the pain lingers on”. It is this stark reality that was demonstrated in the recently concluded Provincial Council Elections in the North of Sri Lanka. We Sri Lankan human rights defenders were on the ground working with all stakeholders to facilitate the holding of a free and fair election in a region which is heavily militarised and controlled through regular military surveillance. The election was held in a peaceful atmosphere with few reported incidents of election violence. Nonetheless, the 18th Amendment to the Constitution, enacted in 2010, undermined the constitutional and legal framework for a credible and competitive election. In particular, the provision for an independent Electoral Commission has been negated. There was inadequate enforcement of existing laws that provide for a level playing field for all candidates, such as the use of state resources in electoral campaigns.

Mr. President,
Enough time and space were given to the GOSL to fulfil its fundamental responsibility. However, a number of them remain as serious concerns, continuing culture of impunity, collapse of the rule of law, removing impediments to the functioning of civil society and free media, upholding the right of peaceful assembly and demonstration of people, to name a few. We still continue working with and for the affected communities cooperating with you and the UN despite the attacks by ruling party politicians and at times His Excellency himself for what appears to them as carrying tales to the international community. All these facts clearly show the failure of the GOSL to seriously tackle the issues and the lack of credible domestic mechanism. Reconciliation cannot be realised only through infrastructure development which does not facilitate the participation of the community.

Accountability and justice is crucial for all people affected by the 30 years of war. The 83% vote cast in the North is the voice from them, from those who are still searching and waiting for the disappeared, their loved ones. The visit of High Commissioner has indeed paved the way towards reconciliation and accountability. However, further steps must follow from the competent UN bodies taking decisive actions. The people need an independent international investigation into all violations of international human rights and humanitarian laws.

Statement delivered at the 24th session of UNHRC.
IMADR is an NGO in consultative status (Special) with the Economic and Social Council of the United Nations