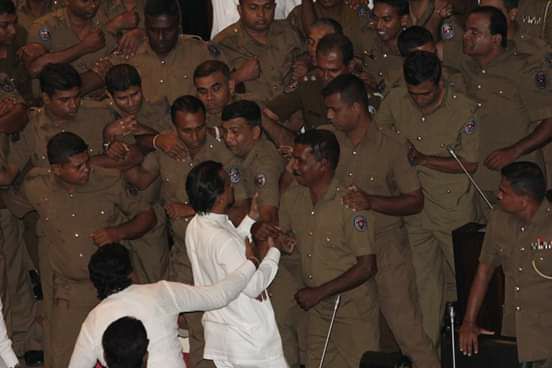 As pro-Rajapaksa parliamentarians threw water lethally spiced with red chillie into the eyes of unarmed police officers valiantly guarding Speaker Karu Jayasuriya, the seventy-eight year old Speaker may take heart that his grace under fire will stand out as the most remarkable example of steadfastness in Sri Lanka’s parliamentary history. Images of him resolutely facing down parts of a chair, a copy of the Bible and the Constitution aimed at his head, as the House (euphemistically) ‘sat’ this Friday will be indelibly imprinted in the nation’s memory for a long time.

The calling of police into the Chamber neccessitated by the extraordinary behaviour of Rajapaksa-led Sri Lanka Podujana Party (SLPP) supporters who sat in the Speaker’s Chair and the employing of chillie water, ironically a favourite torture tactic against alleged (Sinhalese) criminals and (Tamil) ‘terrorists’ in Sri Lanka’s detention centres, were an ignoble first in the legislative assembly.

Speaker Jayasuriya had to be huddled in a corner of the Chamber as more than twenty police officers and parliamentary staff stood their ground against the deadly rush of the SLPP, many of whom were regularly traipsing to court in corruption cases. As several vulgar indignities were visited on him, Kipling’s words came to mind; ‘if you can keep your head when all about you are losing theirs and blaming it on you…’ This was a continuation of what transpired on Thursday when dustbins and other sundry objects were thrown at him and he was abused in filth.

Who answers for the assaults on public/police officers carrying out their duties? Why do we waste public funds on parliamentary sittings and in elections to send back reprehensible profligates who strut about in the Chamber shouting vulgarities, sit on chairs of parliamentary officials to comb their hair and sneakily pour bottles of water on the Speaker’s Chair? What will it take for the voters to send a powerful message of rejection to these ‘un-worthies’?

Meanwhile former President Mahinda Rajapaksa alleged to be choreographing this drama was chuckling in the Prime Minister’s seat unmoved by votes of no confidence against him. But even strong supporters of the ‘Rajapaksa’ brand in rural Sinhala Buddhist constituencies must balk at the ugliness on display as in fact, did many Sri Lanka Freedom Party (SLFP) parliamentarians. At no point even during the Rajapaksa decade was defiance so open, so crude and so contemptuous of parliamentary democracy as evidenced on Friday. If this is the show of brute strength now, the nation should surely shudder in expectation of what lies ahead once power is seized de jure.

A serious question for the President to answer

The SLPP/SLFP objection to the Speaker is that he acted partially to the United National Party (UNP). Taking that objection on, is the answer to let its members run riot in the House? If two UNP parliamentarians are alleged to have taken sharp objects into the House on Thursday, then let the law take its course. In fact, the issue here is very simple. Besides the UNP, the majority in the House consists of members of smaller political parties including minority parties and the Janatha Vimukthi Peramuna (JVP) whose members were also attacked with chillie water by the Rajapaksa camp. As the Speaker reminded President Maithripala Sirisena in their famously acerbic exchange of letters, it was his duty to heed their call to uphold the authority of Parliament. Is the Speaker to blame for the fact that the Rajapaksa camp could not succeed in cross-overs despite bribes and ‘Cabinet’ positions to change that majority?

Affirming a vote of no-confidence ‘by voice’ is perfectly allowable by Standing Orders. Yet as one Sirisena loyalist and a lawyer to boot quite nonsensically insisted, this must be done in ‘the proper way.’ That insistence may be valid if his rowdy colleagues did not boisterously prevent order in the House, refuse to collaborate in proceedings and sit in the Chair. In that background, the primer put out by the Office of the ‘Prime Minister’ as to the procedure on a no-confidence motion must be tossed forthwith into the garbage bin.

So as Sri Lanka continues to lack a duly constituted ‘Cabinet, a ‘Prime Minister’and an effective ‘Government’, the President must answer a serious question. Ordinarily, he may be guided in his interpretation of the Constitution by the Supreme Court as expressly provided for in the constitutional text or by the Attorney General. He has not done that on all accounts. Instead, in his exchange of letters to the Speaker as well as earlier, President Sirisena reiterated that he had acted upon the advice of ‘legal experts.’ If so, the President must answer as to who these ‘expert/s’ are. He is bound to do so as Sri Lanka struggles in the grip of the worst democratic ordeal since independence due to this very ‘advice.

Paying for past mistakes

But the enormity of constitutional subversion by the SLPP/SLFP aside, the UNP bears singular responsibility for this calamity. Those who marveled as to why the Rajapaksa clan inexplicably went home without a murmur following the 2015 Presidential election need to understand that the naked grab of power now is precisely what should have happened then. On both occasions, the Rajapaksa phenomenon was characterised by the same imperviousness to the law.

Close to four years ago however, that reaction was prevented by the enormous surge of popular will against which the anti-democratic forces retreated strategically, nursing their wounds and waiting for a comeback. The victory was however taken lightly and casually by the ‘yahapalanaya’ coalition with the costly and counter productive gamble to delay corruption cases and worse against the Rajapaksa regime expecting that this would splinter the SLFP. The Central Bank bond scan and typically elite ‘blind, deaf and dumb’ decision-making across constitutional, economic and social fronts created a perfect political storm that we are now in the eye of.

So while the UNP may weep at the death of democracy, there is a history lesson that must be learnt. Certainly the SLFP has split or as is the case, more ‘swallowed up’ by the SLPP but at what enormous cost? And the awakening of dormant provincial and rural bases of the UNP will mean precious little if solid democratic re-ordering of the decision-making hierarchy does not follow.

But leaving alone party politics, there is reason to hope. The Rajapaksa-return has inspired the re-emergence of popular resistance. Critically, the country’s painfully recovering democratic institutions have withstood challenges so far. Amidst feverish speculation, the Supreme Court handed down a stay of the President’s dissolution of the House until the matter is determined on its merits. The redoubtable Speaker has stood his ground against very heavy fire, physical and verbal. Both deserve the unstinting admiration of the nation. Meanwhile, the police and the military have kept their distance from a vicious political tangle that may have worked out very differently elsewhere in the region.

All this is to the good, even as we recoil in response to the palpable horror that is taking place in the House by the Diyawanna.