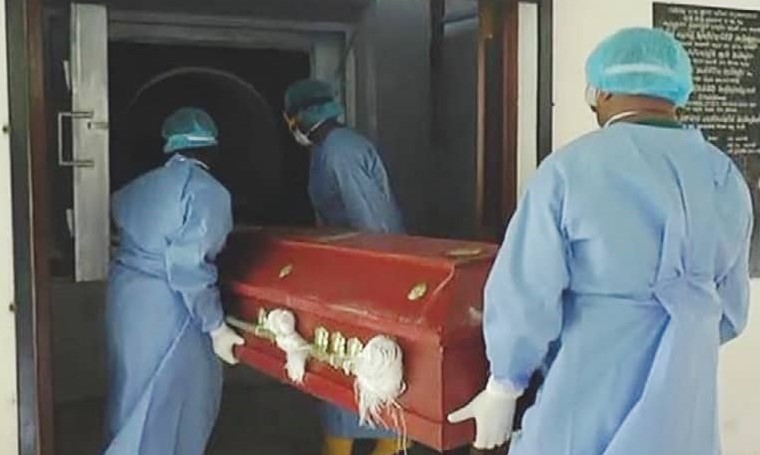 The tragic circumstances and horrific treatment of the family of the deceased from Modara, [Colombo] who was misdiagnosed for COVID19, and thereafter cremated is important to take note. It also leaves a lot of unanswered questions.

As recounted by her family to me, the deceased was a 44 years old Muslim woman (media reported her as 52 years old) who was suffering from a cold. Having no pre-existing conditions, she had gone to a local clinic and thereafter the NHSL where she was prescribed medication.

According to the family, she had passed away upon admission to IDH, approximately around 2-3 am. The family only found out about the time of death much later.
At 5:30 am on Tuesday morning, not knowing that the mother has already passed a few hours prior, the family received a call saying that their mother has been infected with COVID and to not leave their houses and authorities will arrive by 9 am.

The family resides in a flat at a large housing scheme in Modara, and the military, police and health authorities locked down the area on Tuesday morning. At 11:30 am, the authorities only informed the family that their mother was serious, but in fact, she had already died.

The son of the deceased then recounted to me the sheer terror and harassment which occurred thereafter. As they were a large family, with extended relatives living in the same scheme, all of them were subject to extremely harsh interrogation.

[alert type=”success or warning or info or danger”]This included the law enforcement threatening bodily harm, disrespecting & abusing them derogatorily, all in the presence of several young children for the purposes of contact-tracing. The family recounted that they felt as if they were treated like murderers or terrorists.[/alert]

Thereafter, they were taken outside where they underwent PCR tests and were disinfected, along with their children including a 2 months old infant, in full view of the several media cameras aimed at their faces.
They were then put into a bus under military escort, and were not informed where they were being taken. Moreover, all this while, they were never told that their mother had already passed away that morning.
Around 4 pm, the family while en route to Kandakadu QC, they were informed of the death. The second son of the deceased who was living separately was summoned to IDH.

Upon arrival, the authorities then gave him documents to sign: consent to release the body for cremation, and consent to send an organ sample for testing. The latter procedure had apparently already been conducted, and they only asked for his consent later.

He signed under duress. Thereafter, he was taken to the body which was lying in an unsealed casket. Expecting to see a sealed coffin, the surprised son was able to go right up to her, & even took a photo of the body so that his family can see their mother for one last time.

He was then allowed to conduct a quick prayer. The son recounted that the authorities were seemingly lax about taking precautions around the body, as if they already knew she was not infected with COVID. After the prayer, the body was taken for cremation.

It was two days later that the son heard through media that his mother had not succumbed to COVID. Recalling the lax attitude of those at IDH around the body, he has now convinced himself that his mother was forcibly cremated as they already knew she had not been infected.

The family members who were at Kandakadu were suddenly told on Thursday that they can return home. They were shocked as even if there is slight risk, they would have been kept in isolation. It was only on their way back they told that their mother didn’t die of COVID.

The family is in grief and are at a loss, as not only were they not allowed to mourn their mother and give her a proper burial according to their collective wishes, but also they were subject to humiliation at the hands of the authorities and the media in the process.

As recalled to me by the husband, he said he can come to terms that she has lost her life, but not the fact that she was cremated. They are desperate for closure, and have several unanswered questions on the death and cremation in itself.

It is important to note that this is a pandemic and all credit is due to those on the frontlines. However, while all relevant precautionary measures should be undertaken in full, they should be done in a way that does not dehumanize and disgrace individuals like so.

Moreover, with the ongoing militarization of our services, it begs the question of accountability. This case is a prime example where the deceased was misdiagnosed for COVID, and thereafter cremated. For the sake of the grieving family, I hope these answers will come soon.

(Compiled from 20 tweets of @alizmoulana)