The need of the hour: Getting rid of the Rajapaksas as a necessary prelude to root and branch systemic reform – Dr P. Saravanamuttu 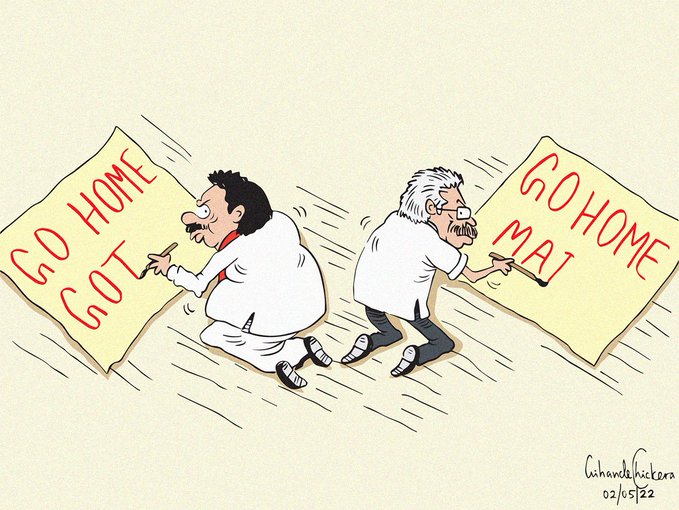 The situation in the country is one of dynamism as well as stalemate.

Dynamism on account of the determination, creativity and resilience of the Gotagogama demonstrators, the extension of their efforts to the Mainagogama demonstration outside Temple Trees to the sheer celebration of Sri Lanka’s diversity and the unity of its peoples, to the presentation of the 21st Amendment in Parliament by the SJB Opposition and their mammoth march from Kandy, culminating in Colombo on May Day as well as the Hartal; stalemate because the Rajapaksas show no sense of shame and indeed self-respect to heed the call of the people and GO.

“They are being disabused of this attitude and belief on a daily basis, but admittedly insufficiently so far, to heed the message of the country. Consequently, pressure must intensify to demonstrate to them that they cannot govern the country”

The concession of some elements of the 19th Amendment being reintroduced is being suggested by them. However, both Gotabaya and Mahinda Rajapaksa intend to stay in Government, tinker with the Constitution, shuffle the pack of ministers, in the belief that in the longer or long haul the protests will evaporate and eventually be abandoned.

They are being disabused of this attitude and belief on a daily basis, but admittedly insufficiently so far, to heed the message of the country. Consequently, pressure must intensify to demonstrate to them that they cannot govern the country – yes, the country must be made ungovernable under their remit, by peaceful and non-violent action. Peaceful non-cooperation should be considered, with the consent, cooperation and active participation of the private sector as well to succeed.

Let us brace ourselves to the fact that getting rid of the Rajapaksas is only one part of our salvation from the current crisis or indeed a necessary but not sufficient condition for it.

It will get worse before it gets better on the economic front, is the message of many, including the finance minister. This is a phase of our history which we have to acknowledge we allowed ourselves to get into and therefore must acknowledge too, the considerable pain and suffering entailed to get out of it. Not everyone will accept this, but if and when the IMF deal kicks in, the government of the day will have to launch an island-wide communications campaign to explain to the people what we invited upon ourselves and why we have to further suffer the pain the IMF deal will bring with it as a necessary part of getting ourselves out of the crisis and back on a trajectory of growth.

It is absolutely vital that a government attempting this enjoys the trust and confidence of the people. It just cannot work otherwise and risks social and political upheaval and repression. Let us brace ourselves to the fact that getting rid of the Rajapaksas is only one part of our salvation from the current crisis or indeed a necessary but not sufficient condition for it. It is just the pivotal beginning, if the opportunity provided by the deep crisis is to be availed upon to deal with the real, fundamental issues of our governance and economy.

“The SJB and the JVP are absolutely right in their position of not having anything to do with any government under Gotabaya Rajapaksa or any that includes his siblings.”

Whilst the protests continue, focus shifts to Parliament in terms of the proposed 21st Amendment. The issue here as well is of numbers. Does the SJB have a simple majority to pass the motion of No-Confidence and will it prove to be the base upon which they can build a two-third majority to abolish the executive presidency? The Government has responded with its own version of the 21st Amendment but the public is yet to be apprised of what it contains. The President is reported to have said that he will appoint an interim government if the parties in Parliament can decide upon its composition. There are reports too of a split in the ranks of the SLPP between the president and the prime minister – with the former supposedly willing to make a sacrifice of the latter to stay in office and save the dynasty in politics.

The SJB and the JVP are absolutely right in their position of not having anything to do with any government under Gotabaya Rajapaksa or any that includes his siblings. Whilst those arguing for a compromise in the face of the Rajapaksa unwillingness to leave government may consider a much weakened Gotabaya Rajapaksa presidency under a 21st Amendment to the Constitution, the question left hanging and hanging now for some 44 years is the abolition of the key impediment to governance in Sri Lanka, the executive presidency.

Forcing Gotabaya to go is the immediate issue. Once he is gone Parliament can act to install a head of state and an interim government which will bring in the necessary reforms before we proceed to elections, paper for ballots permitting! That interim government can be appointed on the basis that as a collective entity it will not contest elections, negotiate and take responsibility for the IMF agreement, abolish the executive presidency, preside over a referendum on the abolition – the people must have a direct say in this and endorse abolition since they have by their demonstrations brought the issue to a head – bring in the reworked and strengthened reforms of the 19th Amendment with regard to checks and balances on the exercise of executive power and authority.

The unions, the professionals, the private sector and civil society must take and hold the initiative for systemic and regime change with the predominantly young protestors in Galle Face who have so imaginatively and boldly initiated it.

Beyond the goal of regime change, of getting rid of the Rajapaksas, systemic change must require serious consideration of pruning the public service bill – some 1.5 million on the payroll for a 21 million population.

We must change the culture of entitlement, of being looked after by the State from cradle to grave, from free education to a Government job for life. We must take into account that unlike our immediate neighbours, our population is 52% female and ageing with all the ramifications for the health and other sectors this entails. We need serious reform of our tax structure, the agricultural sector and have to consider the consequences of a tea industry in terminal decline.

“One can go on with the list of areas of longer-term reform. The need of the hour however is getting rid of the Rajapaksas as a necessary prelude to root and branch systemic reform.”

Furthermore, we cannot sustain spending on the military as the largest component of our national budget. De-mobilisation is long overdue. We have too, to fully implement the 13th Amendment to the Constitution, at the very least, as part of the solution to the national question and reform the education system of the country to produce citizens of a functioning democracy rather than segregate our future generations according to ethnicity and religion. The PTA has to go and along with it we need to include a National Security Council in the Constitution.

Corruption has to be dealt with at the governmental level as well as the societal level. As a simple example, do the leading government schools in Colombo and hence the country, adhere to the territorial limit for entrance? How many middle-class parents in this country are forced into corruption by having to adopt addresses that meet this requirement simply to give their children the ‘best education’ the country offers?

Were this requirement followed would there not be a significant minority of Muslim children for example in our leading boy schools in Colombo, given that they are located in areas where there are a number of Muslims? And given the language policy, when do children of different ethnicities get to meet each other? Why should a particular religion be taught in schools, rather than comparative religion, if religion at all?

One can go on with the list of areas of longer-term reform. The need of the hour however is getting rid of the Rajapaksas as a necessary prelude to root and branch systemic reform.

The Rajapaksas are not responsible for the deeper systemic crisis of governance that we are facing. They are responsible for grossly exacerbating it with their greed for power, corruption, derisive dismissal of human rights concerns and demonstrable incapacity for governance. As a consequence they have made themselves the issue and are thereby, perversely the catalyst for change. As the chief executive of the country, elected to provide strong and decisive leadership Gotabaya Rajapaksa has failed miserably.

He has flipped many times in terms of decision making and has not even addressed the country apart from admitting when he shuffled his pack of MPs in the Cabinet, that we should have gone to the IMF earlier and that his decision on the fertiliser issue was a mistake. Is this decisive leadership? Who should take responsibility? After all he wasn’t elected to be the Chief Guest at a bizarre performance of rank misgovernance but as the individual responsible for directing, sustaining and strengthening the performance of governance in government.

What we have with the Rajapaksas is the abandonment of decency, of a sense of responsibility, of a sense of shame in public affairs. They have stoked the politics of hurt and harm and hate. They personify impunity which in turn constitutes the key, insidious threat to governance and governance in a functioning democracy. Consequently, we go around the world with a begging bowl and have to accept the Indian finance minister telling the IMF that we should be downgraded to low-income status in order to qualify for quick relief.

The SJB march will reach Colombo by May Day and Parliament will reconvene three days later. Let us endeavour to ensure, hope and pray that the opportunity for redemption is not lost and that the paradigm of governance comes to be institutionalised in all of us.