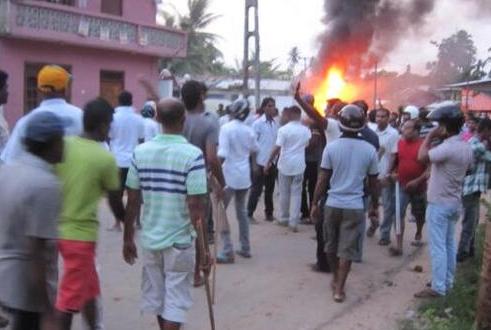 The National Shoora Council (NSC), has urged the authorities to conduct an impartial and transparent investigation into the complaint made to the Inspector General of Police by the Muslim theologian, Moulavi Mohamed Ameen Mohamed Ashkar Ali that he and two of his brothers were falsely implicated and remanded from June 12, 2014 on the allegation that they had assaulted a Buddhist monk, close to the Pathirajagoda temple in Alutgama.

Tariq Mahmud the President of the NSC, a grouping of national level Muslim organisations, professionals, academics and activists said that the Moulavi had, in his complaint to the IGP, denied the allegations levelled against them. He has said he was kicked in the neck by a monk at the Alutgama Police Station, when all three brothers, following their arrest, were forced to walk on their knees towards several monks and to apologise.

“The NSC believes that the shocking incident of a monk kicking a Moulavi, a respected Muslim theologian at the Police Station on June 12th, had taken place in the presence of senior police officers, several politicians and hundreds of on-lookers. The Moulavi has complained that the Pathirajagoda incident had been only a minor argument that led to an exchange of blows between his brother and the driver of the monk. The dispute was settled with an apology tendered and that at no stage was the monk assaulted by anyone, he has said.

According to Moulavi Ashkar Ali’s complaint to the IG Police made after he and his two brothers came out from remand custody, the monk had told the OIC, when the drivers were questioned at the Alutgama Police Station, that he was not assaulted in the incident.

The monk was at the police station for more than three to four hours, without any sign of discomfort. However, after a number of other monks and lay persons began to gather, following false rumours that a monk had been attacked by a club wielding Muslim, pressure had been brought on the OIC, who had according to the Moulavi’s complaint to the IGP, told the monks who were pressing the OIC to file a case, that the monk alleging assault must be admitted to hospital, for him to produce the three brothers in Court.

The NSC understands that the first hospital to which the monk was taken had refused to admit him as he had no injuries. The second hospital had admitted the monk but the Medico-Legal Report (MLR) issued by this hospital disclosed no injuries. However the second hospital kept the monk in bed for three days, fuelling rumours of all sorts of injuries on the monk. There is therefore a need to investigate these matters comprehensively to establish the truth.

The NSC notes with deep shock that at the Police Station, according to the complaint to the IGP, the three brothers, including the Moulavi, had been compelled to walk on their knees towards a number of monks who had gathered at the Police Station and seek their pardon and when the three brothers were on their knees and moving towards the monks, the Moulavi had been kicked by one of the monks, which had struck the Moulavi’s neck and that thereafter they were put in the Police cell.

Never in the Sri Lanka’s history has a monk ever been attacked by any Muslim and in this case too there appears to be no motive for the monk to be assaulted over the incident between two drivers. Never has there been also any previous alleged incident in which a monk had assaulted a Muslim theologian, highly respected by the community similar to that of Buddhist monks.

The NSC appreciates that the Bar Association of Sri Lanka had referred the Moulavi’s complaint to the Attorney-General, who had called upon the IG Police for a fresh investigation on the Moulavi’s complaint. The NSC also notes with appreciation the assurance given by the AG to BASL to prosecute those against whom there is evidence.”

Original caption of the ariticel:  NSC calls for impartial inquiry into alleged assault on monk at Alutgama
http://www.island.lk/index.php?page_cat=article-details&page=article-details&code_title=107283