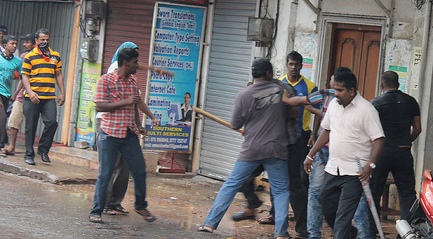 National Peace Council
The Sri Lanka Parliament vote to impeach the Chief Justice has been in total disregard of the judicial decision by the country’s two highest courts- the Supreme Court and the Court of Appeal that the findings of the Parliamentary Select Committee have no basis in law and are invalid. Now this extra-legal process of impeachment awaits the President’s final decision. However, the power of interpretation of the Constitution lies solely with the Supreme Court.

The decision of the Supreme Court means that the Chief Justice is legally entitled to hold office, notwithstanding the Parliamentary vote. The legal fraternity has said they will not accept a new Chief Justice appointment under these circumstances. The National Peace Council hopes that the President’s decision will be a wise one, and in accordance with the Constitution as interpreted by the Supreme Court, which every elected person in the two organs of State have sworn to uphold.

The impeachment of the Chief Justice by Parliament is the culmination of the process ushered in by the 1978 Constitution by using the two-thirds majority that the government has in Parliament. The denial of the right of the UNP to sack their members who crossed over to the ruling party alone enabled the Government to obtain a two-third majority in Parliament. But this action has nullified the entire rationale for democracy under a Proportional Representation system of Election. It has vitiated the claim that our elected Parliament represents the free choice of the people and represents their voice. These MPs who crossed over do not represent the people, or any People’s Mandate, but only themselves at best.

When the Supreme Court decided on the issue of crossovers, and later approved the 18th Amendment which further concentrated power in the Executive Presidency, it ought to have borne in mind the precarious balance of power and ought to have realized that changes of this nature change the essential structure of the Constitution and as such the very nature of our democracy. The MPs who crossed over gave the Government the two third majority to enact laws like the 18th Amendment which violates the fundamental principles underlying democracy and has substituted a government of politicians for politicians by politicians instead of government of the people for the people by the people, which is the foundational principle of democracy.

The most important feature of a democratic system is the integrity of its institutions. Parliament is the institution vested with law making powers. But it cannot interpret the laws, which is the task of the judiciary. It is noteworthy that the government passed the controversial Divineguma bill in Parliament after taking into account the Supreme Court’s judgment.

On the other hand, it is being arbitrary and selective in choosing not to accept the ruling of the Supreme Court in the case of the impeachment of the Chief Justice. Can the Parliament pick and choose which Supreme Court decisions it will accept and which it will not? This can have adverse consequences as there are other controversial decisions made by the Supreme Court, such as the de-merger of the Northern and Eastern Provinces, which may be contested in a similar manner in the future by those who do not accept this decision on the grounds that it runs counter to the 13th Amendment and who may quote this precedent and refuse to recognize this Supreme Court decision.

The government decision to override the decision of the courts at its discretion, will lead to the judiciary becoming another administrative department of the government to carry out the decisions of the Executive which appointed the Superior Court Judges who would be expected to comply with the wishes of the Executive rather than go by the intrinsic merits or otherwise of the matters in issue before them. We do not believe that there can be said to be justice in such a situation where Judges merely carry out the wishes of the Executive.

Even after Parliament passes a law it has to be interpreted by the Supreme Court – a power granted by the Constitution only to the Supreme Court. If it does not, it can be struck down regardless of the wishes of the majority of the people. This is the only way to protect the rights of the ethnic and religious minorities granted by the Constitution. It is at a democratic check and balance essential for the preservation of personal freedom and the Rule of Law. The failure of the Parliament to accept the Supreme Court will we hope not be followed by the Executive Presidency the other organ of the State. If these two organs of the State disregard the interpretation and rulings of the Supreme Court the way would be open for an autocracy. This opens the door to an unjust State without law but operating on the arbitrary decisions of the Executive. We fear that the country is heading towards a failed State type of situation where there is no Rule of Law or supremacy of the Law and the Constitution. Sri Lanka is therefore in a constitutional crisis even though most people in the country may be unaware of this. We hope mobs will not take the law into their own hands and terrorize the Chief Justice and force her to quit by unlawful mob violence.

There may be no doubt that life in Sri Lanka in general has improved after the end of the war which the government can claim credit for. However the undermining of public institutions is bound to make this improvement unsustainable in the longer term. Where the Rule of Law breaks down, it is inevitable that mob rule will eventually prevail. Already mobs have celebrated the impeachment outside the Chief Justice’s residence. Earlier they also threatened protesting lawyers in the presence of the police who stood by. The National Peace Council expresses its grave anxiety that the ground is being laid for non-democratic processes to gain strength, and calls on the government to find an alternative to the process currently underway. If the legitimacy of the national judiciary and Rule of Law is eroded, the case will grow stronger for international judicial interventions in the internal affairs of the country