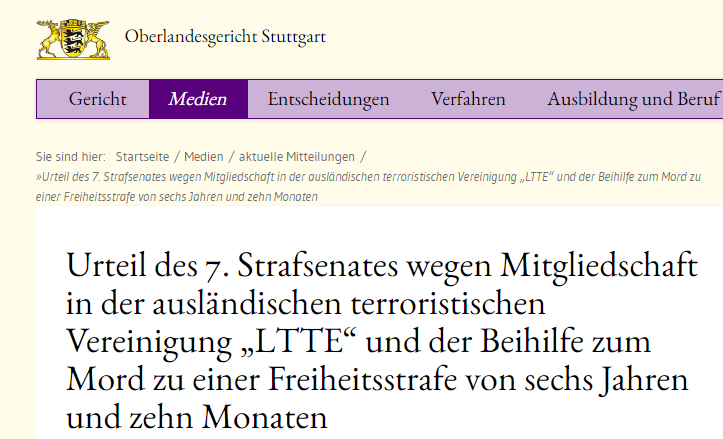 Short Description of the judgment of the 7th criminal Court for membership in the foreign terrorist organization “LTTE” and for the murder to six years and ten months imprisonment.

Under the chairmanship of Stefan Maier, the 7th criminal senate of the Stuttgart Higher Regional Court today pronounced the judgment on a 40-year-old Sri Lankan citizen for membership in the foreign terrorist organization “Liberation Tigers of Tamil Eelam (LTTE)” in two cases. One of them is a Criminal offense for aiding a murder. He was sentenced to a total prison term of six years and ten months. After 15 days of main hearing, in which 13 witnesses and three experts were heard, the Court essentially determined the following:

The accused, born and raised in Sri Lanka, entered the federal territory in February 2012 and applied for asylum on March 6, 2012. Since his application was rejected and he was not granted refugee status’ Then he brought an action before the Freiburg Administrative Court, which, on July 5, 2017, banned the deportation on the basis of his first argument at the court.

This information provided by the accused before the administrative court provided the basis for the investigation and the criminal proceedings that were closed today. It is a fact that the allegations made by the General Prosecutor’s Office were fully confirmed largely due to the defendant’s presentation to the Administrative Court, which he maintained its key points during the court hearing.

In any case, the accused had been a member of the foreign terrorist organization LTTE since August 30, 2002, which sought to establish its own Tamil state in Sri Lanka and pursued this goal with numerous attacks on state and civilian facilities. After two training sessions with the LTTE, the accused became a member of the military secret service of this organization and was integrated into its hierarchical structure and chain of command. In the direction of his superiors, he collected information relevant to attack opponents and traitors to the LTTE in Colombo since 2002. This information as he knew created the basis for the liquidation of opponents by murder.

In July 2003, the accused was ordered to provide information about the habits, lifestyles and security arrangements of the then Sri Lankan Foreign Minister Lakshman Kadirgamar, on the basis of this information he was to be killed. The accused was aware that the LTTE wanted to murder the minister because he was involved in the Sri Lankan government as Tamil and was committed to outlawing and fighting the LTTE.

On August 12, 2005, Lakshman Kadirgamar was shot dead by at least one LTTE sniper posted in a neighboring house at the swimming pool in the garden of his private property in Colombo. The information collected by the accused until May 2005, especially his reference to the possibility of using firearms from a neighboring building, made a substantial contribution to this insidious murder. Collecting this information was done on his own motivation as well so that he was convicted of aiding and abetting the murder.

In the final phase of the armed civil war, the defendant had been tasked with evacuating senior LTTE leaders and injuries from the combat area, evading their arrest by Sri Lankan security forces and helping them to flee Sri Lanka until May 2009. On May 18, 2009, the LTTE was politically and militarily defeated and was then no longer active in Sri Lanka.

As part of the sentence, the Court taking into account the fact that on the one hand, the acts occurred very long ago and that a guilty verdict would not have been possible without the information of the accused and on the other hand his acts were extraordinarily long-lasting and extremely weighty acts the Court sentenced him a rational punishment.

This short description was provided by the Court and translated from German to English using translating software by Sri Lanka Brief. This is not a legal translation.

The original short Description is here.

This is the first time a German court heard a case of murdering a foreign minister of another country. The accuse is 41 years old Sri Lankan Tamil. His name is Navaneethan Ganeshalimgam. He is married and has a son. Both of them live in Sri Lanka.

Since 2002 he has worked as an undercover intelligence operative of the LTTE  based in Bambalapitiya. In the day time, he worked in a communication centre in Wellawatta. After befriending with EPDP he has been able to get access to many places and events.

An officer from German state intelligence arm  Bundesnachrichtendienst (BND) provided satellite pictures of the murder scene taken within 24 hours of the incident.  Then German Ambassador to Sri Lanka also gave evidence. Satellite images provided by the BND were so clear, one could see the time of the day from wristwatches of investigation officers at the crime scene.

It is not clear that what led to the accuse implicating himself in a high-level murder. He had been sent to Colombo and Malaysia on different occasions to gather intelligence information and he has helped high-level LTTE leaders to escape to Malaysia in April/May 2019.

No Sri Lankan media or embassy officials were present at the court hearing.