Report:The media regulator of Sri Lanka, the Govt has its own 30 plus media outlets 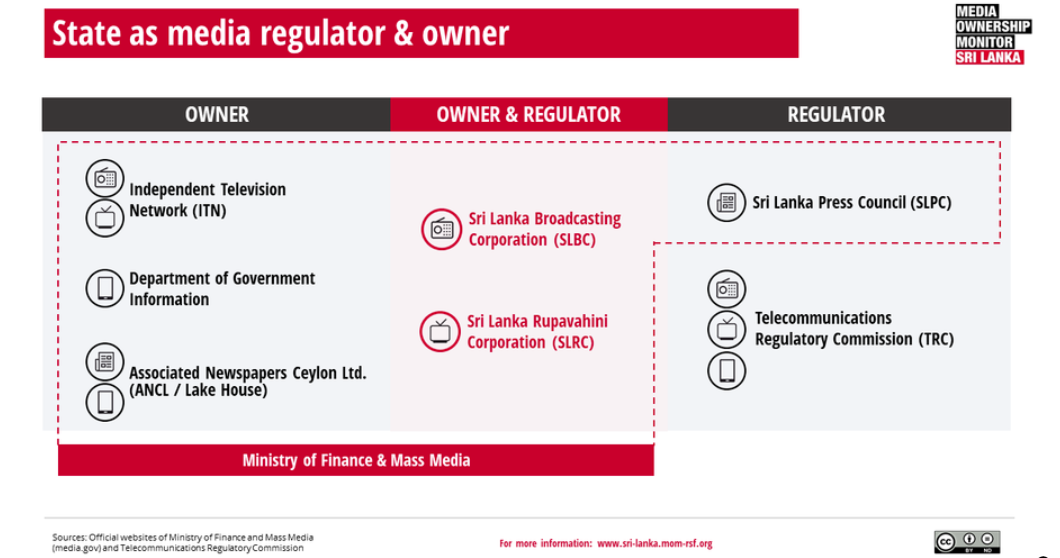 In the media space, the state’s dual role as both an owner and a regulator means it is a player in the game as well as a referee and a rule-maker. With ownership of at least 30 media outlets, the state remains a numerically large player across print, television, radio and online media. The general purpose of such state-owned media is to communicate with the public. To a great extent, this entails carrying information regarding the actions of the elected government and its representatives, and often reflects the government’s position on particular issues.  By contrast, a media regulator is expected to ensure and enable an equal playing field in the media sphere. In the Sri Lankan context, the state oversees both licensing and regulation, through a number of institutions under the Ministry of Finance and Mass Media, and the Telecommunications Regulatory Commission (TRC). This article explains how these dual roles can result in a serious conflict of interest. Such a conflict enables the state to control the media space by amplifying its own message, and suppressing the messages of its critics.

The state owns and controls the following media entities:

Meanwhile, the state has the power to regulate the media landscape through the following institutions:

The regulatory powers of the state are concentrated within a hierarchical structure under the Ministry of Finance and Mass Media, and the TRC. Through a number of laws that set up the regulatory bodies under the Ministry and the TRC, the state is legally able to make the rules of the game, regulate other players of the game, and also play in the game.

The state’s dual roles come into conflict when the referee-cum-player is expected to oversee both itself and its competitors.

The conflict of interest arising from the state’s ownership and regulatory roles places the state at a major advantage in the media space.

On the other hand, it has the power to suppress other institutions – particularly those critical of the state. This potential is compounded by the fact that specific actors within the regulatory apparatus are connected to high-powered political actors. For instance, since the Secretary to the President serves as the Chairperson of the TRC, there exists potential space for the President to intervene in the regulation of the media. A recent example highlighting this possibility was the Ministry of Parliamentary Reforms and Mass Media’s response to a Right To Information (RTI) request. The letter revealed that four out of thirteen websites had been blocked for ‘publishing incorrect information and damaging the president’s reputation.’

Moreover, in a move that was framed as political, the TRC obtained a court order to close a transmitter owned by Telshan Networks Limited (TNL), by alleging that its broadcasting licence had expired. The issue was framed as ‘political’ since the groups involved in the closure were linked on political and personal levels: the President’s Secretary is the Chairperson of TRC, and the owner of TNL, Shan Wickremesinghe, is the brother of the current Prime Minister. Prior to the closure, TNL had run content criticising the President.