The LLRC and the prospects of reconcilation in Sri Lanka 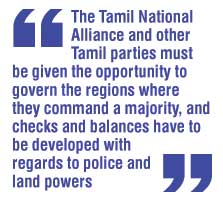 By Kumar Rupesinghe
It is now over three years since the LTTE was decisively defeated by the Government of Sri Lanka. Since then the government and the international community have been grappling with the issue of winning peace, addressing the causes which gave rise to the deadly conflict, issues of accountability, and reconciliation. These issues have dominated the Sri Lankan debate in the last few years.

Peace in the conflict literature is not the absence of war. There are three kinds of violence that are defined in the literature of conflict transformation. Johan Galtung, suggests that these three types of violence are direct violence, i.e. deadly violence used by both sides, structural violence, which is defined as structures which perpetuate poverty, inequality and discrimination, and cultural violence, defined as the denial of identity and the denial of the other. Whilst direct violence has been used extensively by both sides in Sri Lanka, this phase has now come to an end. However structural violence remains, with inequality and discrimination experienced not only by the Tamils, but also Sinhalese, Muslims, Christians and other minorities, through discrimination due to ethnicity, caste or class. The Tamils in the plantations experience structural violence due to super exploitation of their labour. Cultural violence also continues to dominate the narrative in Sri Lanka, in different manifestations such as the denial of identity, myths perpetuated such as the “Chosen People” narrative in the Mahavansa, the concept of a “homeland”, which requires a separate state, contestation as to the mythos of origins of peoples residing in Sri Lanka. Self-fulfilling prophesies, chosen traumas fill the folklore of the peoples living in the island. In winning peace, these narratives ,myths and ideologies have to be taken into account. It is in such a landscape that we have to examine the role of the Lessons Learnt and Reconciliation Commission (LLRC) as a vehicle for winning peace but also as a symbol of contestation
The Lessons Learn and Reconciliation Commission (LLRC) was a response to the concerns expressed by the western powers, India and the Tamil Diaspora in the aftermath of the war. It was to be just another Commission, condemned to the dustbin of history, which was the fate of so many other commissions, in the past. A distinguished panel was appointed by the President, and its members were seen as those favourable to the Government of President Mahinda Rajapaksa and did not think that it would be given serious attention. In short it was seen by the detractors of the government, as an eye wash, an attempt to cover a multitude of sins and omissions.
It is undoubtedly the efforts of the USA and later India through the resolution introduced in the UN. Human Rights Council that the LLRC took centre stage.. However, Sri Lanka was defeated at the UN Human Rights Council and it was a clear indication as to the will of the international community. 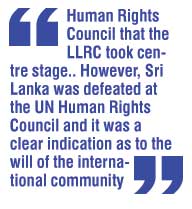 After the defeat of Sri Lanka at the UNHRC good sense prevailed and a strategic shift was taken by the President, to renew relations with the USA, and the western powers and India. The efforts of the Weeratunge Committee, and the tireless work of its members, produced an implementation plan, provides a measuring rod with key performance indicators on the performance of the government, where the more contentious issues would be taken up with the proposed Parliamentary Select Committee. Sri Lanka is now under the radar screen of the U.N. and the measuring rod will be the government’s own home grown implementation plan. The Tamil Diaspora would continue with its agitation calling for an international inquiry into war crimes but its efforts to draw the international community into this strategy would lose momentum, if the government implements the plan. Whether the Government has taken a strategic shift to win over the western powers upon whom Sri Lanka is dependent for its markets or is a tactical shift to buy time is yet to be seen.
However, India expects Sri Lanka to implement the 13th Amendment and as a first step it requires that elections are held in the north as soon as possible. Having elections in the North makes good sense, as it will be a major instrument in the reconciliation process. The Tamil National Alliance and other Tamil parties must be given the opportunity to govern the regions where they command a majority, and checks and balances have to be developed with regards to police and land powers. Such a step will relax pent-up frustrations and a sense of humiliation that the peoples of the north experience. The argument that we must wait till 2013 for the elections is based on a wrong premise-i.e. that the North must be developed, with infrastructure and development so that a grateful Tamil population will vote against the TNA. This is an erroneous theory based on fallacious arguments that the economy can shift people’s identity through economic and infrastructure developments. Further, the delay must not be interpreted as a way of changing the demographic balance. It is important that we heal the wound and remove the sense of humiliation of a beleaguered people. Humiliation is “about putting down and holding down.” It is the “enforced lowering of any person or group by a process of subjugation that damages their dignity.
To remove the sense of humiliation, and heal the wound, the people and their lenders must be co-partners in building the country with a shared vision and value for all. Here the leaders of the country, not only the Sinhalese but also the leaders of other communities, must work towards a process of accommodation and trust. For this to happen the mindset of all the parties, relics of the past, must be discarded to rebuild a new Sri Lanka. The challenge is how such a paradigm shift can be achieved.
DM
Share
Facebook
Twitter
WhatsApp
Pinterest
Email