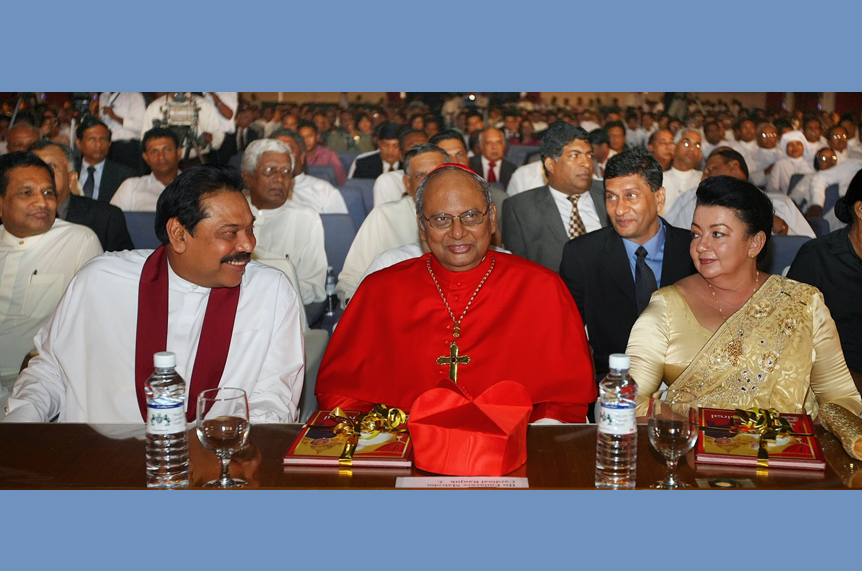 When the head of Sri Lanka’s Catholic Church asks in entirely inappropriate language as to whether Maithripala Sirisena, a former President of Sri Lanka is ‘wearing clothes’ when making statements regarding his responsibility as Head of State when Islamist jihadists struck on Easter Sunday in 2019, the good Cardinal must be apprised of several home truths.

First, state failures and investigations therein into how and why these attacks took place do not happen in a vacuum. The former President, who has incurred the peculiar ire of the Catholic prelate over  pronounced failures when holding high state office at the time, certainly should answer for the same. However, it is a grave mistake to proceed on the basis that all responsibility begins and ends there. What happened on that fateful day two years ago transcended the grievous loss of life. As profoundly as the impact that the attacks had on the lives of innocents butchered when they were praying in churches or celebrating the holy day at Easter Sunday breakfast in Colombo’s hotels, this barbarity had greater long lasting effect.

It precipitated state and political structures into the eagerly awaiting arms of the ‘deep state’ of militarised command. One might say with excellent reason that this ‘state capture’ was precisely the objective of the attacks. Predictably that deeply regressive transformation was enabled by the visceral fear that had gripped the public mind regarding the security of the nation. Indeed, that fear surpassed the trials of civil and ethnic conflict that this country had experienced for more than four decades but which the people had learnt to face with dull resignation if not with equanimity.

This was a new horror that came upon the populace, caught pitifully unawares and defenceless. Rightly (at one level), the criminal negligence of the impossibly infantile Sirisena-Wickremesinghe coalition Government was pinpointed as the main cause. Its eternal quarrels, the ignoring of unmistakable signs from the East that jihadism was poisonously spouting in the open, its appeasement of Muslim ministers who were using fundamentalism as their political message were a toxic combination. Islamist training camps flourished in bustling towns to the (apparent) ignorance of those around.

Great irony in calling for justice for the Easter Sunday victims

Even so and from a broader perspective, it is not only the former President or for that matter, the former Prime Minister and his merry Ministers who grinned at press conferences in the immediate aftermath of the attacks who must be put in the dock for this failure of accountability. As we can see from what has transpired since then, the problem goes to the State as a whole irrespective of which individual holds power at a given time. The dance that has taken place from 2019 with numerous Parliamentary committees and Presidential Commissions of Inquiry on what should have been first and foremost, the focus of a dedicated and ruthlessly effective criminal investigation tells us this if not anything else.

Consequently there is little point in the tired explanation that it is the Attorney General and not the Government that decides the progress of a criminal inquiry to apprehend the ‘culprits’ as referred to by the Catholic Archdiocese in its March 29th statement. Thus, secondly and most importantly, the Cardinal must understand the great irony in the Archdiocese calling for politicians ‘to refrain from any action that might hamper the independent and free implementation of the judicial process’ in regard to the Easter Sunday attacks.

To the contrary, all the evidence that we have seen in the functioning of this Government is exactly the opposite. Was it not a complete interference with the legal process when a Commission of Inquiry ostensibly established to probe political victimisation, intervened into ongoing cases in courts of law hearing human rights violations? These included, as must be recalled, the abduction and killing of Tamil and Muslim children and teenagers with state complicity in the post-war years in Sri Lanka. To be clear, that was as much a heinous crime after all, as the brutal killing of Catholics and Christians on Easter Sunday.

The Christian call for justice should not be selective

Can the Catholic Church close its eyes to these atrocities and selectively call for justice? Was this the example that Jesus Christ set by his life and by his passionately redemptive death which was for all humanity and not a chosen few? Above all, a state structure that has faltered in bringing about accountability for grave human rights abuses targeting civilians and indeed, in some notable cases, have been complicit if not instigatory in the same, cannot be (miraculously) expected to perform to bring about justice for the atrocity of Easter Sunday 2019.

Rather, what this has done and will potentially do is to tighten space for civil liberties to the extent that all of Sri Lanka will soon cry out, as George Floyd did when an American policeman was kneeling on his neck in Minnesota last year, ‘we can’t breathe.’ Already, the arrests that have taken place purportedly as part of these criminal investigations are bereft of minimum safeguards, including the arrest of a Muslim lawyer held for months absent proper charges and effective legal counsel. And earlier this month, the Government announced that it will, in pursuance of recommendations in the report of the Presidential Commission of Inquiry into the 2019 Easter Sunday attacks, bring a new counter-terrorism law.

Such a proposal is reason for acute apprehension. This is a Government which sees no problem with gazetting ‘deradicalisation’ regulations that are prima facie contrary to constitutional and legal standards governing the deprivation of liberty. The Penal Code, the International Covenant on Civil and Political Rights Act, (a travesty of a renowned international legal instrument) and the Prevention of Terrorism Act (PTA) are relentessly used to carry out arbitrary arrests and detentions. In this scenario, any counter-terror law must be viewed with utmost critical scrutiny.

Radicalisation as the justification for oppression

For some reason, this notification was made by the Tourism Minister which is yet another manifestation of a Government which seems to be wandering around distraught like the proverbial headless chicken, apt to seize on any distraction to serve its purpose. And therein lies the danger. Among the most recent arrests this week is a photojournalist covering demonstrations by health workers and most bizarrely, the Mayor of Jaffna who has apparently been arrested for prescribing blue uniforms for his staff. The reason for the arrest is reportedly that they resemble the uniforms worn by the now defunct ‘police’ units of the Liberation Tigers of Tamil Eelam (LTTE).

But the commonsensical question is, why not deal with this act (if it needed to be dealt with) administratively? Are we in some surreal land that arrests will soon be forthcoming for breathing, talking and living? So the Cardinal who speaks on behalf of his flock may well be advised not to indulge in unChristian language but to recognise the failure of the State for what it is. The trials and tribulations of all those who suffered following the attacks on Easter Sunday exactly two years ago mirrors the same helplessness and agony of countless others in this country.

It is only when that common collectivity of anguish is recognised and acted upon, that we will see the behemoth of the State moving in response. Until then, stirring calls for justice and stern vows that retribution will follow if accountability does not ensue by Sri Lanka’s Catholic Church is good fodder for television entertainment.

Sadly however, its impact will stop there.