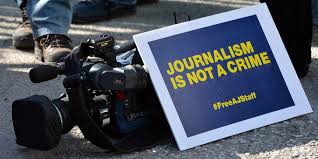 The Free Media Movement vigorously protests to the Sri Lanka Military for intimidation caused towards provincial journalist Shanmugam Thavaseelan, of ABC Media network, who had taken photos of a public protest at A’lampil in the Mullaitivu District.

Thavaseelan was detained for more than two hours, and the Free Media Movement consider it as an act prohibiting the conduct of his professional duties and a threat to the freedom of expression.

The Free Media Movement wishes to stress the fact that It is an obligation of the Sri Lankan Government including the armed forces to create a democratic environment for media personal to perform their duties without any obstacles.