The interlocutors of Bodu Bala Sena and Sinhala Ravaya, spewing a heavy dose of religious intolerance, act as the Buddhist equivalent to fundamentalist mullahs 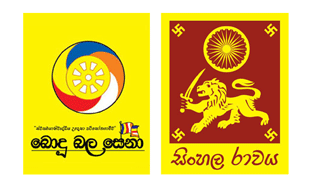 Ranga Jayasuriya
Religious groups compete with each other for their constituency, just like terrorists, trade unions, or any other factions of competing ideologies do. That would perhaps explain the increasing militant activism of two controversial Buddhist groups: Bodu Bala Sena and Sinhala Ravaya.

On Saturday, protesters affiliated with Sinhala Ravaya stormed a house which is used as a Catholic religious centre in Nawala. They assaulted a male resident in the house in the presence of his wife and the child, accusing him of ‘defaming Buddhism.’ On Friday, a mob belonging to the same Buddhist group laid siege to another Catholic religious centre in Kahatagahapitiya, Galle.

Earlier in the week, the All Ceylon Jamiyyathul Ulama, in order to wade off a growing anti-Muslim propaganda, spearheaded by the monks associated with the Bodu Bala Sena, announced it would suspend the issuance of Halal Certificates. (The ACJU described the decision as a necessary sacrifice. The ACJU itself is culpable of covertly promoting a radical brand of austere, imported Salafi Islam, which is now extending its tentacles in the East. However, that should be the focus in a separate essay).

Challenging the integrity of prominent monks

The Bodu Bala Sena, which was not satisfied with the ACJU’s announcement, threatened to launch an islandwide protest in order to ‘eradicate’ halal by 31 March. The interlocutors of the Buddhist group, led by its General Secretary, Ven. Galaboda Aththe Gnanasara went a step further, challenging the integrity of some prominent Buddhist monks of liberal outlook, such as Ven. Bellanwila Wimalaratne Thera. Gnanasara Thera accused those Buddhist monks had been turning a blind eye, when “the halal system came into play five-six years ago, and while Christianity was taking root in the country.”

Those interlocutors of Bodu Bala Sena and Sinhala Ravaya are spewing a heavy dose of religious intolerance and are acting as the Buddhist equivalent to fundamentalist mullahs in the Muslim world. Even the outward-looking autocrats in the Muslim world, ranging from Suharto to Mubarak knew how to keep a tab on Islamic extremism. Mubarak, for instance, jailed en masse the activists of Salafi groups and the Muslim brotherhood, a move, which despite its negative impact on civil liberties, could have been a necessary evil in order to wade off the country from a venomous religious radicalization, whereas the current regime in Colombo seems to be exploiting the religious extremism spread by Bodu Bala Sena and Sinhala Ravaya.

The initial indifference on the part of the government towards the Bodu Bala Sena activism has now turned into an endorsement. It was none other than the powerful Defence Secretary, Gotabhaya Rajapaksa who was the Chief Guest at the opening of Bodu Bala Sena’s Buddhist Leadership Academy, last week, in Pilana, Galle. Speaking at the event, Rajapaksa agreed with an earlier remark made by the Bodu Bala Sena Leader, Ven. Kirama Wimalajothi Thera that, “Some people won’t learn a lesson, if they are told lightly; therefore, it should be done severely.” That is a tacit endorsement of Bodu Bala Sena’s often violent activism and it could also explain the inaction on the part of the security apparatus and law enforcement agencies towards attacks carried out by the activists of those groups against the practitioners of other faiths.

The current regime, which has been decried by much of the civilized part of the world and its own citizens of liberal democratic disposition, derives much of its support from populist and often regressive manoeuverings, which are meant to cater to its nationalist constituency. It is this constituency that is extremely susceptible to religious radicalization, set in motion by Bodu Bala Sena’s brand of militant Buddhist activism. And this government is playing with fire; instead of intervening to reverse the trend, it is tacitly promoting it.

The current government, like many of its predecessors, is using Buddhism in order to legitimize the regime. The religious and cultural ethos had been exploited to enhance the image of the regime and its main protagonists. That partly explains the reluctance of the government to act against emerging Buddhist extremism.

However, the religious radicalization already has an impact on the government’s apparatus. Last week, a British tourist, who sported a tattoo of the Buddha on his arm, was deported on arrival at the Katunayake International Airport. Earlier, the Health Ministry sent a circular to public and private hospitals, banning irreversible birth control operations. Nowadays, the police often fail to act, and bend backward when confronted by marauding mobs of extremist Buddhist disposition. It seems the regime apparatus is not immune from the pervasive influence of emerging religious extremism.

Religious intolerance had already taken its toll on the social fabric of the country.

Sri Lanka, sadly, has a large swathe of an unhappy young population. That particular segment of the population provides a receptive audience for the preachers of religious extremism. Madrasas in Peshawar, which were the breeding grounds of the Taliban were packed with despondent youth who were groomed to be Islamic radicals by Pakistan’s Inter Services Intelligence and mullahs in the early 90s.

The swelling ranks of the Bodu Bala Sena and Sinhala Ravaya is an ominous sign of a potential religious conflagration in the making. In a previous interview with the writer, Kirama Wimalajothi Thera said his association was planning to recruit 100,000 lay followers and monks within the year. The endorsement of Bodu Bala Sena by the Defence Secretary could only make things easier for Bodu Bala Sena in its recruitment drive.

The increasing activism of the two groups: Bodu Bala Sena and Sinhala Ravaya are also proof that both the groups are competing with each other for supporters from their receptive audience. That is pretty much the strategy of terrorist groups as well. The Liberation Tigers of Tamil Eelam pushed the threshold of violence, by carrying out massacres of Sinhala civilians and later opting for suicide terrorism in order to secure a greater support from the then hardening Tamil opinion.

While this writer does not suggest Buddhist extremist groups would push the threshold of violence as far as the LTTE did, it is obvious that these groups are also becoming rhetorical and violent. Sinhala Ravaya held a protest in front of a Muslim owned clothes store in Maharagama, days before Bodu Bala Sena held a rally in the town, known for its receptive audience for Buddhist activism. (The ultra nationalist Jathika Hela Urumaya came second, ahead of the main Opposition UNP in the Maharagama electorate during the General Election of 2004.)

Sri Lanka has historically suffered from bouts of religious extremism. During the latter part of President Chandrika Kumaratunga’s tenure, the country witnessed a wave of attacks carried out against Catholic churches. A grenade was also thrown at a musical show featuring Indian movie star Shah Ruk Khan. However, the then President acted decisively, ordered a series of arrests, and within weeks, then budding Buddhist radicals withdrew into their closets. The incumbent President should take a leaf from his predecessor before his indifference engulfs the country in a religious conflagration.
COURTESY:CEYLON TODAY/DBS