The Impeachment: The unmet task of political Opposition 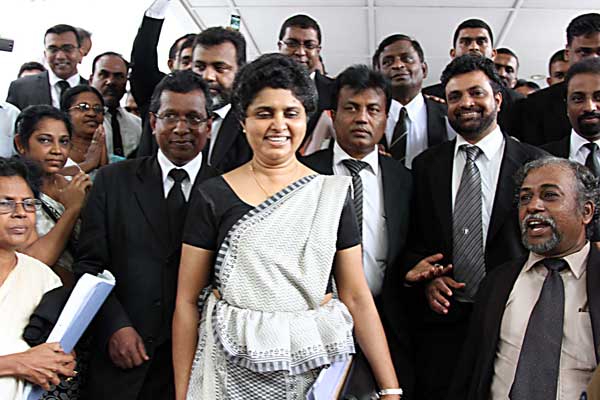 Jehan Perera
The government appears determined to go ahead with the impeachment of the Chief Justice. So far the attempts to broker a mutually acceptable solution have not yielded success. Not even the messages sent by the highest religious dignitaries or their joint statements have had their desired impact. There have also been civil society initiatives to find a way out of the growing confrontation. They have sought to convey to the government leadership that it has lost the intelligentsia’s support on the matter of the impeachment and that any good society needs checks and balances as exemplified by an independent judiciary. But it appears that the peacemaking efforts of civil society groups have also come to naught.
It also seems that the parliamentary members in Sri Lanka, including both government and opposition, are very concerned about the powers and privileges of Parliament and do not want those to be compromised. There is an emphasis on issues of sovereignty of the people and of Parliament. It is argued that no judicial powers have been entrusted to the Parliamentary Select Committee that is investigating the charges against the Chief Justice, and so the Supreme Court cannot issues notices on them. There is a focus on the powers of Parliament while there is an even bigger issue that needs to be addressed. This is the fact that the impeachment threatens the effective collapse of judicial independence. What an impeachment of the Chief Justice will mean to the rest of the judiciary in relation to political interference has to be the greater priority.

The main challenge in society today is to safeguard and strengthen the system of checks and balances to control the abuse of power that comes from having absolute power. The main political features in Sri Lanka are the ongoing concentration of power in the hands of the government leadership. This gives an impression of stability, especially when opposition members are constantly joining the government and eating out of its hand. The opposition parties have so far not shown themselves able to mount a challenge to the government. At this time the opposition parties and civil society are marginal actors. The opposition is fragmented without much appeal to the people. There is also a culture of fear that keeps people from mobilizing against the government. There is also co-optation that needs to be struggled against.

As the Burmese opposition leader Aung San Suu Kyi has said, “I think we have to accept the sad fact that people are attracted by power. I have found that perfectly decent [people] are flattered when the ruling governments bathe them with some attention, makes a fuss over them, and this is true for Burmese people as well as for non-Burmese people who come to Burma. And this attraction that power and influence has over humanity in general works against those who are in the dissenting faction because we are who are dissidents, we don’t have the power, and people tend to think that those who are in power must be in power for good reasons when actually there can be very, very horrible reasons for people being in power. So I think what we have to do is to raise people’s awareness as to where it leads to in the long run – if you support those who should not be supported.”

Although the war ended more than three and a half years ago, Sri Lanka has not yet become a stable, democratic country. The disappearances, abductions and killings that took place during the war time are very much less today. But there continues to be a large military presence in the North and East, and the military intrudes into civilian life more than is necessary now that there is no more war or militant activity. The increase in the level and brutality of violence, despite the large security presence and sometimes due to it, is an indication that our society has still not healed from the war. Robberies and thefts have always been a problem. The real and imagined fear of the White Van is there to reduce the activism of those who are trying to even criticize and reform the government.

It is significant that the violence we see is happening despite a massive investment being made in security and security forces. The Chief Justice of Pakistan recently made a speech that has relevance to us in Sri Lanka. He said, “Gone are the days when stability and security of a country was defined in terms of numbers of missiles and tanks as a manifestation of hard power available at the disposal of the state.” Therefore, he said “A heavy responsibility lay upon Supreme Court judges for being the guardians and protectors of the constitution to uphold the canons of the constitution’s predominance and its supremacy over all other institutions and authorities.” The role of the judiciary in maintaining the integrity of the system of democracy, and its necessary checks and balances, cannot be underestimated.

So far the Supreme Court appears to be standing firm in upholding its constitutional position. However, the political position of the government in the unequal contest appears to be unassailably strong. It has a 2/3 majority in Parliament and a popular President heading the executive branch of government. The even greater strength of the government is its ability to get a substantial majority of people to agree on its course of action. In terms of using the state and private media, the government voice is much more powerful than any other. Government leaders, exemplified by President Mahinda Rajapaksa, also have an exceptional ability to put across the government’s point of view in a manner that is comprehensible to the masses of people.

In the absence of a strong opposition that is equally competent at taking its message to the people, it is unlikely that the explanatory powers of either the judiciary or lawyers can match that of the government when it comes to winning the support of the people. The fact that the Bar Association of Sri Lanka has at last decided to file action before the courts objecting to the manner of the impeachment is an indication of how the larger part of the intelligentsia in the country thinks. They are deeply concerned about the weakening of the democratic system and its checks and balances. But they are unlikely to be the ones to win the debate for the hearts and minds of the people. This is the unmet task of the political opposition.

Whether in Pakistan or Egypt, where powerful governments also took on the judiciary, it was not civic or legal action by themselves that halted those governments. Those powerful governments were forced to step back by mass movements in which hundreds of thousands of people participated. Those mass movements were led by opposition political parties, which had both leaders and party machineries that were equal to the task. However, in Sri Lanka, the political opposition has not mobilized a mass movement of protest against the impeachment. Instead it seems to be more interested in fine tuning the role of the legislature in relation to the judiciary. This needs to change and there needs to be a larger vision. The way is through increasing the level of political awareness of the people.
IS