The Impact of Militarism in Myanmar and Sri Lanka – Basil Fernando 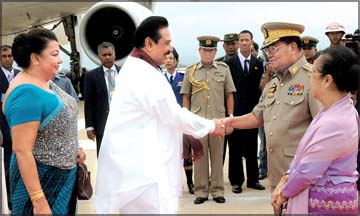 Image: President Mahinda Rajapaksa was  welcomed by Senior General Than Shwe, ruler of the Myanmar in June 2009.

The Burma (now Myanmar) was a British colony and the style of the British administration had been introduced also to that country. Around the same time as India and Sri Lanka, Myanmar also gained its independence.

Prior to the independence, a leadership emerged from among the freedom fighters of Myanmar who were preparing themselves to be the new rulers of the country. The acknowledged leader among them was General Aung San. However, Aung San and those close colleaguse of his who were tipped to be the Cabinet of Ministers after independence were all assassinated as they were having a meeting.

Thus, at the beginning of the independence in Myanmar, there was a vacuum of leadership. After few years of independence, the first coup was attempted and lasted for a short time. Thereafter, there was a brief period of democratic government which was overthrown by way of a coup led by General Ne Win in 1962.

What was the impact of the long years of military rule. in Myanmar?

First of all, the entire system of governance was changed gradually by replacing all the norms of liberal democracy and the rule of law. The law under the military rule were any of the orders issued by the leader of the military; General Ne Win.

The whole structure of public institutions were changed and the administration was gradually handed over to be entirely controlled by the military. During the colonial period, the Burmese has developed a very sophisticated civil service structure. Within this structure, very able leaders have emerged. After the coup, many of them left or were forced to leave Burma. Many of them held quite senior positions in international organizations as well as in the administrations of some other countries. Among such able leaders was U-Thant who became the Secretary-General of the United Nations. Among the civil servants were also many Indians who have migrated and got assimilated into the Burmese society. The military regime expelled most of them out of Burma.

The electoral system which was to be the means by which representatives were to be selected to govern the country was discontinued. Instead, the leader of the military with those who he chose personally to hold senior positions, ruled over the country.

It was the system of administration of justice which was established during the colonial period that was completely replaced. By a gradual process, independence of judiciary was discarded and the defense of the military regime became the main target assigned to the judiciary. The complete executive control of the judiciary happened over a period of time and the tradition of independence of judiciary established in the earlier period was discarded. Various types of theories were developed in order to justify this change. This went on to such an extent that even after the end of the direct military rule in 2011, the courts will read judgements which were dictated to them by the executive. There are instances where the judges, before reading such judgements, apologized to the litigants stating that he is merely was handing down the judgement that is given to him from above.

The policing system was changed completely by displacing all the rules that were introduced earlier in order to protect personal freedoms by preventing illegal arrests and detentions. The period of military rule was a period where large numbers of persons were arrested and imprisoned over long periods of time for engagement on any activities’ for trying to promote democracy and rule of law. Such activities were seen as the subversive activities and for which it was possible to imprison persons for indefinite periods of time.

This process which started with General Ne Win himself acquiring enormous wealth by utilizing what was formally the national resources for his personal gain followed by his closest colleagues. Then it spread into even the rank and file among the military.

There was a period when there was large scale fleeing away from Myanmar by particularly the peasants because their lands began to be acquired by interested military officers in different areas. As a result of such forced acquisitions, the people often fled to other unclaimed areas like the forest. They cleared land and began to cultivate. However, when the harvesting time came, military officers would come to grab what they have produced and thereby there was increase of poverty and even the instances of starvation.

In short, Myanmar became virtually a place controlled entirely by the military where neither the personal freedoms nor even the right to personal properties were respected or protected.

Also, in Myanmar, there had been long protracted armed struggles led by minority groups. The military approach to these conflicts was not to seek political solutions to these problems but to engage in military confrontations. Thus, there was protracted periods of armed conflicts throughout the period of the military rule. Military used these situations of armed struggles in order to justify its own arbitrary powers, not only to control the minorities but also to control the entire population.

Under the military, gradually Myanmar became a mafia state. The large scale production of illegal drugs such as heroine and other things became industries controlled by the military. Every kind of illegal activity was allowed for those who had patronage of the military leaders.

During the military regime, gradually Myanmar came under severe international condemnations and there were impositions of sanctions. Virtually, Myanmar became a bankrupt state with which the other countries did not want to engage in normal business transactions.

Burmese currency became highly worthless and devaluations of currency took place constantly. This affects both the internal trade as well as the living conditions of the people and also the international trade.

The result of all these was that under the military regime, Myanmar became one of the most corrupt states in the world. With the enlargement of corruption which spread into everything, there were large scale fleeing of people to other countries such as Thailand where they often remain as illegal migrants working in virtually semi-slave conditions.

It was all this that led to constant struggle by the people against the military which climaxed in an uprising in 1988. With that, began the demand for rapid transfer to democracy. However, that too was a protracted struggle. The Aung San Suu Kyi, the present leader of the National League Democracy (NLD) was kept under house arrest for a long period and many political prisoners spent long years in prisons because of their support for the democracy movement.

It was for the first time, that a democratic form of government was elected in 2015. However, despite of the election of representatives, the actual control of the governance as well as the economy was mostly in the hands of the military itself. It was a difficult compromise for the newly elected democratic government. However, due to the long period of the military rule and the complete destruction of all the infrastructure of democracy, the process of democratization was naturally to be a slow one. And it had to be done within a framework where the military was still controlling most of the aspects of life.

Despite of not very spectacular performance by the first democratic government, the people re-elected the national league of democracy with a larger mandate in November 2020 ,where the party won 83% of the votes. That showed how much of frustration there was among the people about the manner in which the military had destroyed their country.

However, the military perceived such a massive victory with such an overwhelming mandate, o the representatives of the people as a threat to the continuity of military control over all affairs of Myanmar with such an overwhelming mandate, it was possible for the NLD to pass stronger legislation to strengthen the democratic institutions and also to strengthen the national economy. The very fact of the national resources being reclaimed from the military itself would have brought new resources which would have benefited the nation as a whole.

The coup was meant to counteract this process of democratization and re-strengthening of national capacity to control its own resources and also to protect the rights of the people.

In Sri Lanka, the process of attacking the democratic institutions and the rule of law did take place without there being a military coup. 1972 and 1978 constitutions introduced the idea of a semi-dictatorship. 1978 constitution virtually gave all power to a single person by creating the position of executive presidency.

Major consequences of change from 1978 up to now have affected the Sri Lankan society to a great extent the same way that military rule had affected Myanmar. The same manner, particularly in the area of acquisition of national properties for private use has become a major threat to the Sri Lankan economy. The of mismanagement the economy has made Sri Lanka one of the most indebted nations. In the area of the protection of civil liberties also, there had been heavy losses and the constitutional protection of rights have been undermined severely by the use of various types of draconian national security laws. The use of enforced disappearances which has happened several times after 1978 also undermined the criminal justice process altogether. The arrest, detention, torture and killings followed by disposal of bodies is what is meant by enforced disappearances. This has happened large scale in Sri Lanka during this period.

In one aspect , that is regarding extra-judicial killings by various means such as enforced disappearances, Sri Lankan experience is much worse than in Myanmar There imprisonments were more than in Sri Lanka, but killing after arrest were much less.

In Sri Lanka, after the election of the new president and the government, there has been more and more military being brought directly into the running of public affairs. This will aggregate the already desperate situation created since the enactment of the 1978 constitution. If this process of militarization continues and if the basic concept of semi-dictatorship as introduced through the 1972 and 1978 constitution are not replaced, Sri Lanka will also acquire the same problems as experienced by the people of Myanmar. Further, Myanmar had acquired the reputation of being a Pariah State in the international community from the point of view of economic as well as political relationships. If Sri Lanka continues in its present path, it also cannot avoid falling into the same trap.

Both in Myanmar and Sri Lanka the state is dysfuncrional and the state is incapable of carrying out the normal functions of governance.