The Ides of March: Protests, Discontent and Disconnects – Ruki Fernando 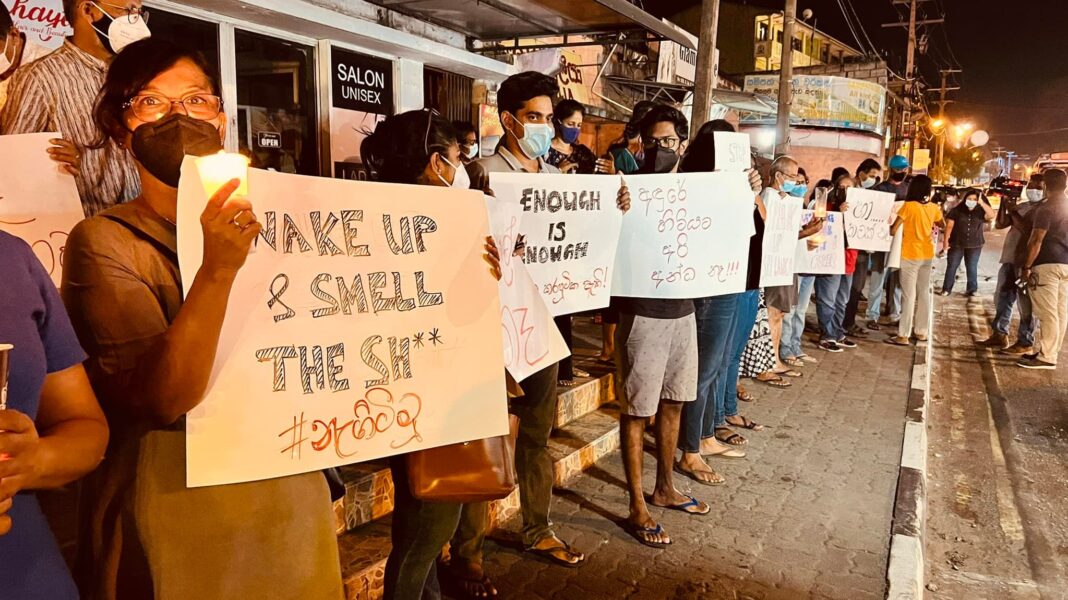 The month of March has seen widespread discontent expressed by many Sri Lankans from all walks of life on new and old social, economic and political concerns leading to more than 100 street protests across the country, although many of the protests and protesters remain disconnected.

On March 1, eight youth decided to protest by holding placards and lighting candles at Kohuwela junction as their neighborhood was in darkness due to electricity cuts amid shortages of fuel and gas and rising costs of essential consumer goods.

“Uniformed policemen questioned some protesters trying to find out who the organizers were. Men in civil clothes who appeared to be intelligence personnel photographed protesters.”

They wanted to stand up for their rights, demand systemic change beyond immediate issues, create a new political culture and encourage others to do the same although they didn’t know how it would go or whether it could lead to a Sri Lankan Spring.

As news of the protests spread, mostly by word of mouth and social media, more people joined in. When I went on March 3 there were about 30 people but by the fourth day more than 100 protesters stood on the four sides of the busy Kohuwela junction and one young girl performed a skit of doing household chores in the dark.

Several protesters had travelled from other towns and when the initial organizers were asked “why don’t you start one in other locations?”, the response was “why don’t you start in your neighborhood?”. Several people then started planning protests in their own areas. Others, inspired through word of mouth and social media posts, started new protests. More than 60 neighborhood protests have been held in at least 19 places in the Colombo, Gampaha, Kalutara, Kandy and Nuwara Eliya Districts between March 1 and 22.

Today six protests are planned, including in one new place in Colombo city. Some started with small numbers of two to eight people and increased gradually to as much as 200. A protest that started on March 21 drew about 150 people on the first day. In some places people passing by stopped their journeys and joined. One of them, from Badulla, was going to wait 10 minutes but stayed until the end.

In another place, a cyclist stopped and joined a protest. Some motorists stuck in traffic or passing by honked or shouted their support. Organizers received phone calls encouraging them to continue the protests and offering support. In one place, milk packets and buns were offered. The protesters have used a notice to publicize times, days and placesof protests; they maintain silence while holding placards.

All except two of the protests were held in the late evenings with lighted candles and lamps during times of darkness due to electricity cuts, and lasted about an hour.

The protesters ranged from elderly in their 80s to people in wheel chairs, the middle-aged, youth and children with their parents. Many said that they didn’t want to see their country ruined.

One medical doctor said he could migrate overseas but had no intention of doing so and that he was participating in the protests to make Sri Lanka a better place. Some of the protests were initiated by women and in most places there were many women who spoke to those passing by on foot or in vehicles struck in traffic, media and the police.

On one occasion almost all the protesters were women. On another occasion, two women protested alone. One of them, a mother of two, felt strongly about doing “something” to show disgust and anger about the crisis, messaged a friend and decided to stage a protest. They were disappointed about the lack of support but decided to go ahead and were thinking about organizing another event.

Uniformed policemen questioned some protesters trying to find out who the organizers were. Men in civil clothes who appeared to be intelligence personnel photographed protesters. But there were no obstructions and protesters from some locations said the policemen appeared sympathetic. Some elderly people took the opportunity to explain the dire economic situation to the policemen. 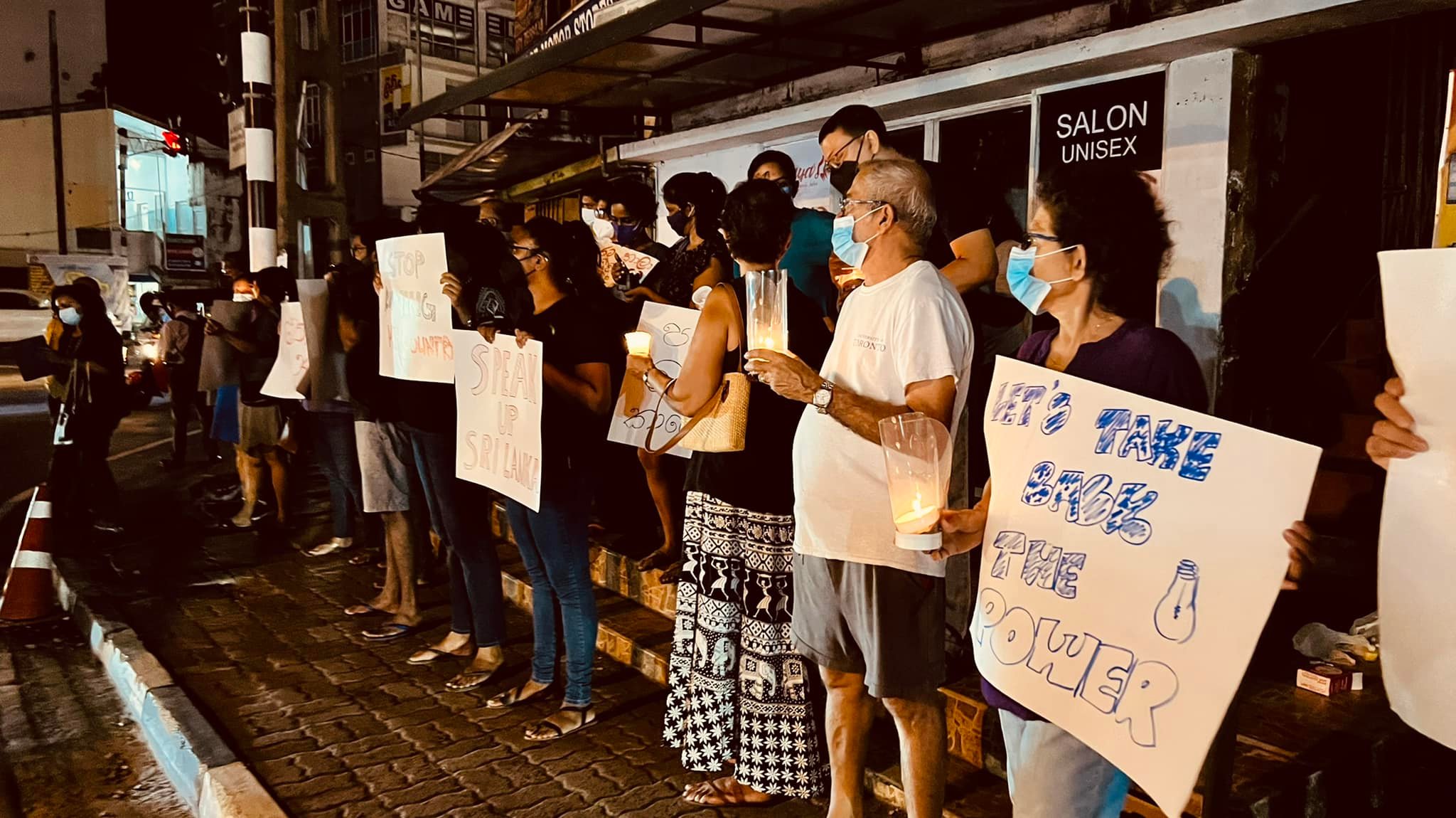 There have been daily protests in Kohuwela but regularity in other places ranged from one day to a couple of days a week, some on weekdays and others on weekends. While most seemed eager to continue, it’s not clear how often and how long people would gather. Many came in their vehicles so parking and fuel scarcity were considered in selecting locations and regularity. Everyone I spoke to was strongly motivated to speak out with many joining a protest for the first time and some fearing pressure from family members, work colleagues and reprisals from the state.

There are also fears of the protests being portrayed as being in favor of one political party. From the beginning, the notices informing the public and statements given to the media emphasized that these were citizens’ protests not affiliated with any politician or political party.

Given the diverse background of protesters, there were various ideological and political viewpoints visible, with some demanding that the president leave office with slogans such as “Gota Go Home” and some expressing no faith in the opposition parties and wondering who would govern if the President and/or government resigned. Several people expressed concerns about politicians showing interest in joining the protests.

There were no common positions on solutions to the economic crisis including issues of debt restructuring and IMF assistance and longer term demands about governance. But for now the continuing discontent with fuel, electricity, gas and milk food shortages has ensured the continuation and spreading of the protests that started largely among urban, middle class, English speaking people.

There have been attempts by protesters to connect with each other while retaining autonomy and diversity and they seem to inspire others to start protests in their own places. 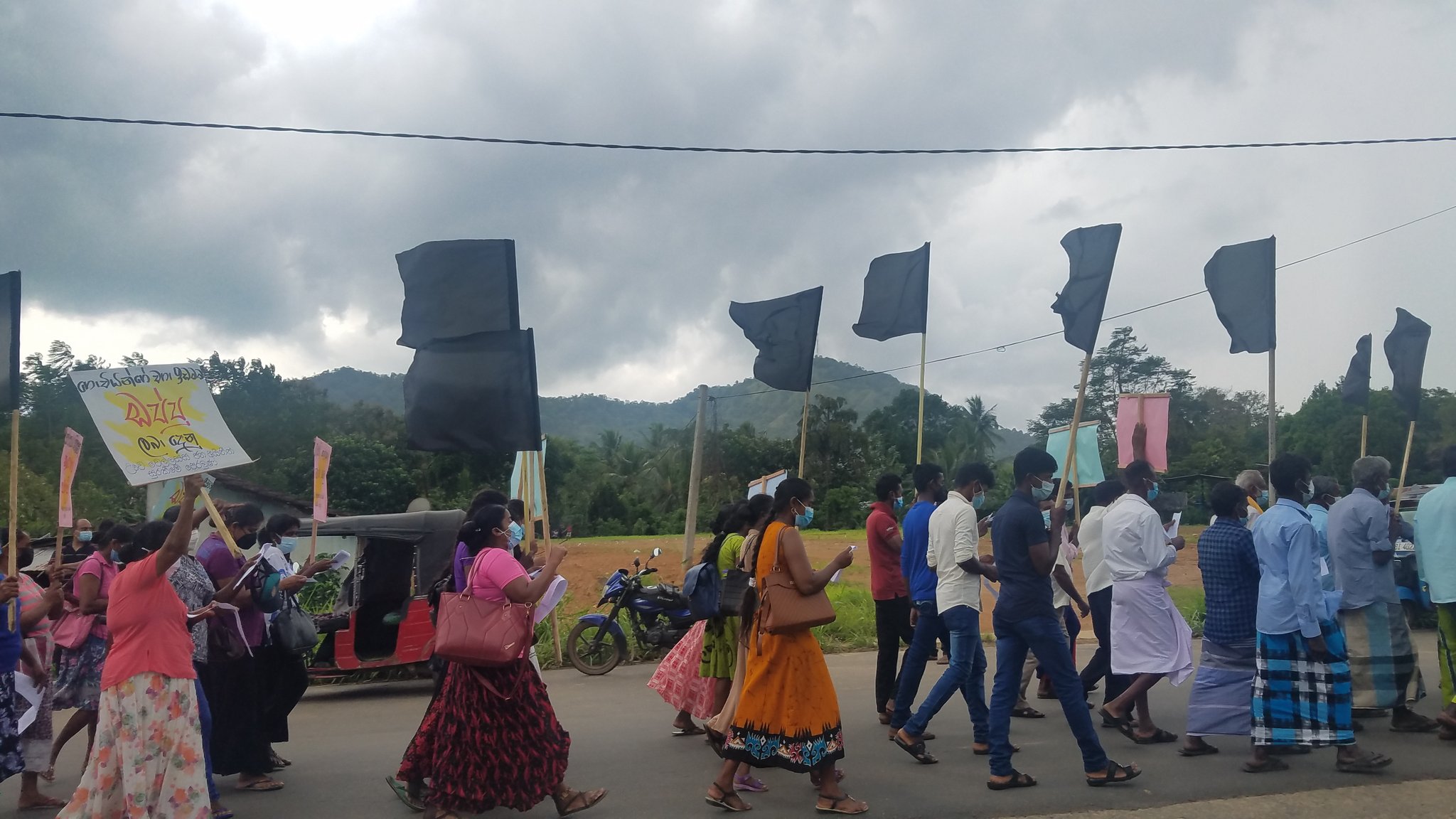 A signature campaign was held to abolish the PTA in the Jaffna, Batticaloa, Kandy, Nuwara Eliya, Galle and Matara Districts. In Negombo, fisherfolk protested against destructive development projects that were harmful to the environment and livelihoods as well as increasing prices of fishing gear and fuel, with participation of the Catholic clergy. On March 12, several thousands, mostly farmers, supported by Buddhist monks, participated in a march and protest rally in the Moneragala District against the takeover of lands for a sugar plantation by a Singaporean company.

On  March 7 and 8, about 100 estate workers held a day and night protest outside the Labour Ministry in Colombo demanding that the Employers’ Federation sign the collective agreement. Health workers resumed provincial level protests in the districts of Colombo, Gampaha, Kalutara, Ampara, Batticaloa, Galle and Hambantota about salary anomalies that have not been resolved for many years despite protests and strike action.

The Inter-University Students Federation engaged in a nearly week long satyagraha campaign in Colombo demanding the re-opening of universities and the withdrawal of the Kotelawala National Defense University Act. On March 21, the monthly protest was held in Negombo demanding truth and justice for easter attacks.

It will be challenging to address the ethnic, class, geographical and other disconnects between long time concerns such as enforced disappearances and accountability for war time abuses, land grabbing, rights of tea estate workers, health and education and more recent concerns such as rising prices of food and other essential consumer goods, shortages of electricity, fuel, gas and the economic crisis.

On March 10, families of disappeared, mostly Sinhalese, held a protest and signature campaign outside the Supreme Court complex calling for protection and justice for senior retired police officer Shani Abeysekara, who had led investigations into several cases of enforced disappearances where Army and Navy officers stand accused and other sensitive cases.

The families later protested outside the Ministry of Justice demanding the implementation of a decision to grant Rs. 6,000 a month interim relief to families of the disappeared. In the North and East, Tamil families of the disappeared organized protests demanding to know the whereabouts and fate of their loved ones who had been forcibly disappeared during and after the war. Similar protests were held in Batticaloa, Mullaitivu, Kilinochchi and Vavuniya coinciding with International Women’s Day.

On March 19, Tamil families of the disappeared held a protest during the visit of the Prime Minister to Jaffna and the next day, as they travelled to protest against the Prime Minister, the mostly elderly and distraught women faced obstruction from the police. Tamils in Jaffna protested against the laying of a foundation stone for a Buddhist temple, which is seen as ethno-religious colonization.

As discontent increased, some ministers were sacked and others resigned or refused to continue work. Last weekend, a 29-year-old man was murdered after a dispute at a fuel line and in the 48 hours preceding that, three men in their 70s died after standing for prolonged periods in long fuel lines. This week, Indian media reported that Sri Lankans fleeing with children to seek asylum in India citing lack of food, soaring prices and unemployment.

As tensions increased at fuel lines and spontaneous protests spread, the military was deployed to fuel stations, increasing fears of further militarization and repression instead of addressing the causes. While I have focused on the street protests, there have been significant numbers expressing discontent online, often using creative satire, including memes.

The extent of mainstream media coverage of the different street protests has varied depending on what the protests were about and geographical regions, with some protests receiving wide coverage and others very little or none. But it will be challenging to address the ethnic, class, geographical and other disconnects between long time concerns such as enforced disappearances and accountability for war time abuses, land grabbing, rights of tea estate workers, health and education and more recent concerns such as rising prices of food and other essential consumer goods, shortages of electricity, fuel, gas and the economic crisis.

( This article was first published in GroundViews on line site)