The government, the LLRC and what civil society can do 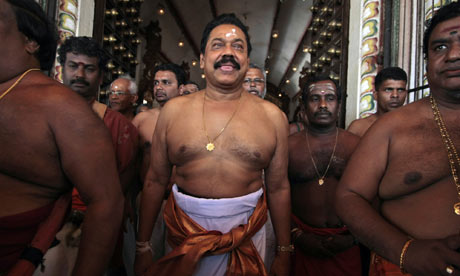 “The entire section of the LLRC Report that deals with the issue of missing and disappeared persons and the trauma it has wreaked on the lives of possibly tens of thousands of families has been entirely ignored by the LLRC Action Plan. As many as nine LLRC recommendations that are in paragraphs 9.43 to 9.60 are missing from the LLRC Action Plan.”
An entrenched government
The government has overcome several formidable challenges to itself in the past few weeks. It
has now secured control over the Eastern Provincial Council even though it failed to win the majority of seats in it.
The government’s ability to thrash out an agreement on favorable terms with the Sri Lanka Muslim Congress is an indication of its virtually unassailable political position in the country. Although the SLMC was clearly not happy with the terms being offered to it, the leadership of the party has evidently decided that joining the government is better than being in opposition to it. Those who politically oppose the government and considered a threat run the risk of losing all.

University crisis
An indication of the difficulties faced by those who act in opposition to the government can be seen in the case of developments taking place in respect to the ongoing university crisis. The university teachers have been on strike for three months, with little sign of the problem being settled through mutual compromise. The President of the Federation of University Teachers Association which is spearheading the strike has complained once again that he has been at the receiving end of death threats.

Death threats and arrests
The arrest of the convener of the Inter University Student Federation is related to this ongoing struggle. The government has accused the teachers and students alike of being party to a political conspiracy against it. The IUSF convener has been remanded on the grounds that he used violence in one of the demonstrations against the government.

There is a reasonable apprehension that the action against the student leadership is a preliminary indication of repression to follow in order to break the strike by the university teachers. The government has shown that it continues to have public support by winning successive elections. But no amount of electoral mandates can justify the coercive or extra legal suppression of dissent. In the past, Sri Lanka has experienced several occasions where drastic measures were used to overcome protests against them.
In recent times this has included even at protesting garment factory workers and fishermen, which resulted in a death in each case. In the more distant past there was even the selective assassination of trade union leaders that cowed the rest of the protest movement into giving up the struggle.

Not visible
The negative activities that lurk beneath the surface and the sense of menace that opposition groups are subject to is generally not factored in by outsiders to Sri Lankan politics. The visiting parliamentarians from the Commonwealth countries were no exception to this. Most of them appear to have left Sri Lanka impressed by its democracy and post-war development. The spectre of a boycott by Commonwealth leaders at next year’s Heads of Commonwealth Governments Summit to be held in Sri Lanka has faded as a result. It seems that those who stay away will only isolate themselves from the mainstream sentiment within the Commonwealth which is more willing to see the plus points in Sri Lanka than its minus points.

Contentious visits by Blake and UNHRC
The more contentious visits by the US Undersecretary of State Robert Blake and the technical team sent by the UN Human Rights Commissioner also does not appear to have led to any adverse outcome. Both sets of visitors expressed their interest in the implementation of the recommendations of the Lessons Learned and Reconciliation Commission appointed by the President. The LLRC submitted its final report to the President in November 2011. But it was only in August 2012, nine months after the report was brought out in English that it was translated into the Sinhala and Tamil languages that would make it accessible to the vast majority of the country’s people.

Translations not accesible
The officially sanctioned Sinhala and Tamil language versions of the LLRC report continue to remain inaccessible to the general population. Only material that has been translated unofficially by NGOs is available on the internet and in print. But even these consist mainly of the final chapter which sums up the entirety of observations and recommendations rather than the entirety of the 388 page report and its findings. In addition the LLRC Action Plan prepared by a separate government committee that appeared on official websites in July of this year in the English language, continues to be inaccessible to the vast majority of the country’s people as it has not yet appeared in the two official languages.

Redressable justice
Despite its protestations to the contrary, the government is failing to give priority to the LLRC Report, especially where it concerns informing the general public about it. Ironically, this has had the effect of generating widespread interest among thinking sections of the population about the LLRC Report. Last week I visited Ampara in the ethnically mixed East of the country to take part in an awareness creation workshop on the LLRC Report and its recommendations. The workshop was held on working days, and those who attended it had to absent themselves from their places of regular employment. The 31 participants included NGO workers, government officials, provincial media persons and religious clergy. The level of interest was sufficiently high that only 3 of the 31 were absent on the second day.

Appreciation of the report
The group that took part in the workshop came from the Sinhala, Tamil and Muslim communities and the proceedings took place in both the Sinhala and Tamil languages with translators to ensure that participants could make themselves understood in either language. It was noteworthy that although the LLRC Report deals with sensitive topics such as human rights violations, singing of the national anthem, remembering the dead of all communities, devolution of power and a political solution and rule of law and impunity, there was no visible tension between the participants on these potentially contentious and divisive issues. On the contrary, the participants expressed their appreciation of the LLRC Report and its recommendations and its underlying sense of morality.

Ten most important recommendations
One of the exercises at the LLRC awareness creation workshop was for the participants to go through the list of 146 recommendations and identify the ten most important for their district. The participants were divided into four groups. While three of the groups focused their attention on the safer topics of improving the situation of women, children and disabled and supporting the livelihoods of war victims, one of the four groups focused their attention on the more politically contentious issues of violence, law and order and impunity and on addressing the roots of the ethnic conflict. The willingness to speak frankly was a positive feature and an indicator that the overall human rights situation in that part of the country is improving.

Primary role of civil society
What was interesting, however, was that when the participants were asked to provide five LLRC recommendations that they themselves could implement, all of the groups chose the less controversial ones. They chose close-to-the-ground issues that they could address, and inequities could be corrected, rather than macro political issues that they cannot force the government to do. They chose to work on issues where they could work on constructively and in cooperation with the government rather than in opposition to it. Unlike political parties, whose job it is to give political leadership and challenge the government on its failures, the role of civil society is build relations between the communities and between them and the government institutions that can serve the people’s interests. For the foreseeable future, this may be the primary role for civil society.
LS