THE FRIDAY FORUM COMMENTS ON THE NATIONAL PLAN OF ACTION : Need to IMPLEMENT LLRC 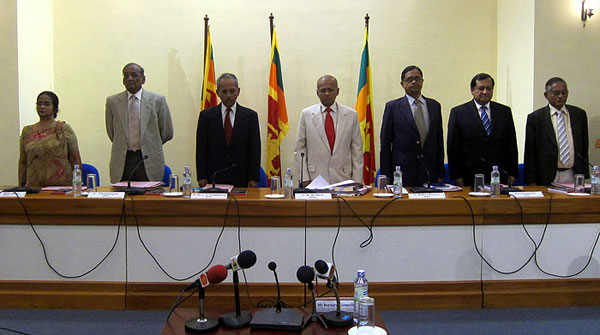 By Jayantha Dhanapala and Manouri Muttetuwegama on behalf of Friday Forum, the Group of Concerned Citizens

Over the last two years, the Friday Forum has been engaged with the Lessons Learnt and Reconciliation Commission (LLRC) by making submissions to it, commenting on its progress, following up on its interim recommendations and welcoming and making our observations on its final report. In that spirit, and particularly given the openings for reconciliation created by the LLRC Report, the Friday Forum would like to offer constructive criticisms regarding the recently announced National Action Plan to Implement the Recommendations of the LLRC to contribute towards public engagement with the State on meaningful reconciliation.

While the above categories are important, the Friday Forum believes that both the spirit of the LLRC Report and a salutary response by the State should consider the following priorities with respect to post-war reconciliation and sustainable peace:

” While the military continues to have a role in demining and other post-conflict activities, the Action Plan does not recognise that the military lacks independence, nor does it recognise the conflict of interest involved, when it is asked to investigate itself. There needs to be a clear vision of civilian control of the military and its conduct. “

It is now over three and a half years since the end of the war and any further time lost in implementing policies towards reconciliation would contribute towards squandering the great opportunity for national unity, tolerance and pluralism that came with the end of the war. In this context, we are concerned about the length of time for implementation, where many action items are claimed to require twenty four months or more for implementation while others are consigned to a proposed Parliamentary Select Committee whose time frame and prospects for consensus are vague. There is an urgency, particularly with respect to ongoing human rights abuses, as it can undermine the sense of security and end to violence that was supposed to have dawned in the post-war era.The LLRC Report meticulously addressed the grave issue of unlawful arrest and detentions:

“The Commission heard a number of allegations concerning persons taken into custody without any official record. The Commission therefore recommends that applicable legal provisions should be adhered to by the law enforcement authorities when taking persons into their custody, such as the issue of a formal receipt regarding the arrest and providing details of the place of detention etc. Such persons should be detained only at formal places of detention declared under the law. Adequate publicity should be given to such authorized places of detention, with access to next of kin.” (LLRC Report Recommendation 9.53)

However, the LLRC Action Plan has glossed over such concerns central to addressing the importance and urgency of human right abuses. There is no mention of the specific recommendations for a Special Commissioner on Disappearances or the deadline for the disarming of illegal armed groups both of which are vital to the sense of security of the people.

The spirit of the LLRC Report of addressing systemic concerns of governance and historical grievances is lost in the selective interpretations of recommendations, piece-meal actions and some-what defensive posture of a state-centred implementation program. The overall framing of the Action Plan does not see a major role for civil society, nor are the state processes seen to be enabling civil society, which were important features of the LLRC Report. Furthermore, the implementation of LLRC Recommendations is an opportunity to engage international organisations by soliciting their support after many years of a confrontational approach. That emphasis in the LLRC Report is also lost in the Action Plan. For example, on the issue of disappearances, the LLRC Report stated:

“All efforts should be made by the law enforcement authorities, in cooperation with relevant agencies, especially the ICRC, to trace the whereabouts of the missing persons and ensure reunification with their families. The families should be kept informed of the progress being made in that regard.” (LLRC Report Recommendation 9.50)

However, in the LLRC Action Plan there is no mention of the ICRC – an organization whose expertise and discretion in this field is well-known. The assistance of international organizations and civil society is especially important in tackling the multi-faceted needs of the families of the missing and the other war-affected people, including not only meaningful action to ascertain the fate of missing persons, but also the provision of livelihood support and of comprehensive health facilities embracing medical, nutritional and psychological elements.

Next, governance, rule of law and militarization are not recognised as central and systemic issues that have to be addressed. The LLRC Report was forthright on the role of the military:

“It is important that the Northern Province reverts to civilian administration in matters relating to the day-to-day life of the people, and in particular with regard to matters pertaining to economic activities such as agriculture, fisheries, land etc. The military presence must progressively recede to the background to enable the people to return to normal civilian life and enjoy the benefits of peace.” (LLRC Report Recommendation 9.227)While the military continues to have a role in demining and other post-conflict activities, the Action Plan does not recognise that the military lacks independence, nor does it recognise the conflict of interest involved, when it is asked to investigate itself. There needs to be a clear vision of civilian control of the military and its conduct. Related is the lack of attention given to the importance of independent bodies, whether it be independent mechanisms or commissions, particularly the Police Commission and Human Rights Commission, which relate to the Friday Forum’s earlier positions on the undemocratic character of the 18th Amendment. The need for language and communication training, including through modern Information Communications Technology, of military and police personnel and state officials is a priority in the announced policy of trilingualism of the Government. Likewise recommendations for the people of so-called “border villages”, the need for a Right to Information Act and Recommendation 9.285 to hold a special event expressing empathy with all the victims of the conflict need to be addressed.

Finally, the Parliamentary Select Committee (PSC), in particular, is claimed as the process to address many of the recommendations. The LLRC Report has the following to say about judicial review:“The Commission notes the representations made regarding the absence of constitutional provisions for judicial review of legislation. There should be adequate legal provisions for the members of public and other organizations to effectively canvass before the Supreme Court the constitutionality of any proposed legislation.

The time frame provided in the Constitution for canvassing constitutionality of proposed legislation before the Supreme Court, in particular of urgent bills, is grossly inadequate. The Supreme Court is called upon to make a determination in respect of urgent bills within a period of 24 hours or on a date not later than three days as specified by His Excellency the President (Article 122(1) of the Constitution).

Public intervention regarding proposed legislation is an integral part of a vibrant democracy. Therefore, the Commission recommends, that the Government and the Opposition make all endeavours to reach a consensus on an appropriate constitutional amendment, to provide for an adequate timeframe to challenge proposed legislation.” (LLRC Report Recommendation 9.228)

It is not clear why such a constitutional amendment on judicial review has to await the PSC as per the Action Plan. Government officials claim the PSC will address a political settlement to the ethnic conflict. Indeed, many of the recommendations attributed to the PSC that is yet to begin its work could in fact be addressed by existing state bodies and other legislations. For example the LLRC Report called for delinking of the police from the military:The Police Department is a civilian institution which is entrusted with the maintenance of law and order. Therefore, it is desirable that the Police Department be de-linked from the institutions dealing with the armed forces which are responsible for the security of the State. (LLRC Report Recommendation 9.214)

However, the Action Plan claims this will be addressed by the PSC. Furthermore, as opposed to the LLRC Report which is clear on the role for a body such as the PSC, that a political settlement should be “based on a proposal containing the Government’s own thinking on the form and content of the dialogue process envisaged” (LLRC Report Recommendation 9.237), the vision for the PSC in the Action Plan is not clear.

Therefore, the PSC could further delay many of the recommendations or, worse, become regressive on the issue of devolution which the LLRC Report advocated.

We have made our observations on the Action Plan in a spirit of democratic engagement.

Its contents and substance does not convince us that the Government is serious about substantial implementation of the LLRC’s recommendations which will rectify the lapses of the past and promote justice and dignity for the victims of war and the minorities leading to reconciliation and national integration. If this attitude continues any longer both Sri Lankans and the world will be justified in interpreting the stance of the Government as a deliberate and totally unacceptable act of resistance to justice and reconciliation for its own citizens.

The Friday Forum is a group of citizens committed to the advancement of democracy, social justice and pluralism in Sri Lanka. The Forum has regularly issued public statements on issues of common concern in the spirit of democratic engagement with a view to stimulating public debate and encouraging action from state authorities and other relevant parties.