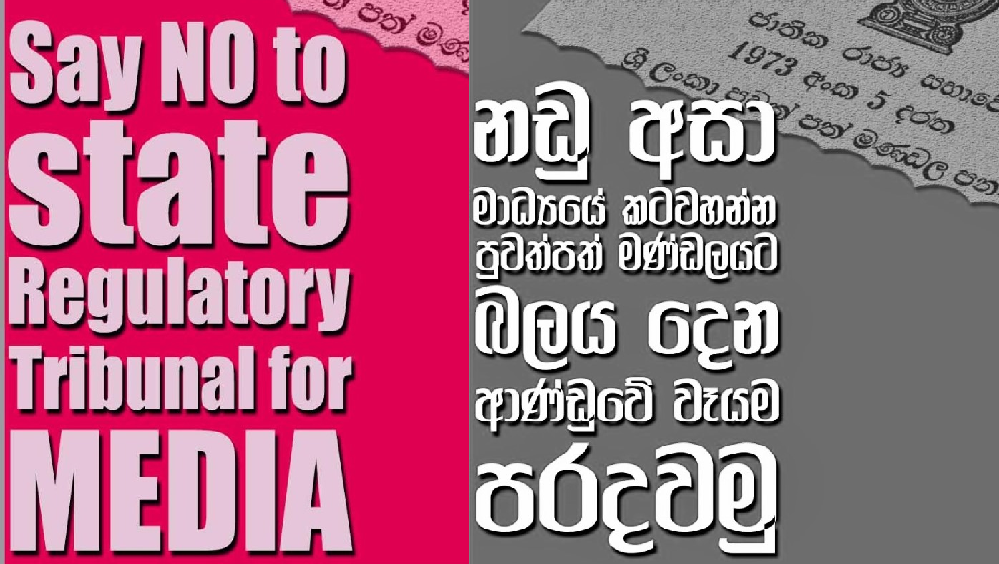 In a letter to the Secretary of the Ministry of Mass Media and Information FMM says that “it has perennially objected to a unilateral media regulatory process by a government agency with detrimental legal provisions. The Free Media Movement agrees to “a regulatory” methodology encompassing all media that is developed through the engagement of the media community, protecting media diversity, independence, freedom and social responsibility.”

Sri Lanka Press Council Law No. 5 of 1973 should be abolished! The Free Media Movement is strongly opposed to restructuring!

The Free Media Movement in its letter to the Secretary of the Ministry of Mass Media and Information vehemently objected to the structural reforms and reorganising of the Press Council Law, which is nearly 50 years old with legal provisions that are severely detrimental to media freedom, calling for it to be repealed. The Secretary published an advertisement stating the expectation to structurally reform and reorganise the Sri Lanka Press Council established by the Sri Lanka Press Council Law No 05 of 1973 covering electronic, print and new media as a tribunal for journalists and media institutions. The Free Media Movement, in the letter dated March 12, states that it has perennially objected to a unilateral media regulatory process by a government agency with detrimental legal provisions. The Free Media Movement agrees to “a regulatory” methodology encompassing all media that is developed through the engagement of the media community, protecting media diversity, independence, freedom and social responsibility. The Free Media Movement details the adverse legal provisions and the basis for opposing the Press Council in this article.

According to Section 16 of the Law, it is an offense to publish information on Cabinet proceedings in newspapers unless the Secretary to the Cabinet of Ministers has approved it for publication in the Newspapers. This provision is very outdated and violates the freedom of the press as well as the people’s right to information.

Section 9 (5) of the Law states that any order or censure of the Press Council shall be final and conclusive and shall not be questioned in any court of law. Accordingly, there is no authority or tribunal to appeal against such a decision of the Council. This is contrary to Article 4 (2) of the Convention on Civil and Political Rights No. 56 of 2007. In particular, when considering Article 12 (1) of the Law, which states that a violation of the order of the Council is construed as guilty of the offence of contempt against or disrespect of the authority of the Council is in no way in agreement with the rule of law.

Article 12 of the Law states that the Supreme Court has the power to hear cases of contempt of court and that the Supreme Court must accept the certificate submitted with the signature of the Chairman of the Press Council at such a hearing without further proof. It also states that Council members should not be summoned for the case without their consent in such an offence of contempt. Accordingly, journalists find it difficult to challenge the certification submitted by the Council to the Supreme Court. It also exacerbates the situation by not having the opportunity to file a civil or criminal case against the Council.

Section 10 (2) of the Law provides the power to prescribe a Code of Ethics as a function of the Commission. However, when it comes to establishing media ethics, the Council has the power to do so without any consultation with the media. It, therefore, appears to be a media regulation carried out from outside the media sector.

Section 15 of the Press Council Law of Sri Lanka defines a number of situations as criminal offences and carries a fine not exceeding five thousand rupees, or with imprisonment of either description for a term not exceeding two years or with both such fine and imprisonment. Introducing offences that result in the imprisonment of journalists by a regulatory Law is not appropriate. The most serious situation is that under Section 31 of the Law, a Magistrate Court should hear cases for offences through a summary trial. It is a great injustice to the journalists to be prosecuted based on a complaint lodged by a non-independent entity.

The Free Media Movement, which has stated in its letter that it will not comment on the practical issues about the Press Council, has urged the Secretary to the Ministry of Mass Media and Information to repeal the Press Council Law that contains the above detrimental legal provisions.