The end of war in Sri Lanka, captured for posterity by Google Earth 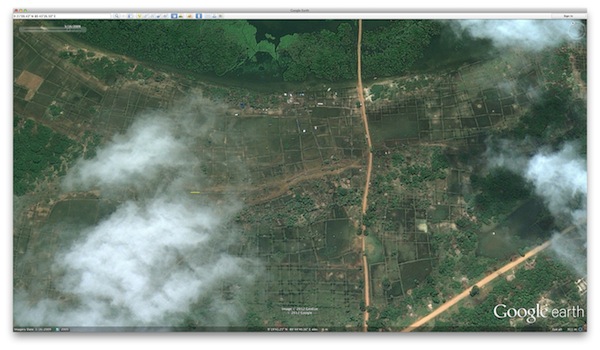 When in early 2009, UNOSAT released satellite imagery of what later turned out to be the final weeks of Sri Lanka’s 27-year old war with the LTTE, the images were met with vehement Government condemnation, and counter-analysis by the Ministry of Defence. During this heady, hellish time, the subject of The Cage: The Fight for Sri Lankan & The Last Days of the Tamil Tigers by former UN spokesman Gordon Weiss and the recently released Still Counting the Dead: Survivors of Sri Lanka’s Hidden War by the former BBC correspondent Frances Harrison, while the President assured Sri Lankans and the world that heavy weapons weren’t being used, the satellite images from UNOSAT added to the confusion, showing clear and widespread indications of heavy shelling.
The question then became when the shelling occurred. From the report by the UN Panel of Experts, appointed by the UN Secretary General to the Lessons Learnt and Reconciliation Commission’s Final Report, the trading of allegations and counter-allegations over the use of heavy weapons and the deliberate targeting of civilians continues apace. It is a heated, deadly serious debate.

When, for obvious reasons, during the UN HRC sessions in March this year, a web news report titled Is Google Earth Hiding Sri Lanka’s Ghosts? was published, the attention of Groundviews was directed towards the existence, on Google Maps and Google Earth (which largely share common geo-spatial tiles and database), of imagery focussing on the North East of Sri Lanka, taken from the first quarter of 2009. The original story was largely conspiratorial – alleging that Google was somehow, through careful blurring of ground truths in their geo-spatial database, aiding the Sri Lankan government escape war crimes charges. The real story was thus missed – the existence of this imagery, which no one in Sri Lanka including the government and no international human rights organisation we know of, have studied or flagged in detail.
This is a first and non-exhaustive crack at exploring this vast imagery. We sincerely hope it contributes to a larger, crowdsourced investigation into what this imagery can reveal about those final brutal weeks of war. Groundviews is guided by two key reports, both published by UNOSAT.

Usually, satellite imagery is inaccessible for crowdsourced analysis because of one key factor – money. A single tile (say a frame of 1km by 1km) can cost thousands of dollars to acquire, making satellite image acquisition theoretically a commercial possibility, but in fact, impossible for any Human Rights organisation in Sri Lanka to even imagine undertaking. At scale and over time, this is not something even the largest International Human Rights organisations can afford.

Google Maps / Google Earth offer, for our purposes, two advantages over the acquisition of commercial satellite imagery, the cost saving aside. One, the availability of good enough satellite imagery to work with. The other, historical imagery, from 2009, to compare and contrast specific geographical areas and any visible changes. There is historical imagery from as far back as 2005 and up to the end of 2011, but for the purposes of this study, imagery dated 3/16/2009, 5/24/2009, 6/15/2009 and 9/8/2009, which show the most amount of detail on shelling and the locations of the so-called Civilian Safety Zones (CSZ), have been used extensively. A final advantage of crowdsourcing this kind of work is that it is, in a sense, open data. Anyone, from anywhere, for free, can confirm or contest a sighting of something interesting, and flag other points of interest.

What Google Maps and Earth does NOT enable one to do, given (1) the quality of some of the historical imagery (which sometimes features extensive cloud cover of vast regions) and (2) the large gaps between the available historical imagery (mid March, late May, after the official end of the war and killing of the LTTE’s leader, then mid-June and early August) is any robust analysis on when shelling in a specific region took place, and importantly, by whom. Resolution matters, and allows for certain kinds of analysis and spotting. While it is possible, for example, to discern the effects of shelling, 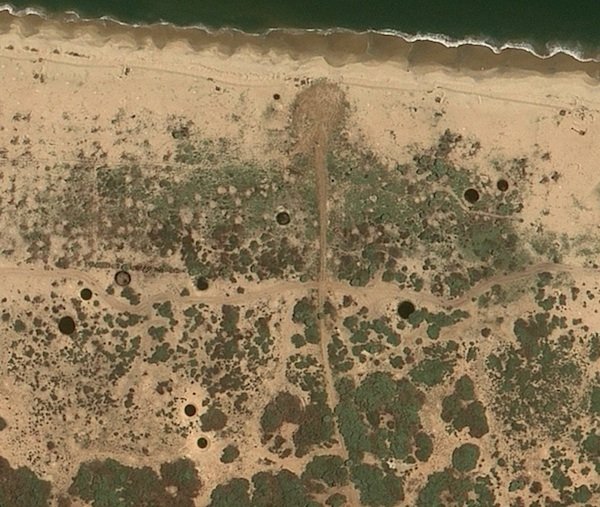 Click here for larger image.
at the same zoom level (the maximum possible without serious pixellation / image corruption), it is virtually impossible to discern with any accuracy what individuals or groups of IDPs were doing on the beachfront of CSZ on 3/16/2009. 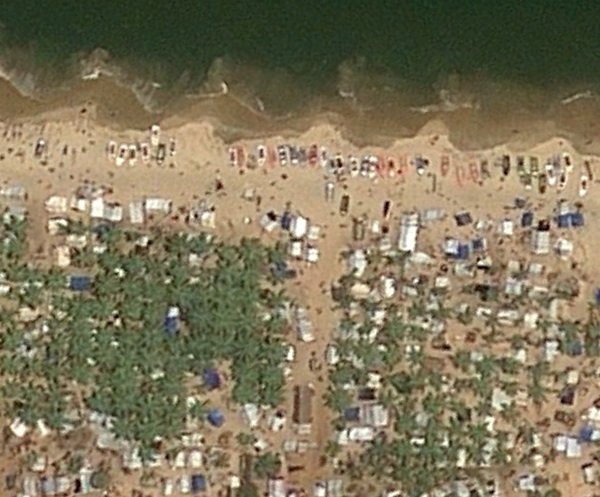 Click here for larger image.
Ultimately, what Google Maps / Earth have recorded, and quite clearly, is the sheer scale and extent of the destruction and human displacement in Sri Lanka during the final phase of the war, between March and May 2009. Plotted on a map, seeing this is fundamentally different to reading about the same information in a static report. In all the examples below, we have extrapolated from the UNOSAT report lat/long coordinates you can copy and paste into Google Earth to quickly zoom into an area, and then use the time slider to go back to available imagery from previous years around that area.

For general orientation, the sliver of land sandwiched by lagoon and sea highlighted in grey below, between Puttumattalan in the North and Mullaitivu in the South, is the area of study. 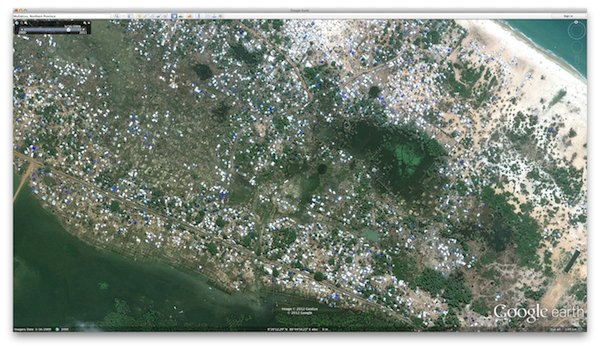 Click here for higher resolution image.
The same area, just days after the official end of war, is a barren wasteland. 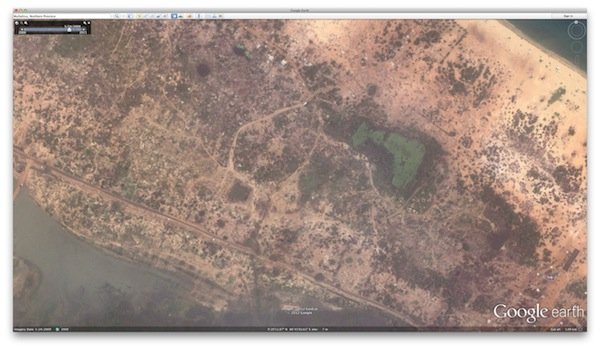 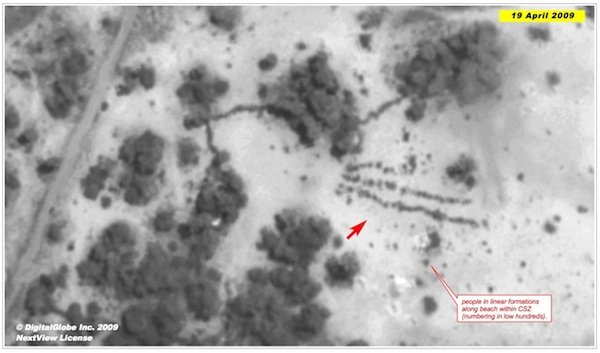 By 24th May, there is virtually no sigh of any human habitation in the same area, 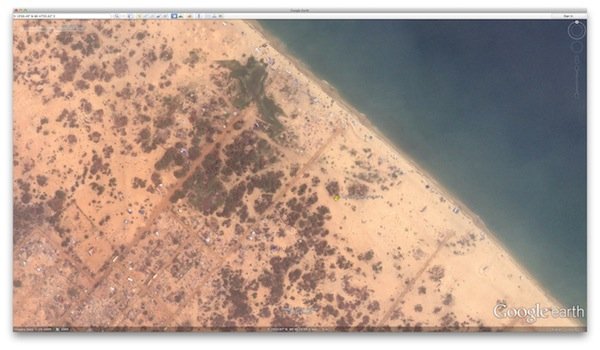 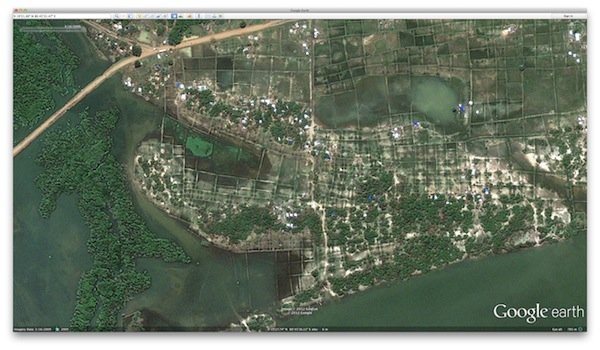 Click here for high resolution image.
Just over a month after, the UNOSAT report has this image of the area, 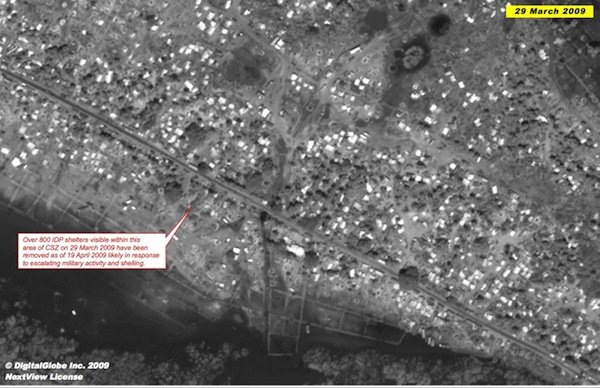 Click here for larger image.
Affirming the point made earlier about the unpredictability of Google Earth imagery is the data for this location from 5/24/2009. Clouds cover nearly the entire area, but shelling unseen in March is now visible in the lower left quadrant. 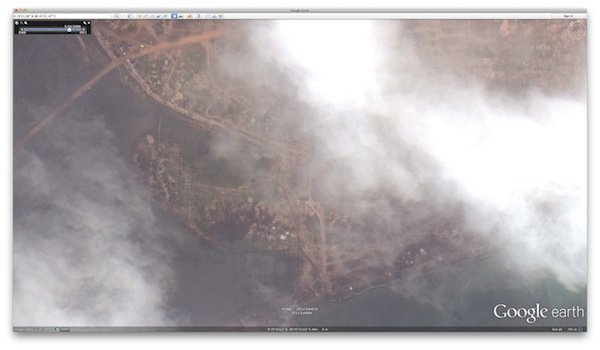 Click here for larger image.
Around a month after the war ended though, the this area looks unrecognisable even from as recently as March. There appear to be long, large bunds constructed and the entire area looks far less fecund. Evidence of shelling abounds. 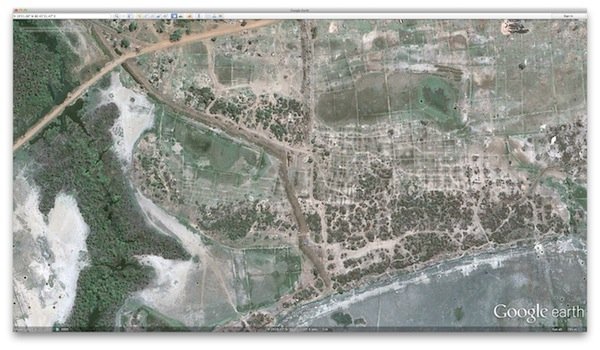 Click here for large image.
Possibly the most revealing example of the devastation of the environment (with obvious consequences to those inhabiting the area) comes from 9 21’51.06” N 80 43’17.65” E, which is flagged in the UNOSAT report for the destructions of buildings. In this image from mid-March, you see an area with a lot of tree cover. 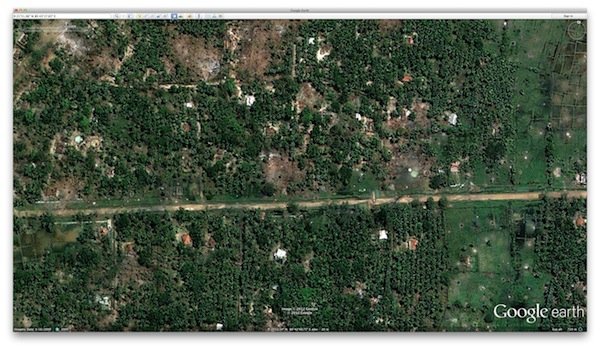 Click here for large image.
This is the same area, in June. 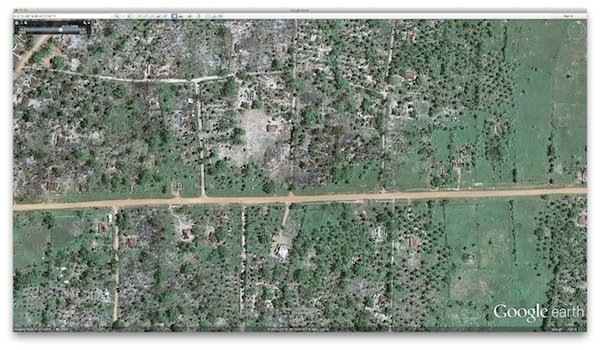 Click here for larger image.
Most likely on account of sustained MBRL fire, the devastation of the natural environment is stark, leave aside the damage to infrastructure, and whatever happened in those months to those resident in this area.
9 21’09.43” N 80 43’26.50” E in the UNOSAT report looks at how access to the CSZ, by April 2009, was basically completely cut off. Reports earlier that year had put the number around 350,000. This number is itself contested, but there is no doubt when looking at the satellite imagery that tens, if not hundreds of thousands of children, women and men were completely cut off, with UNOSAT noting that the bridge connecting the land they were in to the mainland demolished by a trench barrier. The evolution of this siege in captured in the imagery.
In March 2009, even with the cloud cover, you can see the area around the CSZ wasn’t heaving fortified. There is a little evidence of shelling, and some scattered settlements. Mark, in the larger image, the placement of the yellow line – it is important. 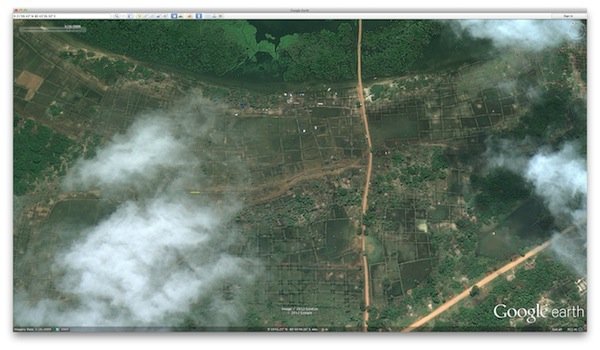 Click here for larger image.
The same area, zoomed out, in late May, looks remarkably different. The yellow line in the image measures around 17m, which is the width of what appears to be a mound or trench that bifurcates the land area. The same yellow line is superimposed in the image above. Comparing the two images, you can see that in March, there was no military construction at all in this area. 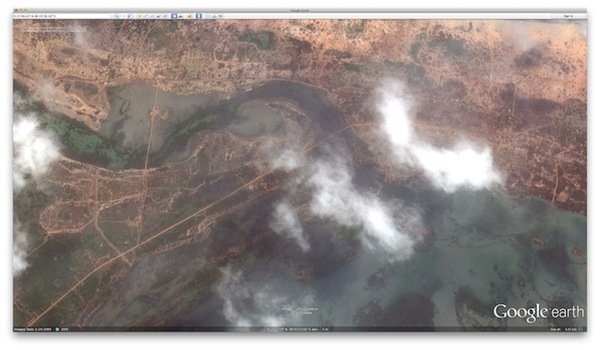 Click here for larger image.
What the images above don’t give a sense of is the displaced population this military firewall of sorts contained. This is clear in the following image, which really has to be seen live on Google Earth. Basically, every single white dot in the area just East of the military infrastructure is an IDP shelter. A shelter for an entire family, often more. Even as early as March 2009, the IDP density in this area is mind-boggling. 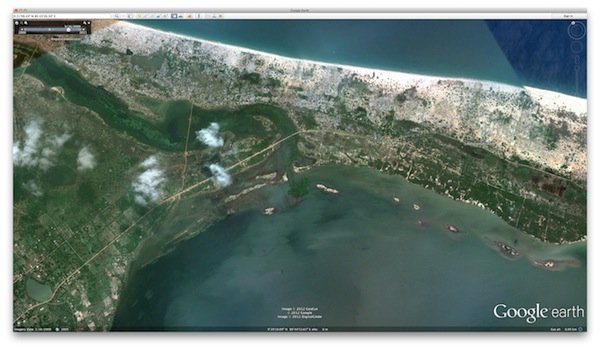 Click here for larger image.
9 19’59.05” N 80 44’10.68” E is flagged in the UNOSAT report as an area that experience intense shelling, and also features IDP family-dug trenches and shelter footprints left after relocation. The clearest imagery from Google Earth showing the devastation in this area comes from 6/15/2009. 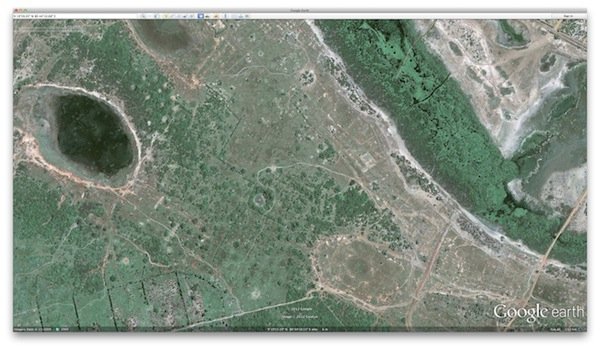 Click here for larger image.
The same area when seen in March is much less scarred, and far more green. Using an image difference analysis programme called Kaleidoscope for the Mac, we created the following video (best watched full-screen in HD) to highlight the devastation, including the telltale signs of shelling.
Image Diff Analysis – GV story from Centre for Policy Alternatives on Vimeo.
Using Kaleidoscope again, the final example juxtaposes the CSZ’s human habitation / IDP concentration between March and late May 2009. The stark difference requires no explanation (and like previous video, best watched in full-screen and HD).
CSZ – Between March and May 2009 from Centre for Policy Alternatives on Vimeo.
The two images that fed into this video can be downloaded in high resolution from here (March ’09) and here (May ’09).
We’ve embedded below Google Earth imagery from March 2009, showing Nandikadal. You can download the KMZ file here, but it’s a cinch to select the back-dated imagery in the programme, and explore on your own. A large screen, good broadband and high resolution help immensely, but the programme works fine on any recent laptop. As flagged in UNOSAT’s Satellite Atlas: Civilian Safety Zone (CSZ) Mulattivu District, Sri Lanka, released 23 March 2009, the Google Earth KMZ below matches the geographical area included in the report.

Please explore, use a programme like Kaleidoscope to analyse an area over time and report back what you see, feel and find.
Nandikadal – 16 March 2009