The end of a brand: On the fall of the Rajapaksas 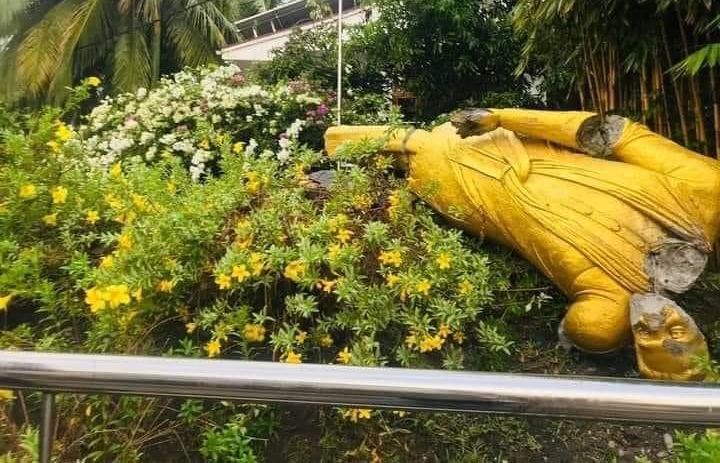 The fall of the Rajapaksas in public esteem underscores limits of muscular nationalism
The resignation of Sri Lankan Prime Minister Mahinda Rajapaksa, amidst extraordinary scenes of violence as part of the widespread public uprising against his family’s rule, marks the abrupt fall of a political brand that has been dominating the country for the better part of the last decade-and-a-half. Venerated by large sections of the majority Sinhalese as a national hero who defeated the Liberation Tigers, Mr. Mahinda could never have imagined that his teeming support base would be replaced by swarming protesters so vehemently opposed to him that he would have to leave ‘Temple Trees’, his Colombo residence, for safety. Thousands of protesters have been demanding the resignation of all the Rajapaksas occupying various posts, including President Gotabaya Rajapaksa, as the economic crisis became unbearable with a huge shortage of food and fuel, as well as the means to buy them. Until a few days ago, the Rajapaksas appeared heedless of the demand, as the country sought to overcome the crisis through overseas aid and bailout packages. However, as the protests spiralled, it appeared that the President wanted his elder brother to resign as Prime Minister. Amidst the political uncertainty, a violent attack on the protesters in Colombo, allegedly by supporters of the Prime Minister, set off a series of incidents that resulted in deaths and injuries, even as houses of political leaders, including the ancestral home of the Rajapaksas in Hambantota, were targeted by arsonists.

Mr. Mahinda’s resignation may not be enough to assuage the protesters and the political instability may continue. Anyone taking up the post of Prime Minister now will have to command public trust as well as have the will to steer the country towards economic recovery. President Gotabaya will have to choose someone who can command a parliamentary majority, but the current mood of public anger may deter anyone who has been associated with the Rajapaksa regime. The Opposition leader, Sajith Premadasa, has already declined an offer to head a government under a Gotabaya Presidency. For India, which has responded to the crisis with financial and material aid worth $3.50 billion, the situation presents a unique dilemma: its continued support should not be seen as a means of keeping an unpopular regime going; nor can it look the other way as shortages persist, causing misery for the common folk. In its reaction to the situation, India has said it supports Sri Lanka’s democracy, stability and economic recovery and that it “will always be guided by the best interests of the people of Sri Lanka expressed through democratic processes”. This can only mean that it does not want to be seen as extending political support to the present regime, but prioritises the people’s interests. A larger message from the demise of the Rajapaksa brand is that muscular nationalism and majoritarian mobilisation may not be an endless reservoir of support, and will be of no avail when the masses face economic hardship.