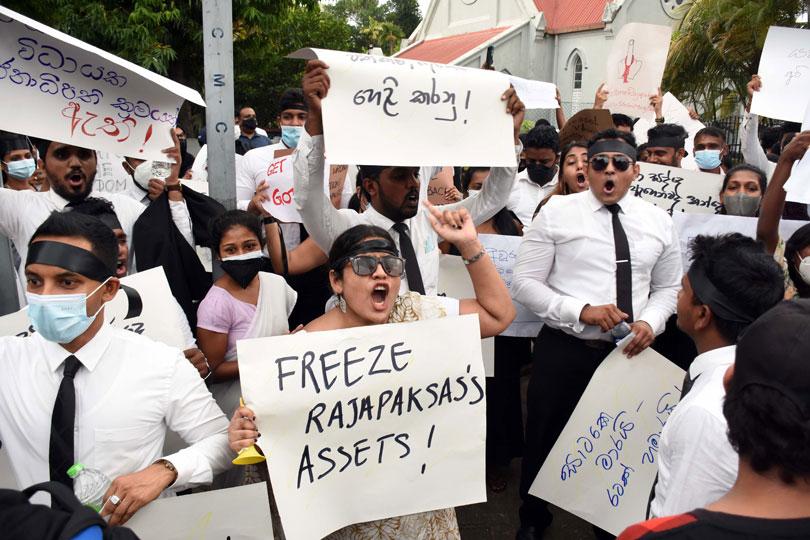 The economic challenges in the next few days are not going to get any easier for Sri Lanka in the run up to the New Year. One would have to be stupid or a fool, or both, to expect an optimistically tangible result to the current political impasse. The fault lines in the administration of the country have been evident for some time.

The President’s office, according to analysts, became a virtual mafia, run by a well known bureaucrat and his proxies. He has now left, leaving a trail of chaos behind him. Thanks to the colossal greed, mismanagement, and corruption of a handful of people who have links to those in high places, standards have plummeted to such an extent that Sri Lanka has become the laughing stock of the world. Once a country known for its high literacy and strong institutions, Sri Lanka is now dying a slow death. This has to be stopped.

The crisis took a turn for the worse when the Central Bank of Sri Lanka (CBSL) decided to float the rupee after defending it for over 12 months at a peg of Rs. 203 to the US dollar (USD). The floating turned out to be disastrous. Today the black market rate for a USD is Rs. 400-plus. Sri Lanka has lost half its wealth in just one day. Companies that imported goods on three to six credit lines are now looking at the bottom of the barrel.

So what went wrong? The way the rupee was devalued was unprecedented. Even the International Monetary Fund (IMF) had advised Sri Lanka to do it gradually. Of note is that parliament sanction should have been obtained prior to devaluing the rupee by 50% overnight.

It will never be forgiven or forgotten if a few people had advance information of the impending devaluation and made money out of a bad situation. This is a country’s future we are talking about. It is indeed time to hold those people both in the private sector and public sector accountable for these excesses.

The agitation on the street is for Prime Minister Mahinda Rajapaksa and President Gotabaya Rajapaksa to step down and pave the way for an all-party Interim Government. If the President resigns due to public pressure, to ensure political stability in the country, Parliament will immediately have to appoint an acting president.

Thousands of Sri Lankans are fed up with the trajectory of the country and an out of control economy in a death spiral, and as a result, many Sri Lankans called for the entire Rajapaksa family and their kith and kin to vacate politics and leave Sri Lanka. A caretaker government with the 11 parties cannot do much to revive the economy.

Whoever plans to run the economy must have the ability to put food on the table and oil in the lamp. The power cuts must go away and medicines must be made available. Three billion USD is needed to tide over this period. Looking at the line up in the Government, it is very unlikely anyone has the bandwidth and capacity to deliver.

Therefore, we need a Government with all the political parties in the short term to get Sri Lanka out of the woods and ease the pain of the public. What the Government is putting the people through is not fair by any measure of governance – except for a Stalinist, or someone judging by what Kim Jong-un is dishing out now, with no pretense of empathy or even responsibility for even those who voted them into power. The Rajapaksas must do what is good for the country.