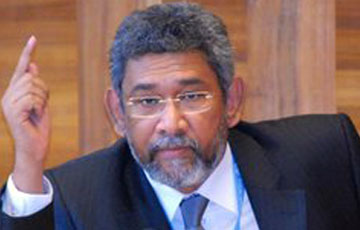 ‘What we are witnessing is nothing less than the emergence of an ethno-religious fascist movement from the dark underside of Sinhala society’ says Dr. Dayan Jayatilka,  political scientist, referring to reports of the recent manifestation in Maharagama.
‘Just as fanatical ethnic or ethno religious movements came to the fore globally with the dawn of a uni-polar world following the collapse of the USSR and the larger socialist alternative, the Sri Lankan counterpart arises with the post-war uni-polarity of our political system and the vacuum left by the slow motion implosive collapse of the democratic opposition’  according to Dr.  Jayathilaka.

Looked at more closely, the concrete context of the emergence of this movement is constituted by the confluence of five factors he says.

1. Benign tolerance, if not early patronage, on the part of the regime. A precursor of this phenomenon was the anti-Muslim propaganda conducted by a party which is a constituent of the government and which concurs with the current calls of the new militant movement. The fast risen high rise in a prime location in Colombo, which houses the extremist movement, also indicates access to patronage.

2.   The absence of an inclusionary, pluralist statesmanlike stance and discourse on the part of the nation’s political leadership, and a refusal to adopt such a stance. Instead a dominant ‘regime discourse’ of majoritarian militarism, which legitimises more militant spin-offs, spouting hate speech and blackmailing regime and state.

4. The absence of a moderate nationalist and socially progressive, i.e. social democratic Opposition. The opposition is in the throes of a protracted ‘organic crisis’, defined by Antonio Gramsci as one in which the traditional social support base of a party deserts it.

5. The weakening of the Left, by which I mean the JVP, by a three way split, one to the populist right, led by Wimal Weerawansa and the other to the radical left, the FSP/JAV and the sectarian inability of the JVP and FSP to form a united front or action bloc even if their future survival depends upon it (which it does).

Dr. Jayathilaka points out that ‘The frog-in-the-well ‘strategic minds’ embedded within the Sinhala racist surge or manipulating it as a proxy, may think that an anti-Muslim stance will endear the Sinhalese, the state or the country to the West. These gentlemen and ladies do not seem to know that the West supported jihadis in Afghanistan against the USSR, and still do so in Libya and Syria—even against their own interests- when they are fighting against a state or regime that the West is inimical towards. The Sinhala racists also do not know that the West bombed Christian Serbs facilitating the birth of two Islamic majority states, Bosnia and Kosovo, destroying Yugoslavia (which had begun to self-destruct anyway). In trying to dominate multiethnic, multi-religious Yugoslavia, the Serbs lost the non-Serbian parts of their country (including Kosovo in which they had sacred spaces) and were contained in the part where they did have a historic majority’.

‘No military victory, even one as definitive as that of May 2009, can be durable if the tectonic plates of society start moving apart from each other, and move apart they will, if they are pushed away or excessive pressure is brought to bear upon any of them. Sri Lanka will not be the Israel of South Asia. The drive for Sinhala Buddhist domination over all its minorities will make it the Serbia of South Asia. If this multiethnic, multi-religious, multilingual country is forcefully and unilaterally redefined as Sinhala-Buddhist and nothing else, it will be an ironically self-fulfilling prophecy: the country will shrink, or be shrunk by the world, to its Sinhala Buddhist core/heartland and nothing beyond. The country will crack up and be diminished, he says.
SLM