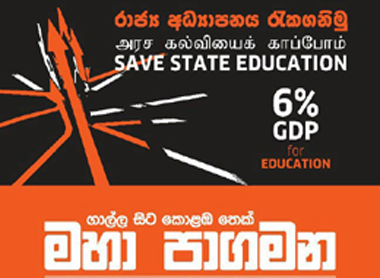 Laksiri Fernando
This refers to The Island editorial yesterday (26 September 2012) on basically the same title without the question: Who? It may be in order to caution the FUTA (the Federation of University Teachers’ Associations) of any possible deviation or adventure, given the subtle machinations that the government and more particularly the Minister in charge are hatching with the hope of crushing the legitimate demands of the academics which are the concerns of the general public at large on education and higher education.

But it is entirely a different thing to blame FUTA, directly or indirectly, for unduly politicising the issues as the government has been all out to denigrate the academics as political pawns of local and foreign conspiracies from the beginning. The demand to increase public expenditure on education (both school and university) targeting 6 per cent of the GDP is not a political demand but a social one.

The other main demands, apart from a salary increase, are to stop political interference in universities (i.e. academic freedom and autonomy) and to consult academics on university reforms (i.e. academic responsibilities and participation). It would only be a political lunatic or a schemer who could characterise these demands as political.

Of course there have been on and off political overtones or expressions by individual academics or even by spokesmen of FUTA. Those were inevitable given the intransigence of the government. The dispute started not this year but last year. The history of trade union struggles show, particularly in the public sector, that they are naturally intermingled with political realities and forces. After all, their employer or the adversary is the Government. Those who aspire for pure trade union struggles are pathetic dreamers.

It is entirely correct for the FUTA to take the struggle to the streets and seek broadest possible support from the students, religious and civil society leaders and political parties in the opposition and also in the governing coalition, the UPFA. Even the international support is soon warranted. The issues are too important to leave them to be a mere ‘labour dispute.’ The past of the organizations such as the Inter University Student Union is not very relevant to the present context as far as they have clearly expressed that they abide by the democratic norms.

As the editorial has acknowledged, “Determined to win its demands, the FUTA is all out to crank up pressure on the government and its resilience is to be admired.”

This is the third month that the academics are not paid their salaries, a most inhuman measure that is carried out without any appropriate effort to negotiate and amicably resolve the issues at stake. I personally know the intellectual or rather the anti-intellectual calibre of the present Minister being a university teacher during his student days, and he appears to act as if to take revenge from those who have excelled in education and academic pursuits.

There is no need to hide the need for ‘regime change’ in Sri Lanka in connection with the FUTA struggle or outside. While The Island editorial has shied away from the issue or insinuates that talk about regime change can be counterproductive for the FUTA struggle (as sympathetic advice perhaps) the lead story on the same day and many editorials and news reports before confirm that there is no other way for the people of this country rather than changing the regime and changing many regimes (to mean the systems) within the constitutional, policy and institutional framework of the country.

‘Regime change’ in higher education is the central issue at present starting from the Minister down to the Vice Chancellors who are mere political appointees at present. I would request the FUTA to ask for the resignation or the removal of the Minister to begin with. This is not an ‘Arab Spring.’ It is a legitimate demand. He has failed as the Minister and failed terribly in addition to corruption and nepotism. No confidence motion in Parliament is in order.

There are those who have genuinely raised the issue that mere increase of expenditure is not sufficient. Yes. FUTA demands include educational reforms with full academic participation and that is the right thing to do. It also demands a halt to political interference and that is also a regime change to mean the change of systems. At this very moment the academics are marching towards Colombo and they should win their struggle.

If the government is serious about it’s declared ‘Chinthana’ or ‘Hubs,’ then it should allocate at least 2.5 per cent of the GDP for education in this forthcoming budget. This is the time of budget preparation. The necessary allocations can come by pruning the present exorbitant and unnecessary expenditure on External Affairs and Defence. That kind of gesture with other promises can settle the present dispute so painful for every one and particularly for the students and their parents.

The editorial has raised the ‘scarecrow’ that the government is strong. Yes, the government may be strong but not on this issue. No doubt that a total regime change is a long way ahead through democratic and peaceful means. But FUTA should win. Let me quote finally what the Universal Declaration of Human Rights declared in its Preamble.

“Whereas it is essential, if man is not to be compelled to have recourse, as a last resort, to rebellion against tyranny and oppression, that human rights should be protected by the rule of law.”
( Who “Ruins the Chances of Reconciliation?” ) – Courtesy: The Island