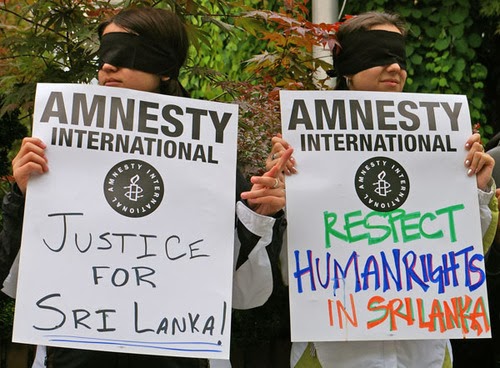 World believes Govt. impunity cannot, will not protect SL’s human rights: UNP
The United National Party (UNP) has declared that the paralysis on the part of the Government to end impunity has caused the international community to lose faith in the Rajapaksa regime’s ability and willingness to protect the rights of the Sri Lankan people. “International action being called for today, is a consequence of the Rajapaksa Government’s paralysis on addressing grave crimes committed in this country,” the UNP said in a statement.
“This crisis Sri Lanka faces internationally is not, as the Government would prefer the people believe, an international conspiracy or petty jealousy against the Sri Lankan state for defeating terrorism,” the UNP pointed out.
The statement said the UNP had repeatedly appealed to the Government to address the allegations raised in the international arena with the seriousness they deserve, but in an attempt to protect the interests of the ruling family and their coterie of followers, the regime has determinedly decided to ignore such advice.
“By doing this, the Rajapaksa regime has risked our nation being cast as a pariah in the community of civilized nations. Though the Rajapaksa regime is attempting to rile up tribal sentiment among the majority community, with its chest beating defiance of the international community, in reality, what they are doing is hiding behind the false pretense of nationalism, to protect their own political and commercial interests,” the statement said.
The UNP said it has repeatedly called for a change in the discourse on human rights. “We continue to educate the public on why protection of human rights by our Government is in the best interest of all of us. Irrespective of the regime’s portrayal of international conspiracies, it was President Mahinda Rajapaksa himself who promised the Secretary General of the United Nations in May 2009, that he would address “the aspirations and grievances of all communities and work towards a lasting political solution” and pledged “to proceed with the implementation of the 13th Amendment, as well as to begin a broader dialogue with all parties, including the Tamil parties in the new circumstances, to further enhance this process and to bring about lasting peace and development in Sri Lanka.” Having misled and continuously lied to the Sri Lankan people and our friends abroad, the regime is now claiming they are being hounded,” the statement said.
The UNP had called on the Government to desist from taking petty political mileage out of the Geneva human rights crisis, but it is abundantly clear that the Rajapaksa administration is only interested in furthering its own narrow political agendas, even at a colossal cost to the country. “The regime is clearly trying to turn the Geneva crisis into a political rallying call, by portraying it as a conspiracy against Sri Lanka. The Rajapaksas believe they can appeal to the primordial racist sentiments of certain people by this kind of juvenile handling of the country’s foreign policy crisis. We believe that the Sri Lankan people are not so gullible as to fall for such gimmicks any longer,” the statement said.

“The UNP has repeatedly warned that the inaction by the Rajapaksa regime to address the alleged violations of human rights and the blatant anti democratic policies such as the illegal impeachment of the Chief Justice, the repeal of the 17th Amendment, introduction of the draconian 18th Amendment, militarization of every aspect of our social, political and economic lives, and the overall breakdown of law and order, have all contributed to the current crisis. Five years later, the Government is yet to bring to book the killers of Sunday Leader Editor Lasantha Wickrematunge. It refuses to reveal the whereabouts of cartoonist Prageeth Ekneligoda,” the statement said.

“The inaction and lack of will makes it clear that the Government is implicated in each of these heinous crimes, for what else prevents a democratic Government, which claims to be committed to protecting the security and rights of the people, from investigating the brutal murders of its citizens?” the UNP said.
The UNP pointed out that it is poignant to note at this point, that in the ongoing discussions in Geneva, there are not only concerns raised on the alleged violations in the North, but also in the South.
“We once again call on the people of our country not to be misled by the propaganda of the regime, and to seek rational reasons as to why international allies who once supported us to defeat the LTTE, are now acting against the ruling administration.” “They do not know how to handle the crisis in Geneva, nor the numerous crises at home, whether it is securing our children from the drug menace, providing equal economic opportunities, protection of basic human rights of citizens, or fostering ethnic and religious harmony in order to prevent another war,” the UNP said
Sunday Times
Share
Facebook
Twitter
WhatsApp
Pinterest
Email