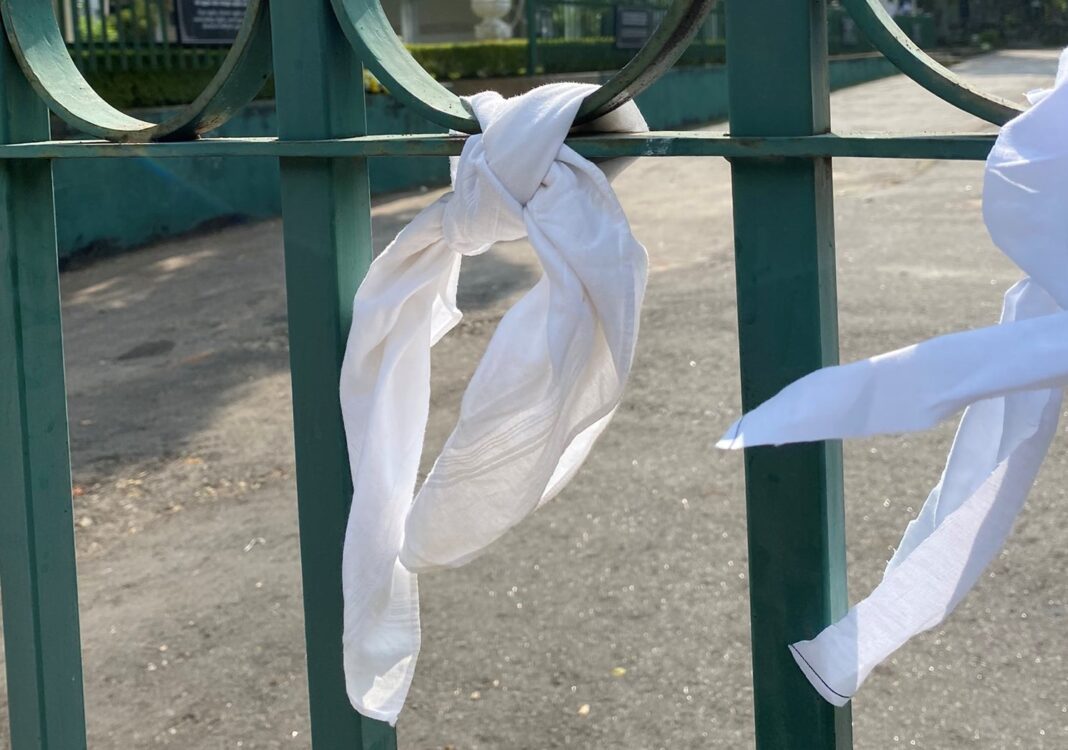 Image: As a protest to the forcible cremation of baby Shaykh, the 20-day old infant white cloths were hanged at the Colombo cemetery by rights activists. (Photo @alizmoulana)

Given deeply worrying abuse of power historically by the Sri Lankan State under states of emergency with national security as justification, the covid-19 global pandemic must not be employed, much like conflict in the North and the South was utilised, as a cover to trample on civil liberties.

kishali
A rare and brave intervention

When a so-called medicinal man (less politely referred to by some as a witch doctor) touts a syrup to ‘cure’ covid 19 for which large numbers of desperate human beings queue, sans social distancing outside his house in Kegalle, he escapes unscathed despite bringing about a clear violation of quarantine regulations. Not only that, this worthy is later entertained in Parliament with the Speaker and sundry Ministers sipping this ‘miracle’ tonic. What then, is the point of forbidding large gatherings or arresting people walking on the streets on the basis that they are not wearing masks?

Rights of the Tamil parents

And why is that same latitude afforded to shifty-eyed witch doctors with political patrons not given to Tamil parents protesting the disappearances of their children in the Wanni, who are told that they will be quarantined if they do not stop their protest? Or more empathy shown to the parents of a covid-19 infected (Muslim) baby, who had endure the child being cremated contrary to their religious beliefs as well as being accused of negligence by the authorities? For Muslims to protest against such treatment, their Ministers, MPs and community leaders must speak up, must resign from Government, not parrot commands from above while safeguarding positions of power and privilege.

A question of humanity

Above all, this is not ‘a Muslim issue’, as much as the killing of  six million Jews by the deranged vegetarian poet-artist turned demagogue Adolf Hitler was not a ‘Jewish’ issue. Put bluntly, it is a question of humanity. From dead prisoners in the Mahara prison ‘riots’ who were shot, as one account goes, while they were asking for water, to other profoundly inhumane inequalities in the application of the law by Sri Lanka’s Government, cries of victims are becoming shrill and demanding in our ears. These are matters on which the leaders of all religious traditions must speak out. It is therefore good to see the Anglican Church of Ceylon engaging in a rare and brave intervention on International Human Rights Day this Tuesday.

The Church called upon the Government to remember that, ‘respect for human rights must be central to the pandemic recovery effort.’ Two specific cases occasioned this concern. First, the case of attorney Hejaaz Hizbullah imprisoned on suspicion of aiding and abetting terrorism and who moreover, has not had access to his legal counsel for several months. Second, the case of Shani Abeysekera, former head (Sinhalese) of the Criminal Investigation Department (CID) imprisoned with the advent of this Government and who has contracted covid-19, suffering also a heart attack. The Church cautioned that these two examples ‘demonstrate that there are serious human rights concerns in the country’ and requested the Government to ‘address these concerns as a matter of urgency.’

This was a welcome change to exceedingly anodyne messages put out by various arms of the United Nations agencies on each International Day of this, that and the other as if the airy circulation of determinedly bright soundbites discharges its enormous burden to live up to its founding ideals. For example, this International Human Rights Day, we were asked by one Colombo based agency to remember that human rights is at ‘the front and centre’ of their responses,’ whatever that may mean. If after decades of the UN being set up, the ‘front and centre’ part of that interventionist process has to be emphasized, surely it is better not to have such agencies in the first place.

Role of the opposition

But to return to my core point, this sound advice by the Church of Ceylon, to act ‘honestly and in a spirit of self-criticism’ applies not only to the Government but also to the Opposition. The fledgling Samagi Jana Balavegaya (SJB), the Janatha Vimukthi Peramuna (JVP) and the Tamil National Alliance (TNA) must understand that roaring in Parliament will not provide a viable counter to this Government. In particular focus are their concerns regarding various members appointed through Presidential fiat to several so-called constitutional commissions. Fears that these commissions may be stripped of even the figment of independence may be legitimate. But the objection that the 20th Amendment is solely responsible for the tenure of existing commission members being brought to an end is entirely incorrect in terms of the law.

Flaws of the 19th Amendment

Indeed, the moralizing of Opposition politicians who should know better on this matter, has become intolerable. One pontificating parliamentarian had the temerity to say that if members of the constitutional commissions were replaced before their tenure lapsed, a motion should have been moved in Parliament for permission to appoint new members. These parliamentarians must be reminded to look anew at the 19th Amendment which they ushered in as ‘re-establishing’ democracy’ in 2015. Article 49 (2) (the transitional provisions) established an unhealthy precedent for immediate cessation of terms of existing members of constitutional commissions, appointed by the Rajapaksa (the First) Presidency.

Warnings issued at the time, including in these column spaces, fell on deaf ears. Bad precedents were put in place for worse rulers to emulate. This is the result of a calamitous combination of lack of institutional memory and overweening arrogance. And let us not forget other ‘inconvenient’ precedents as well, including the then leadership of the Bar Association of Sri Lanka urging (former) President Maithripala Sirisena to send a sitting Chief Justice home by a letter on the basis that he had ‘never sat in office.’ We may count ourselves lucky that this Government had not adopted that atrocious precedent as well when it swept into power this year.

From a pro-UNP Bar (then), we have a pro-Rajapasksa Bar (now), which seems to be deaf, dumb and blind, even though injustice is caused to a member of its own tribe. This week, thunder predominated in Parliament over the independence of the judiciary as the Justice Minister extraordinarily ‘justified’ his Ministry moving to the plush World Trade Centre at enormous financial cost, as a ‘sacrifice.’ This emulated the Minister of Health who offered herself to the seas as a ‘sacrifice’ if it would end covid-19, later dropping pots into the Kelani River to propitiate the gods despite teachings of the Buddha which scorned mindless behaviour. These rude antics notwithstanding and despite Parliaments and Ministers that/who may come and go or judgments and judges that/who may come and go, the injustice of an act becomes embedded in the nation’s collective memory.

This was true of the imprisoning of Sarath Fonseka, whatever one may say about the man and of the imprisoning of journalist JS Tissainayagam. One day, this will also prove to be true of current injustices, including the imprisoning of critics and criminal investigators made to pay the price for too zealous performance of duties. That may be cold comfort for Hejaaz Hizbullah and Shani Abeysekera as they languish in their comfortless confines in a ‘season of misery,’ where a country in the inexorable grip of covid-19 spread and relentlessly cruel leadership has little to celebrate.

Even so, it is a lesson that those in power may take heed of, if only they have a modicum of wisdom.