The Confidence in Democratic Governance Index: Majority Sri Lankans (70%) do not want a military government 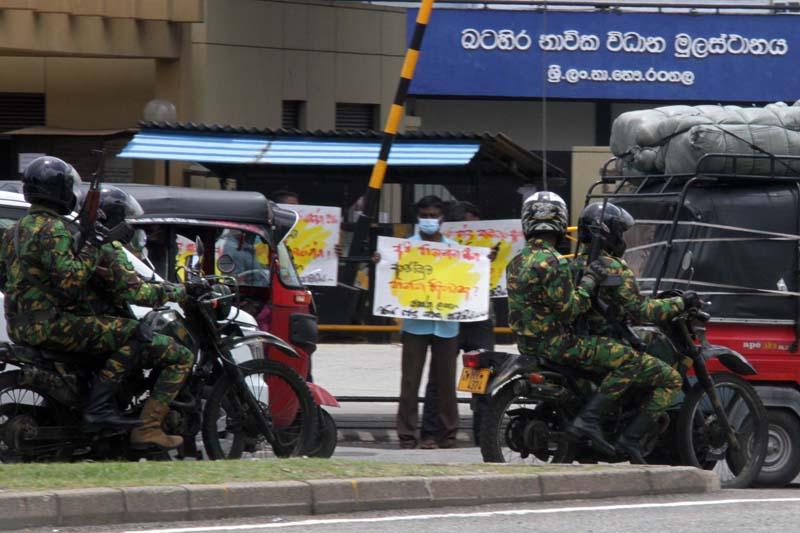 “There appears to be overwhelming support towards the Military as a result of their efforts
extended in mitigating the COVID-19 crisis in the country. However, when asked as to
whether the country should be governed by the Military, a substantial majority (70.8%)
expressed disagreement.” – Confidence in Democratic Governance Index

The Confidence in Democratic Governance Index was conducted in light of assessing the system of governance under the Gotabaya Rajapaksa regime that was elected to power in November 2019.

Although the current regime promised vistas of prosperity and splendour, the soaring cost of living, food shortages and the crippling economy has left the citizenry in disarray. The mismanagement and imprudent social, economic and political policies executed amidst a public health crisis, has resulted in a system of governance that has created a near humanitarian catastrophe.

Multiple presidential task forces headed by military personnel (or those with a military
mindset) that bypass existing channels of democratic processes, coupled with an emphasis
on Sinhala majoritarian supremacy, has been a few of the key highlights in the current regime.

In this context, the national survey aimed to gather public perception pertaining to the
government’s performance and pledges, preferred forms of governance, the role of the
military, an assessment on social conditions, the legitimacy of COVID-19 regulations and fair treatment during the pandemic.

The research study was conducted by Social Indicator (SI) the survey research arm of the
Centre for Policy Alternatives.

On the Government’s Performance

• Overall the top three factors that respondents believe the government should focus on is
mitigating the spread of COVID-19 (30.3%),control the rise in cost of living (26.1%) and
ensure economic growth (25.9%).
• A significant proportion of respondents (67.2%) are dissatisfied with the Cabinet of Ministers’ efficiency in mitigating the COVID-19 crisis – The respondents seem to be mostly satisfied with the efficiency of the Public Health Inspectors in their respective localities.
• A majority of respondents (72.1%) are of the opinion that even though chemical fertilisers are not good for one’s health, until a viable solution is found, chemical fertilisers should continue to be used to some extent – 23% of the respondents are of the view that chemical fertilisers must be completely stopped immediately, as it is detrimental to health.
• Nearly 45% of the respondents claim that the government should allow foreign companies to invest in the country, as an increase in trade benefits everyone – 37.5% indicate that due to exploitation by foreign companies, the government should not allow foreign investment in the country.
• When compared to what it was during the previous government in power, the
respondents claim that there appears to be a decrease in levels of impartiality when
enforcing law and order, freedom to criticise the president, political leaders and the military
or other civil defence forces. The respondents also claim that there is a decline in the general quality of life.# 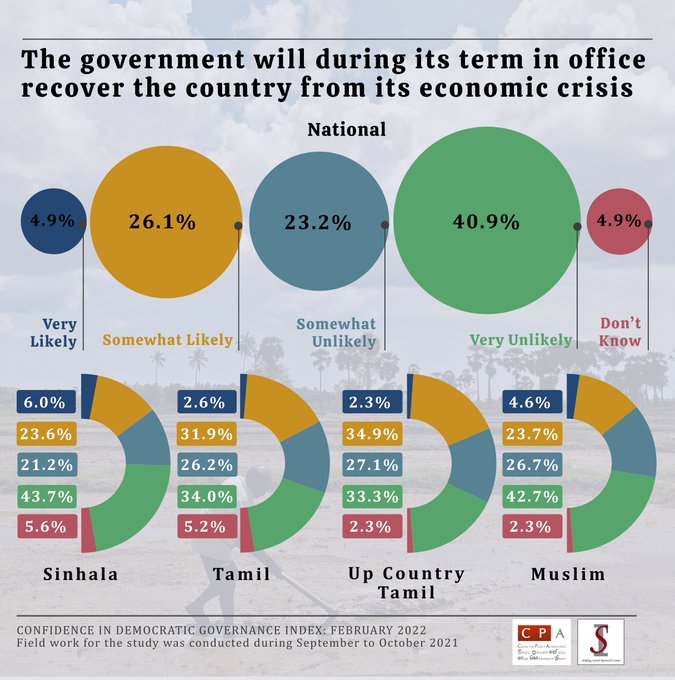 On the Government’s Pledges

• A majority of respondents (64.1%) claim that it is unlikely that during its term in office, the government will recover the country from its current economic crisis.
• Thinking about national security under the current system of governance – a majority of
respondents (60.4%) are of the opinion that the country will most likely be secure from
internal security threats whilst around 30% oppose this.
• There appears to be a certain degree of scepticism in relation to the government’s plans for a new constitution. Whilst nearly  introduce a new constitution during its term in office, nearly 40% are of the view that it is unlikely it will do so.

On Forms of Governance

• There appears to be significant support towards having a strong leader who is not
inconvenienced by elections.
• When analysing public perception on decision making, it is evident that an overwhelming
majority (87.4%) agree that all major decisions pertaining to the country should be taken by experts as opposed to politicians.
• On decision making by religious leaders, a majority of respondents (76.3%) disagree
that all major decisions should be taken by religious leaders.
• An overwhelming majority (92.2%) are in support for an elective principle.
• Exactly half of the respondents (50.3%) are of the opinion that more powers should be given to the Parliament by reducing the powers of the President.
• Nationally, a majority of respondents (60.7%) are of the view that there should be more experts as opposed to politicians in government, even though experts may not be
proficient in politics.

On the Role of the Military

• There appears to be overwhelming support towards the Military as a result of their efforts
extended in mitigating the COVID-19 crisis in the country. However, when asked as to
whether the country should be governed by the Military, a substantial majority (70.8%)
expressed disagreement.
• There is considerable support in the Military handling public affairs at a time of crisis,
rather than having to follow bureaucratic procedures. This view is particulalry most
favourable among respondnets from the Sinhala community (60.5%), as opposed to
those from the ethnic minority communities (Tamil 30.5%, Up Country Tamil 30.2% and
Mulsim 25.2%).
• Nationally, a majority of respondents (84.1%) indicate that they are satisfied; while a mere 17.4% indicate that they are dissatisfied with the role of the security forces expanding to perform civilian duties.

On the Legitimacy of COVID-19 Regulations

• A majority of respondents (75.1%) indicate that the government imposed regulations
were useful to control the spread of COVID-19.

• A majority of respondents (nearly 55%) indicate that regulations imposed by the
government to mitigate the COVID-19 crisis were not fairly implemented across all citizens
in the country.
• It is clear that it is mostly respondents from the ethnic minority communities who claim to have experienced a higher level of discrimination or unfair treatment when COVID-19 regulations were implemented by the Police, Military and health authorities, when obtaining services from local level government officers and when receiving government subsidies, as opposed to those from the majority Sinhala community.
• Comparatively, a significant majority of respondents (58.8%) from the Up Country Tamil community indicate that their political party affiliations resulted in them being unfairly treated when receiving government subsidies