The ‘Census on human and property damages due to conﬂict – 2013’ will not reveal the true extent of death, disappearance and damage caused by the war – CPA 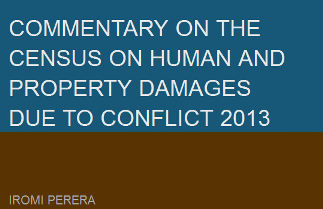 In a paper titled ‘Conducting Censuses under Challenging Situations, Crisis and post Conﬂict’4 that reviewed the different challenges facing census operations in situations of post crisis and post conﬂict, drawing from the experience of operations supported by the United Nations Population Fund (UNFPA) in different countries, there are certain measures that had been taken by countries such as Sudan and Kenya that Sri Lanka could have also adopted or revised to suit this census. Referring to types of adaptions taken in census taking exercises, it highlights the need to “build into census strategy, management and planning, some mechanisms that enhance credibility and secure acceptance of census results in a social and political environment where controversy can seriously damage the legitimacy, acceptance and utilisation of the statistical data”. These mechanisms include vigorous publicity and communication campaigns during the months preceding the census, leaders from all political parties seen publicly supporting the census and advocating for full and accurate information to be provided and engaging national as well as international census monitors, to provide independent, unbiased assessments on the reliability of the census process and its ability to produce   accurate results.

The numbers that will emerge from this census is crucial to the Government to counter the 40,000 death toll quoted in the report commissioned by the UN Secretary General Ban Ki-Moon5 in 2011, and even the number of disappearances. P.B. Abeykoon, Secretary, Ministry of Public Administration which supervised the census, at press conference in November 2013 stated “A lot of people have come out with various accusations with their own ﬁgures. We will come out with the real facts,”6. In the lead up the release of the preliminary data, State media quoted a Census Department ofﬁcial who claimed that the data for the number of disappearances used by the TNA and NGOs has been exaggerated and now that the Government has the correct ﬁgures, it will be able to prevent any adverse effect on the country7. This will probably be the strategy adopted by the Government and State media once the census results are released as the data will prove to be very useful to counter against accusations of war crimes, civilian deaths caused by the Government forces in the last stages of the war, military involvement in disappearances.