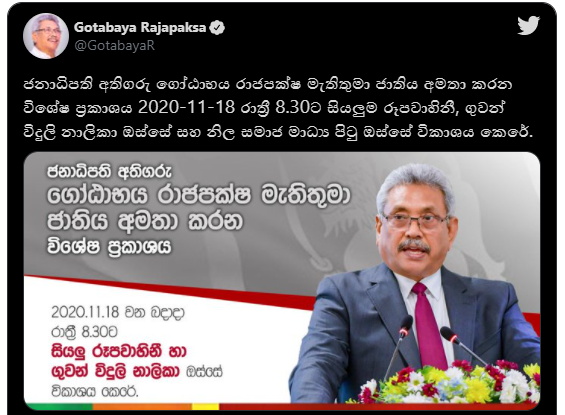 Image: Presdnets tweet announcing his speech will be on air via all TV & Radio channels as well as an official social media pages.

You take a step back as the ball bounces at breakneck speed and play defence. It is too early to lose your wicket, so one better learn the defence. This is what President Gotabaya Rajapaksa tried to do in his address to the nation.

It was the President himself who informed us via his Twitter feed that his address to the nation would be telecast and broadcast on all TV and radio channels. Heads of State address their nations at important times on important matters. But we don’t see them (or the authorities on their behalf) ordering all TV and radio channels to broadcast it live.

Under the presidency of Ranasinghe Premadasa, the first two minutes of TV news had to be devoted to the President. The story doing the rounds was that on a day when President Premadasa had not spoken anywhere, news editors had to insert a line saying that the “Honourable President Premadasa didn’t say anything today!”.

When the space for truth telling becomes restricted, satire comes to the front. There was a plethora of such stories on the grapevine during the suppressive President J.R. Jayewardene’s  era. Now social media has become the stage for such satire, and it is truly exhilarating.

President Rajapaksa may be the only person who knows the reason for asking all TV and radio channels to carry his recorded statement. Anyway, it cannot be an expression of confidence or a symbol of charisma.

When a politician thinks that they need to make everyone listen to their speech, that is a manifestation of force and authority. In every country there are people who do not have an interest in politics. They do not listen to an address to the nation, no matter who makes it. If you have to force people to listen to you that is an expression of failure.

This is how President Rajapaksa seems to be responding to the slogan “Gota Failed”. “The best yardstick of my success or failure is the public opinion and not the organized propaganda spread by political opponents on social media platforms.”

President Rajapaksa completes one year in the office amidst criticisms coming from two corners. One is the civil and political opposition. These are the forces that popularised the slogan “Gota Failed”.

The other critics have branded him as a traitor. These are the forces who carried Gotabaya Rajapaksa on their shoulders to the presidency. They are the  Alt-Buddhist monks. These monks now use filthy words to describe him on social media. One after another, these Alt-Buddhist monks are taking on the President over various issues. The President’s personal lawyer and Minister of Justice Ali Sabry is being attacked by them monks with hate-filled racism.

A space for civil and political opposition has opened up due to social and economic unrest in the country.  Alt-Buddhist monks base their assault on the government on the extreme nationalist politics propagated by the Rajapaksas. These monks are their own creation.

When a ruler starts dancing to the tune of the opposition, it shows that the ruler is in defence. The President’s speech, in cricket parlance, is playing backward defence. He lists his so-called achievements to fend off opposition criticism.

These words do not show confidence:

“I am a person who has constantly faced challenges and overcame them. I am not a person scared of empty threats. I don’t have the habit of simply running away from problems. Instead, I resolve those issues. “

Social media posts have drawn similarities between a junction thug who tries to make others afraid by shouting and the words of the President. Again, satire has come to fore.

Next there is a warning, probably aimed at Alt-Monks.

“I do not want to please anyone only for the purpose of securing votes. As I have pledged, my determination is to build a prosperous nation. I will not hesitate to take whatever action is necessary according to my conscience to achieve this target”.

Deplorably, the  major part of the President Rajapaksa’s speech was devoted to list what he has done. Even  Ranil Wickremesinghe and Maithripala Sirisena could have given such a list. No government sits idle. It does some work. Many items listed in President’s speech are such routine work.

If a politician has to list what he has done in an address to the nation, that means people do not see it. The same tragedy befell the  Ranil-Sirisena  government. But if one compares the list from the first year of the previous government, it is much longer than President Rajapaksa’s.

There is some important work that the President forgot to mention or deliberately avoided, including the Presidential Commission of Inquiry probing into Political Victimisation, one of his major political projects. No doubt the commission report will have far reaching political and legal consequences.

One of the first act of the Rajapaksa presidency was to allow unlimited sand mining of river banks and soil excavation. The President recently ordered the release of more than half a million acres of land from the Forest Department to local government political authorities to be used  for economic and other productive uses. These have not been listed as achievements.

On the top of all this, there is no mention of the COVID-19 preventive Ayurvedic drug combinations his minsters are championing. This should have been a major hit.

Only the President himself can fill in these blanks.

It starts with the words: “A year ago, more than 6.9 million voters in this country elected me as your new President. It is no secret that the majority who voted for me then were Sinhalese. They rallied because they had legitimate fears that the Sinhala race, our religion, national resources and the heritage would be threatened with destruction in the face of various local and foreign forces and ideologies that support separatism, extremism and terrorism.”

Then he goes on to say that “I have always acted in accordance with the pledge I made in front of Ruwanweli Maha Seya to protect the unity of the country and to safeguard and nurture the Buddha Sasana as per the Constitution, the supreme law of this country. I meet with an advisory council comprising leading Buddhist monks of Three Chapters every month to seek their advice on matters pertaining to governance.”

In his speech there is no mention of the Tamil and Muslim people who live in Sri Lanka. They are important communities no ruler should ignore. Are these words an anathema to the President?

He has right to say that he will protect the Buddhism. But in an address to the nation shouldn’t a president promise to protect other religions in the country, namely,  Christianity, Hinduism and Islam?  Not a word.

The Tamil national question has been one of the major political issues that has persisted since the independence. Almost all post-independence rulers of Sri Lanka accepted the need for a political solution. Alas, President Rajapaksa does not say a word on his plans to solve this issue.

He never mentioned human rights, one of the crucial  political discourses in the world today. Neither freedom of expression nor right to information is in his list of achievements.

He speaks of war heroes but not a word on justice for war victims.

In short President Rajapaksa’s speech once again confirmed Sinhala-Buddhist nationalism plus mere economic growth as his vision. The word “rights” is not in his vocabulary.

That is the bitter truth.