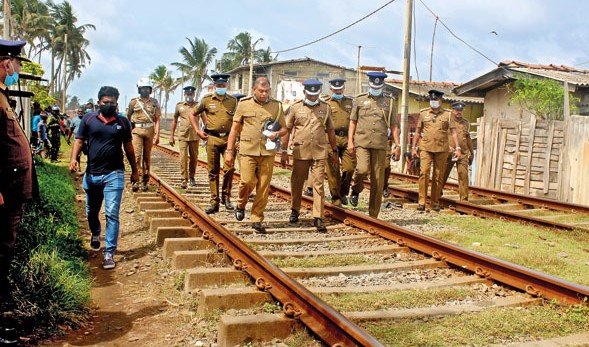 From a photojournalist being frogmarched by a suspect cop implicated in Sri Lanka’s 2012 Welikada prison massacre in the very premises of the High Court this Friday as aghast bystanders scuttled out of the way to lawyers being obstructed by members of the Special Task Force (STF) from conducting confidential consultations with their clients when visiting prisons, the signs are becoming quite unmistakable.

A perfect storm of the law being mocked at

This is a return of the big, bad wolf with a hideously familiar politico-police-military nexus, perhaps with more ferocity than before in this Covid induced nightmare. Add to this, the phenomenon of lawyers being arrested without reasons being given and we have the perfect storm of the Law and the Constitution being rendered a palpable mockery. For those less acquainted with the tortuous details of our impunity culture, it must be said that the Welikada prison massacre was no ordinary case. Indeed, this was more grisly than other killings given its occurrence within the walls of a state institution mandated to protect its inhabitants.

As the testimony of witnesses revealed in the High Court trial last year, following studied silence for eight years, the arrival of seven hundred and ninety eight STF and army commandos with automatic weapons, ostensibly on orders ‘from above’, at the Welikada Prisons on November 9, 2012 to ‘clean’ it of ‘undesirables’ soon intensified into a cold-blooded massacre of 27 prisoners. Gruesome accounts of how the killings took place, how teargas was flung into padlocked cells and how prison officials hid in horror, unable to stop the massacre, were recorded during the trial. Some officers testified that even now, they could hear the screams of the murdered echoing in their ears.

In common with other enforced disappearances and extrajudicial executions during this period, responsibility could not be traced as to who, in fact, had given the orders for the raid to take place. Former Defence Secretary and current President Gotabaya Rajapaksa explicitly denied issuing any orders in his evidence before the High Court. In that trial, the main accused was the former head of the Police Narcotics Bureau (PNB), that very same suspect cop who this week, grabbed a cameraman by his t-shirt and reportedly took his camera memory card despite the journalist being engaged in professional work photographing those who attended court hearings.

A message to all and sundry

This is, therefore, not a casual incident that we can just randomly brush aside as some would prefer to. As the journalist was frogmarched with purpose by the suspect cop up the steps and into the outer corridors of the court house even as he protested, this was no stealthy act. Clearly there was no inhibition, no fetter that this cop was aware of as his demeanour indicated. It could have taken place on any side street rather than in the precincts of a court house for all he cared. So this was a message to all and sundry, much like Sri Lanka’s national cricketers being hauled for a pseudo investigation on alleged match-fixing of the 2011 World Cup. In other words, the law is now becoming irrelevant to the national process.

Where this particular incident is concerned, media associations protested in immediate outrage and the Department of Government Information notified the police that an ‘impartial’ inquiry must be conducted in regard to this incident. Reports circulated of an ‘apology’ being tendered by the cop in the wake of these protests. But an ‘apology’ cannot detract from the fact that an assault took place within the court premises. Laying hands on another person’s body, forcibly taking him to another location, as indisputably recorded by onlookers, is a classic definition of physical assault, regardless of any other factor.

For that itself, the sternest action must be evidenced. Indeed, in most countries, threatening the media while it is engaged in the fair coverage of court proceedings would amount to contempt of court given its impact on a free and fair trial. At another level and where the rights of lawyers to consult with their clients are concerned, the Bar Association has roused itself from its selective slumber and called upon the Prisons to respect that right. In a recent letter to the Commissioner General of Prisons, the Bar has pointed out that “members of the legal profession are officers of Court, assisting the judicial system in the administration of justice.”

STF and prison officers were reminded by the Bar that they must not be present even ‘in the vicinity of such consultations within a distance where such officers may hear the instructions given and taken.’ This is all well and good but we may ask ourselves a pointed question. The right of a journalist to cover court proceedings, as much as the right of a lawyer to confer confidentially with clients, are basic rights long established in Sri Lanka’s legal traditions. Why are we at a point where minimal rights, including the right to give reasons for arrest, have suddenly become the subject of media and professional consternation?

The answer is simple. These are notable markers on a slippery slope regarding the potential loss of such rights. For as much as the Bar would prefer to stay quiet when an attorney is arrested with reasons not being given, this cannot be limited to ‘undesirables’ of a particular creed, religion or community. Principles, when professionally deserted, cannot be limited in impact only on a select few and not others. At one inevitable point or the other, this will impact everyone. These are lessons that we have surely learnt after decades of grappling with these questions in this country.

As we may recall, the dominance of a politico-police-military nexus was what enabled the Welikada prison massacre and many other killings of innocents to take place without a murmur at the time. This was also what enabled a sitting Chief Justice to be subjected to lewd mocking by parliamentarians at a select committee impeachment and the Secretary to the Judicial Service Commission to be assaulted in broad daylight. As officers of the Police Narcotics Bureau held on charges of links with drug dealers increase day by day, that nexus seems very plain.

An overwhelming sense of ‘deja vu’

Court proceedings, meanwhile, continue to be sabotaged, sometimes from within the justice system itself despite brave efforts of judicial officers and criminal investigators. With the security apparatus remaining intact during the time of the ‘yahapalanaya’ induced so-called rainbow revolution which soon fizzled out to just plain yellow, retired officers with intimate knowledge of past atrocities were terrified to testify in court.

That fear has now worsened a hundredfold. It is no wonder, therefore, that a suspect cop implicated in one of the most horrendous massacres that had ever taken place in the country felt bold enough to grab an innocuous cameraman by his shirt within the court premises, just for the act of photographing him. And all this with a full sense of impunity, quite regardless of the fact that he was being recorded doing so.

Indeed and sadly so, the sense of ‘deja vu’ is overwhelming.