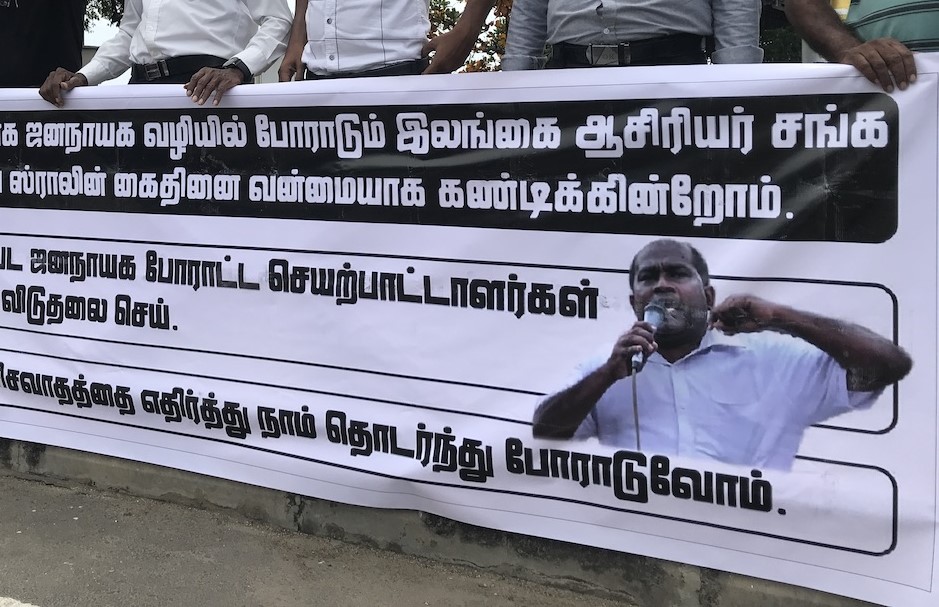 The Free Media Movement strongly condemns the arrest of Joseph Stalin, a senior trade union leader and a leading social activist, identifying this as an extension of the campaign launched by President Ranil Wickremesinghe’s government against Fundamental Rights, including the right to the freedom of expression.

A police convoy in three jeeps surrounded the office of the Ceylon Teachers’ Union in Fort on 3 August (evening) and arrested Joseph Stalin while he was in the Association office.  Engaging in a protest on 28 May in violation of a court order has been cited as the reason for his arrest. It is ironic that Saman Ratnapriya, who was also a key activist of the same protest, was appointed by the President to the position of Director General of Trade Unions, two days ago.

The police have recently arrested a significant number of people who were involved in anti-government protests, including agitation against the former president. Several journalists and activists were summoned to the Criminal Investigation Department for questioning. Information has been provided to the court against journalist Tharindu Uduvaragedara on the charge of criticizing the government. The Fort Police issued an order to the Galle Face protesters to vacate the area, despite the court previously rejecting several requests made by the police to remove the Gall Face protest site and to prevent protests.

Meanwhile, a formal investigation has not yet been conducted regarding the despicable attack on a group of local and foreign journalists who were reporting the attack on the Galle Face protest site in the early hours of 22 July, and serious suspicions have been raised that outside forces were used for the attacks. The Human Rights Commission of Sri Lanka conducted an investigation regarding the attack on Sirasa journalists who were reporting the protest near the Prime Minister’s residence on 9 July , and the commission concluded that the attack is a violation of human rights and that the Senior Superintendent of Police Romesh Liyanage is definitely responsible for the incident. The Commission observes that it has not been possible to identify the perpetrators due to the uniform which includes a face mask. Therefore the commission has recommended to the Inspector General that the uniform with a face mask should not be used for work with civilians.

On 2 August, the passport of a British citizen was impounded. She was a social media activist who reported on the people’s agitation through social media. She was accused of violating her visa conditions. As soon as the current president came to power, the emergency law was declared, and regulations have been stipulated in a manner that violates Fundamental Rights, including the right to protest, which is a part of the freedom to express opinions.

In a context when the citizens of Sri Lanka are exercising their Fundamental Rights as active citizens with great ownership and enthusiasm in a democratic manner more than ever before, it is the observation of the Free Media Movement that these repressive acts of the government only signals a move towards an authoritarian dictatorship challenging the very pillars of democracy. This is a short-sighted course of action that has disgraced the country internationally and exacerbated the ongoing crisis. This process is completely contrary to the contents of the throne speech made by the President in parliament a couple of days ago.

Therefore, we urge the President and the government to immediately release Joseph Stalin who was arrested and to respect and guarantee the Fundamental rights of the citizens including the freedom of expression and dissent and to refrain from adopting repressive measures including arbitrary arrests.