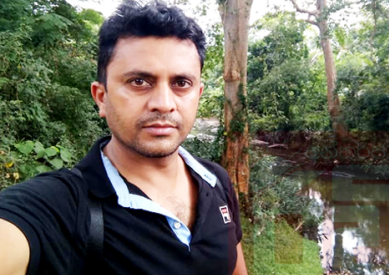 The Free Media Movement sees the arrest of Chamila Indika Jayasinghe of the Sri Lanka Administrative Service, (SLAS) who has been summoned before the CID for questioning over the sharing of a post on Facebook, as a new threat to freedom of speech and expression.

According to the victim Chamila Jayasinghe, he had asked for time due to the current epidemic situation and his arrest was arbitrary and forcible, and his and his wife’s mobile phones were also seized by the police on the charge that a comment shared on his Facebook account had caused a public unrest. The Free Media Movement, which sees the incident as a red signal to government officials to refrain from commenting and criticizing, believes this should also be seen as an attempt to restrict fundamental rights under the classification of cybercrime.

Chamila Jayasinghe, who had been an Assistant Commissioner of Land Settlement in Kotmale, had gone to the Colombo CID on May 21 and has been arrested. Chamila Indika Jayasinghe, was produced before the Colombo Magistrate’s Court No.7 on May 22 on the charge of ‘provoking the people against the government’ under Section 120 of the Penal Code. Magistrate Mr. T.K. Prabhakaran released him on bail. The magistrate rejected the request of the police to keep him under remand custody.

Free Media Movement considers that the public servants must have the right to enjoy every single right granted by the constitution. Charging that it causes public unrest and the threat of using such law in oder to intimidate public servants is likely to alienate public servants from contributing to the promotion of good governance, an essential factor. Thus, the FMM condemns such incidents as something to be despised by society.