The Al Jazeera interview with Mahinda Rajapaksa: Calling the bluff 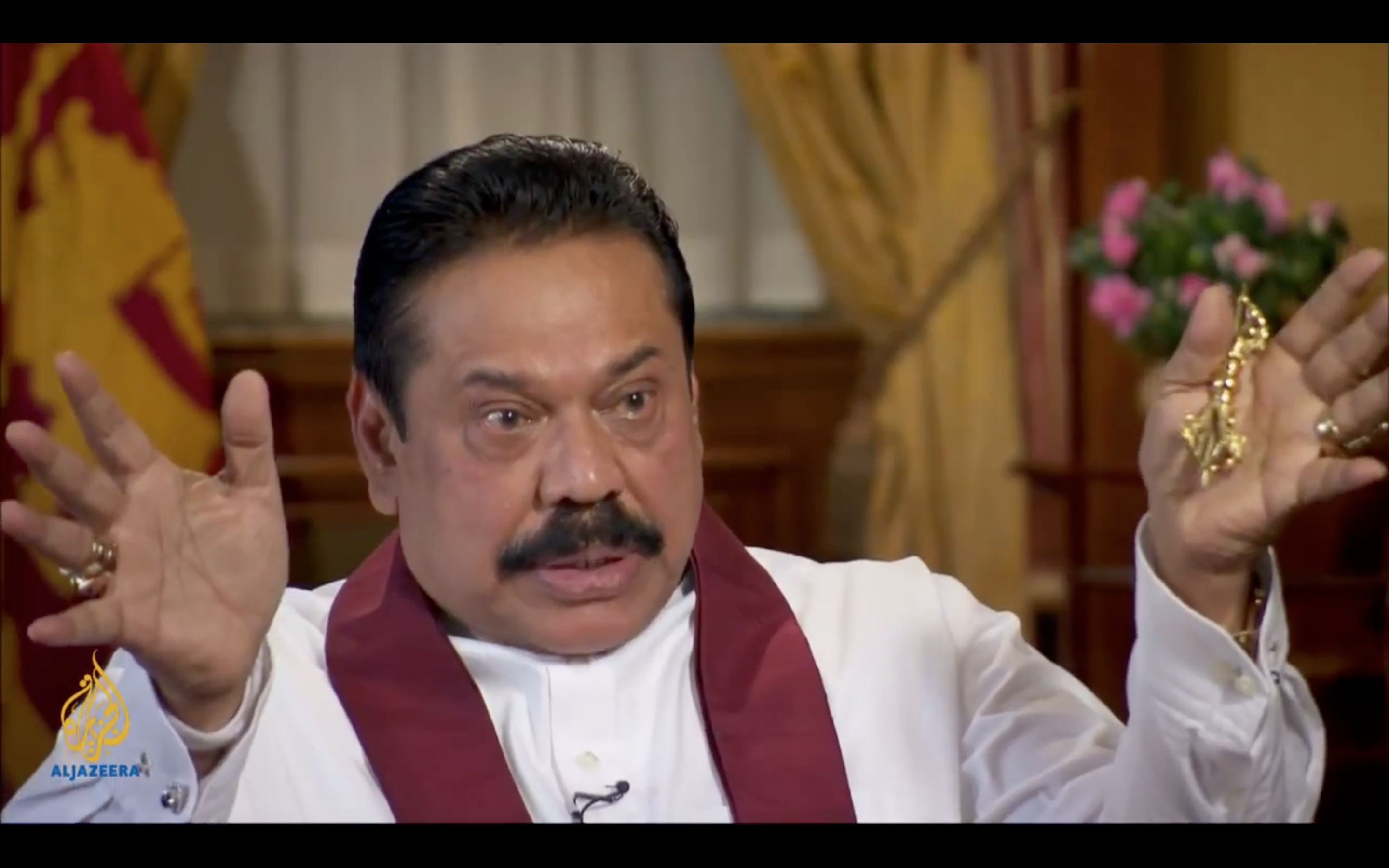 For starters, our President is clearly grossly uninformed or deliberately seeks to misinform. Take for example his assertion, around 8:50 into the interview, that European Union election monitors said the recently held Provincial Council elections in the North were free and fair. However, as far back as July this year, the EU categorically said they would not be sending any election monitors to Sri Lanka.
In fact, as the Sunday Times first reported and subsequently re-affirmed, Sri Lanka’s Elections Commissioner himself had taken the position “not to entertain monitors from countries that had voted against Sri Lanka at the March UN Human Rights Council sessions in Geneva”.

It is unclear how the President of Sri Lanka still believes the EU monitored the elections, and moreover suggests to international media that they endorsed the elections as free and fair. It would have been useful to ask the President what he thought of the Commonwealth monitoring team’s observations on the election, and those of India’s representative in the South Asian monitoring body.

Around 18:15 into the interview, and talking about the Weliweriya murders by the Sri Lankan Army, Al Jazeera’s James Bays refers to this trenchant article by Dayan Jayatilleka, Sri Lanka’s former Ambassador/Permanent Representative to the United Nations in Geneva. He was also subsequently Ambassador Extraordinary and Plenipotentiary of Sri Lanka to France accredited to Spain and Portugal and Permanent Delegate of Sri Lanka to UNESCO, Paris. The President’s response is revealing – he says that Jayatilleka is now part of “an NGO… a powerful NGO”.

In response to a query by us on this score, Jayatilleka sent Groundviews the following response.

“It is completely without foundation in fact. Doubtless the President has been grossly misinformed. I can state truthfully, categorically and unambiguously that I am not a member of an NGO, local or foreign, large or small. The last time I was a member of an NGO it was 30 years ago when I was a member of a local NGO called MIRJE (the Movement for Inter Racial Justice and Equality), based in Colombo. I would like to know which NGO I am currently supposed to belong to!”

After the Weliweriya violence, MPs in Parliament (notably Ranjan Ramanayake and Anura Dissanayake) openly questioned the actions of the Sri Lankan Army, noting that if this is what they did to unarmed Sinhalese in the South agitating for clean water, what they would have done to Tamil civilians in the North during the war, and in particular, in its final phase. In a similar vein, if this is what the President of Sri Lanka, openly and in public, says of a former high-ranking diplomat, readers can easily imagine the degree of propaganda and violence, with complete impunity, directed towards human rights activists in Sri Lanka who seek to hold the Government accountable for its human rights abuses.

Just before his comments on Jayatilleka, around 18:02 into the interview, the President avers that there are on-going investigations into the violence in Weliweriya. In addition to a Magesterial inquiry, the President notes that “we have also appointed an inquiry team to look into it” and goes on to say that “still I didn’t get the report yet”. It is unclear who the “we” he refers to is, but the submission that he’s not got any report runs counter to the Government’s own propaganda.

On 16th August, the Government owned and controlled Daily News newspaper noted that “a comprehensive report on the Weliweriya incident will be handed over to President Mahinda Rajapaksa today”. Interestingly, the Daily News story was about compensation for journalists intimidated and assaulted by the Sri Lankan Army, which the President failed to mention in the interview. A few days earlier, quoting Army Commander Lieutenant General Daya Ratnayake, news media reported that “the report prepared by the Sri Lanka Army Court of Inquiry (CoI) appointed to investigate the army’s involvement in the Weliweriya shooting incident on August 1 has been handed over to the legal section of the Army” (see also this report).
That Sri Lanka’s Commander-in-Chief is to date unaware of this report is impossible to believe.

Around 12:00 into the interview, the President claims that the Army strength in the North of Sri Lanka is only around 8,000 – 12,000 personnel. The number is incredible firstly because there are no independently and easily verifiable number of troop strength in the North, post-war. In September 2012, India’s The Hindu reported a number as high as 85,000 – 86,000 troops present in the North and East alone. Two months earlier, this article on Groundviews debunked Government claims at the time that this number was around the 15,000 mark.

Around 12:20 the President’s unequivocally notes that the Army has released all private lands, and a few seconds after reiterates this same point. This is a blatant lie.

At around the 12:30 mark, the President responds to a point made James Bays from Navi Pillay’s report, noting the high degree of militarisation in the North of Sri Lanka. Refuting Pillay’s concerns, the President says that she must have been referring to the School Cadet Corps. In fact, in March this year, the Economist reported that Teachers Unions in Sri Lanka said nearly 4,000 headteachers were invited to interviews at the National Cadet Corps, with successful applicants getting 45 days of training and full military titles.

Around 16:30, the President of Sri Lanka dismisses the country’s on-going abductions and disappearances with a truly bizarre story about a 23-year old girl and her boyfriend. He then says the ‘white van’ abductions are mere speculation and propaganda, and avers, with a smile, that blue vans and black vans could be used instead of just white vans. This overt conviviality attempts to mask a truly horrible violence, even post-war, as the BBC’s correspondent Charles Haviland wrote about last year, which simply cannot exist without the complicity of those at the highest levels of government.

Around 19:50 into the interview the President addresses a question over attacks on religious minorities. Not unlike his response to the white van abductions, he responds with a very strange story of a girl who has been raped. The President’s answer suggests this act “naturally” results in attacks against the perpetrators, no matter what their community or religion. This strongly suggests that Sri Lanka is today governed by a tribal justice, and that there is no role or relevance for the Rule of Law or due process. The President’s answers in this segment also demonstrate he is unaware of or seeks to downplay the seriousness of the situation, as brought out by this online poll, incident maps of the violence and these reports.

Finally, and this is peripheral to the more serious concerns over the President’s terminological inexactitudes flagged above, what does he sport in his hand? We haven’t seen him carrying this around in his first term in office, and it’s very possibly something astrologically determined. While there have been some photographs in the past with glimpses of this strange object, the Al Jazeera interview offers us the best look at it to date. 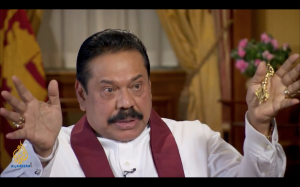 We just wonder what kind of gilded protection those committed to a more democratic Sri Lanka need to sport.