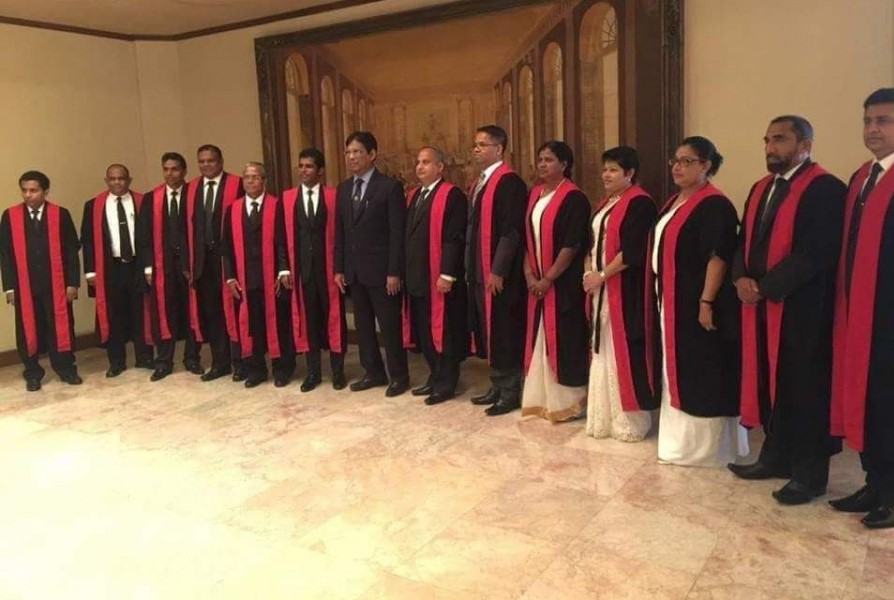 Eyebrows are being raised over the 20th Amendment to the Constitution’s inclusion of provisions at committee stage to increase the number of judges in Sri Lanka’s superior courts of record, the Supreme Court and the Court of Appeal.

Justified by the Justice Minister on the floor of the House on the rationale that the increase was due to a heavy backlog of cases in both courts, this clause was however not previously in the Government’s package of amendments presented to the Supreme Court by the Attorney General during consideration of the 20th Amendment Bill. It was inserted into the 20th Amendment in Parliament despite the Minister’s categorical assurance to Opposition parliamentarians that, no new amendments, apart from amendments in the public domain, would be brought to the Bill at committee stage.

However that may be, the 20th Amendment is a fait accompli. Questions have been asked by opposition parliamentarians as to whether this last minute inclusion of the amendment of Article 119 and Article 137 of the Constitution may lead to ‘packing’ the Court with friendly appointments in order to minimise the possibility of potentially adverse court rulings. This allegation will only be proved or disproved as the case may be in the future. Speculation at this point is hardly advisable.

However, the concern thus raised should compel the President and his Government to be fully conscious of this fact when making appointments to the superior courts of record in pursuance of that amendment. That duty is all the more severe given that presidential power in making judicial appointments has now returned to the largely unfettered state of the 1978 Constitution, unlike under the 19th Amendment to the Constitution where the Constitutional Council acted as an intervening influence.

The one distinguishing factor is that the President’s immunity in respect of unconstitutional actions is no longer in force. Even so, it is difficult if not impossible to envisage situations where presidential appointments may be constitutionally challenged for suitability. On the face of it, the proposal to increase judges of the superior courts had been pending for some time. Even under the previous Government, it had been announced that the number of judges of the Supreme Court will be increased to fifteen given the backlog of cases prevalent in the Court though no further steps were taken in this regard.

True, the problem of laws delays is an entrenched and detested part of the legal process. This is a problem that has been acknowledged by the judges themselves for decades. The “chronic delay and frustration” in a typical civil litigation was succinctly summed up by a onetime President of the Court of Appeal when, after analysing the case flow statistics, he pointed out that the system reflects “excessive judicial passivity in an adversarial, undisciplined legal procedure with limited availability of versatile alternatives to a protracted trial…where the institutions of civil appeals far outnumber the disposals.” (see address of Justice Ameer Ismail at the ceremonial sitting on his assumption as President, Court of Appeal, The Daily News, Tuesday, August 25, 1998)

However, does increasing the number of judges of the superior courts suffice to address this problem? The failure of courts to perform is not limited to appellate court judges. Instead, it is an endemic problem arising from the lowest levels of the court system to the highest, affecting the criminal justice system as much as civil litigation. There is little need to appoint further committees to look into why this is so. At least where delays in the criminal justice system is concerned, what remains one of the best reports of its kind, is the 2004 Report of a Committee Appointed to Recommend Amendments to the Practice and Procedure in Investigations and Courts. That Report must be taken out of whatever drawer that it is languishing and its recommendations implemented.

This Committee identified the absence of police officers at stages of the trial as key reasons for laws delays in the criminal justice process. Its recommendations propose the introduction of administrative measures requiring police officers to attend court on a compulsory basis, pointing out that police officers ‘obtain leave and abstaining from court sighting inappropriate grounds’ which results in unnecessary disruption of court proceedings. It advocates strict magisterial supervision in investigations to be prescribed by statute and recommends that defence lawyers be allowed access to all statements recorded during the course of police investigations.

In regard to the judicial handling of the caseload, the Committee observed the breaks in the continuity of trials in the High Courts were a key factor for the delay and suggests that the names of judges who are appointed to the Court of Appeal are gazzetted and that they be required to conclude all partly heard cases in which the prosecution has concluded its case. Consequently, the ensuring of cases before the High Courts to be heard on a day-to-day basis is recommended as a matter of priority.

Accountability of the judiciary

But even with the best of intentions, addressing laws delays alone will not be enough to address public confidence in the judicial institution. For that, accountability of the judiciary is important. Regional and global standards on judicial accountability must be given heed to and the transparency of bodies such as the Judicial Service Commission (JSC) must be ensured. Codes of Ethics applicable to judicial officers and strictly enforced thereto dictate that while it is the role of judges to decide on disputes before them fairly and to deliver their judgments in accordance with the law and the evidence presented before them, judicial decorum must be of the highest importance. These are of the highest importance in Sri Lanka where our judiciary has been subjected to extreme turbulence.

One man, one power

Such reminders are more important than ever now, as the Constitution itself is returned to the 1978 constitutional ethos of ‘one man, one power. Transparent systems of judicial discipline, whether of the subordinate courts or at the higher courts are yet outstanding. The political nature of the impeachment process applicable to judges of the higher courts is of historical record. We have seen all too well, the unfortunate consequences of subjecting judicial accountability to parliamentary supervision.

What Sri Lanka needs are not seminars and conferences on the Rule of Law and the independence of the judiciary replete with the usual pontifications by Ministers and their acolytes. What we should see instead are powerful symbols of integrity in public life and a healthy public demand for effective systems of accountability at all levels, including the judiciary. If needs be, the coming new Constitution that we have been promised and subordinate laws should be reformed for that purpose.

Let us see what the future holds.