The 20th Amendment Bill – Lest we forget – Dr. Nihal Jayawicrama 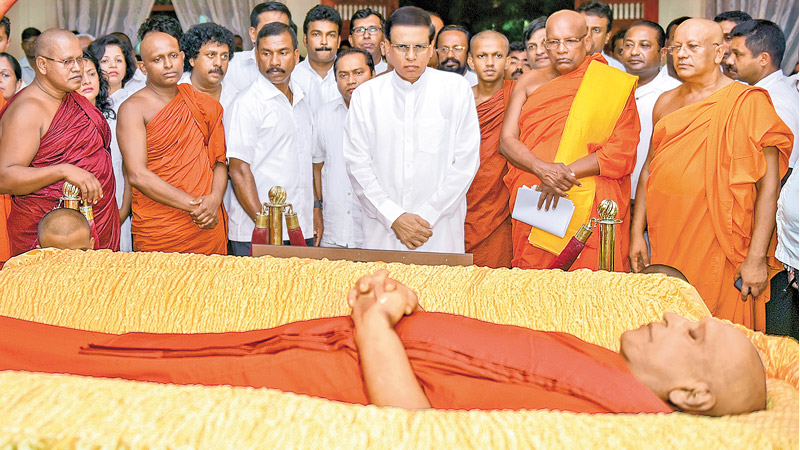 Image: Maithripala Sirisena, he who stood before the casket bearing the remains of the late Rev. Maduluwawe Sobitha, and with his head bowed swore an oath that he would ensure that all remnants of executive power would be removed from the office of President of the Republic.

Strident calls were repeatedly made from many quarters for the 19th Amendment to the Constitution to be repealed. Some argued that it should be repealed in its entirety, while others pleaded for the retention of some of its provisions.

What has been overlooked is that there is no 19th Amendment capable of being amended or repealed. It does not exist. It has not existed since 15 May 2015 when the 19th Amendment Bill, having been debated and passed in Parliament, was certified by the Speaker.

Indeed, none of the previous 18 Amendments to the Constitution exist today. Therefore, the 19th Amendment cannot be repealed, whether in its entirety or partially. What we do have is the Constitution of 1978 which has been amended 19 times.

Some of the amendments incorporated in the Constitution by the 19th Amendment were admittedly flawed. For example, the Constitutional Council was intended to enable community participation in the appointment processes at the highest levels of the Judiciary and of independent commissions.

However, at the committee stage of the debate, Parliament decided that the 10-member Council should be composed of seven parliamentarians instead of seven “persons of eminence and integrity who have distinguished themselves in public or professional life and who are not members of any political party”.  Five years later, the Council thus constituted still functions on an ad hoc basis, having failed to formulate the procedures for the transaction of its business, as required by the Constitution.

Another defective provision is the three-member Elections Commission, with the quorum also fixed at three, with a proviso that the Commission may function in the absence of the Chairman, “with a member elected by the members present from amongst themselves presiding at such meeting”. Equally incomprehensible is the requirement for the President to act on the advice of the Prime Minister when appointing Ministers, but not when appointing Secretaries to their Ministries.

It was, however, one single transitional provision inserted into the Constitution at the instance of the majority SLFP and its leader, the then President, that made good governance impossible. That provision read as follows:

“Notwithstanding anything to the contrary in the Constitution, the person holding office as President on the date of commencement of this Act, so long as he holds the Office of President may assign to himself the subjects and functions of Defence, Mahaweli Development and Environment and determine the Ministries to be in his charge for that purpose.”

The 19th Amendment transformed the office of President, which was previously vested with absolute executive power, into a constitutional Head of State who was required to act on the advice of the Prime Minister and the Constitutional Council in respect of his constitutional functions. It also required the Cabinet of Ministers to be drawn only from among Members of Parliament.

Nevertheless, this transitional provision empowered President Sirisena, who was not a Member of Parliament, to appoint himself as a Minister, and to hold three Ministries including the vitally important one of Defence. It was a recipe for disaster, which led not only to regular conflicts between the leaders of the Coalition Government, but also to the tragic 21 April massacre. The 20th Amendment Bill does not seek to address any of these or other deficiencies. Instead it seeks to restore the original 1978 Constitution.

He described that Constitution as being “in accord with the Basic Principles accepted by the 1975 Party Sessions of the United National Party”. It is that Constitution, which was emphatically and vehemently opposed by the SLFP, together with the LSSP and the TULF, which the present SLPP/SLFP Government now proposes to revive.

In the National State Assembly, on 3 August 1978, when the draft Bill for the 1978 Constitution was presented, the Leader of the SLFP, Sirimavo Bandaranaike, recalled what she had predicted when the Second Amendment to the 1972 Constitution sought to confer on Prime Minister J.R. Jayewardene the powers of both President and Prime Minister:

“I said that that amendment will set our country on the road to dictatorship, and that there will be no way of turning back. I warned that once that amendment became part of the Constitution, the erosion of the democratic process will not only be inevitable, it may also be irreversible.”

She continued: “It has taken this Government and this Assembly barely 10 months to reach the end of that road. Within a matter of days, or perhaps even of hours, the last remaining lamp of freedom will be snuffed out. The events of the past few months are reminiscent of the last days of the Weimar Republic when Adolf Hitler, using the constitutional process, rapidly destroyed the foundations of the constitutional state. He too combined in his person the powers of President and Chancellor, and then transformed by constitutional amendment a federal democracy into a centralised autocracy under the direct control of the Fuhrer. He, too, relied on a massive mandate which he had received at a plebiscite, and insidiously removed every constitutional protection contained in the Constitution of the Weimar Republic until finally the only political sanction that remained in Germany was the despot’s whim.”

The office of President under the 1978 Constitution was vested with absolute power and was placed above the law and beyond the reach of the courts. With a parliamentary majority of over two-thirds of the membership, President Jayewardene proceeded, as Mrs Bandaranaike had predicted, to entrench an executive led and controlled system of Government and thereby further extend the frontiers of his autocratic control.

In the 37 years that an “Executive President” reigned over Sri Lanka, an almost unbridgeable gap was created between political parties and between ethnic groups. The country was torn asunder, and its people were brutalised.

The President became the supreme source of patronage in the Republic. Corruption was entrenched, and judicial integrity, particularly at the highest levels of the judicial hierarchy, became all but non-existent. It is that system of governance that the 20th Amendment Bill seeks to revive and install.

The 20th Amendment Bill seeks to restore to the office of President all the powers which President J.R. Jayewardene enjoyed under the 1978 Constitution, but which were either repealed or modified by the 19th Amendment. Among them are the following

(i) Article 35: No action of the President, either in his official or private capacity may be questioned in any court. (The 19th Amendment enabled an official act of the President to be challenged in the Supreme Court if it infringed a fundamental right by instituting proceedings against the Attorney General. An example was President Sirisena’s 2018 illegal appointment of Mahinda Rajapaksa as Prime Minister and subsequent illegal dissolution of Parliament. The repeal of this entitlement of the citizen may require approval at a referendum since it infringes the fundamental right to a remedy).

(ii) Chapter VIIA: The President shall appoint the Chief Justice and other Judges of the Supreme Court and Court of Appeal. He shall have the power to appoint and remove the Attorney-General, Auditor-General, the Ombudsman, the Secretary-General of Parliament, and all the Independent Commissions including the Elections Commission and the Judicial Service Commission. (The Constitution now requires him to obtain the “approval” of the Constitution Council before making these appointments. That institution is to be replaced with a “Parliamentary Council”, a token body which may only make “observations” on proposed appointments).

(iv) Article 44: The President may assign to himself any subjects or functions and create and hold any number of ministries. (The Constitution now does not allow the President to be a Minister. Only a Member of Parliament may be a Minister).

(vi) Article 85: The President may secure the passage of a Bill that has been rejected by Parliament by submitting it to a referendum. (This power does not exist now).

(vii) Article 122: The President may certify that a Bill is “urgent in the national interest”, whereupon the Supreme Court is required to determine its constitutionality within 24 hours and communicate that only to the President and the Speaker. The Bill will then be rushed through all its stages and become law without any intimation to the country or its peoples. (The 19th Amendment repealed this power in 2015).

(ix) Article 155G: The National Police Commission is stripped of its power of appointment, promotion, transfer, disciplinary control and dismissal of police officers. (That power was conferred on the Police Commission by the 19th Amendment).

(x) Chapter XIXA: The Commission to Investigate Allegations of Bribery or Corruption is abolished. (Constitutional status to this Commission was granted by the 19th Amendment).

(xi) Chapter XIXB: The National Procurement Commission is abolished. (This Commission was established by the 19th Amendment).

In the National State Assembly, on 3 August 1978, the Leader of the SLFP, the late Sirimavo Bandaranaike, concluded her speech thus:

“I would like to state, on behalf of myself and of the Sri Lanka Freedom Party, that the day on which the dictatorship of His Excellency Junius Richard Jayewardene is established by means of the so-called Constitution of the Democratic Socialist Republic of Sri Lanka, will also be the day on which we begin our struggle outside this Assembly. We will go to the people, and together we will strive to set alight once more the lamps which you have extinguished. I know that there will be ranged against us not only the forces of local reaction to which you have given new life, but also those of neo-colonialism which have at long last been provided with a foothold here in Sri Lanka. I know that the full force of State power will be used against us, and we will probably be arrested under your new laws, and brought before your new courts, and locked up in your new jails. But no people fighting for their freedom have been deterred by such acts, threats, or fears. The Sri Lanka Freedom Party, which has been sanctified by the blood of its founder, will certainly not be deterred.”

In one of those inexplicable ironies of Sri Lankan politics, it was a UNP minority Government that, with the support of the majority SLFP, successfully disengaged from the 1978 Constitution, and it is the SLFP that is today lending its enthusiastic support to reinstate what its former leader described as “the dictatorship of His Excellency Junius Richard Jayewardene”.

Should not the SLFP members who sit in Parliament today remind their present leader, Maithripala Sirisena, that it was he who stood before the casket bearing the remains of the late Rev. Maduluwawe Sobitha, and with his head bowed swore an oath that he would ensure that all remnants of executive power would be removed from the office of President of the Republic?

(Courtesy of the Daily FT)