Thajudeen Murder: Then a Mystery, Still a Mystery 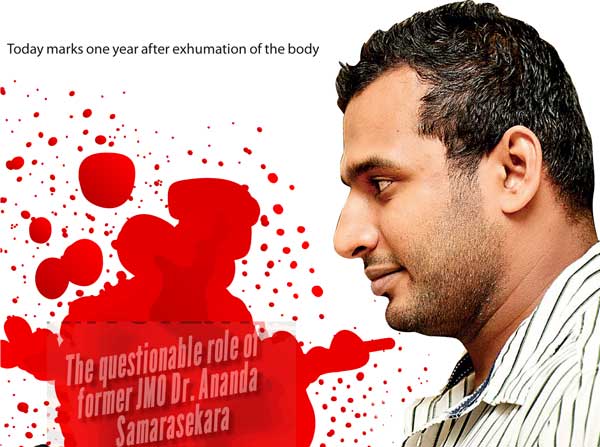 Wasim Thajudeen, a talented rugby player, a friend to all and a man full of smiles, was brutally murdered and his body was left in a charred state at Narahenpita, four years ago.

After much investigation, many breakthroughs and dead-ends, the case is yet to be solved. Although nothing was heard of the incident during the previous regime, quite surprisingly the matter emerged as soon as the ‘Good Governance’ regime saw light on January 8 last year.

So far, much has been revealed about the matter but even after four years, the alleged perpetrators are still free. The body was exhumed on August 10, 2015, exactly one year ago and according to the ex-JMO, surprisingly, some of the remaining body parts too have gone missing.

The Judicial Medical Officer’s (JMO) reports have become the highlight of this investigation due to the failure to establish a conclusive cause of death initially.

Today the Daily Mirror sheds some light on the JMO’s reports, which were submitted to establish the cause of death.

Speaking to the Daily Mirror, sister of the deceased, Dr. Ayesha Thajudeen, a dental surgeon by profession, said that it was traumatising to see one development after the other, every day.

“We want to serve justice to his soul but there are many questions that still remain unanswered. There should have been a political time frame within which this matter should have been solved. My family is peacefully protesting.

“We saw what violence is, and we do not want an answer through more violence. In one leading newspaper I saw that my family was misquoted as claiming that one of us had said if this matter isn’t solved, that we would take to the streets. I wonder why they would have even done that. Wasim was a friend to all, and if at all he had an enemy he would have revealed it. Some believe in all the gossip about him having an affair with Yasara Abeynayake, but I challenge them to show at least a photo or any indication that they were in a relationship. Gossip is not what we want. We want to know why he was brutally murdered.”

Speaking about the post mortem, she said that she was the first witness who was shown the body.

“The day of his death was like a war to me. I still recall how I was pressurized by Dr. Ananda Samarasekara, ex-chief JMO at the time of Thajudeen’s death, to go back home, get diagnostic reports of my brother for evidence of his previous injuries during play, write affidavits, and when the first affidavit wasn’t professional enough how I again had to re-write it, find a Justice of Peace, get it signed and finally claim the body.

“It was traumatising to go through this drama, when my brother’s remains were lying just like that. What I don’t understand is, when the initial X-ray was done to identify his previous injuries why Dr. Samarasekara never showed it to me. I myself am a medical practitioner and I have read through forensics to understand the procedures when conducting a Post Mortem examination. Why he would have done that remains a question, to which I think only he can provide an answer. His JMO Report had no conclusion initially. Then he had to submit two other reports and there was a third report done by a panel of three eminent professionals in the field after the exhumation.

“There was no way they could have been biased because there were three people involved. After Wasim’s body was exhumed, when Dr. Samarasekara was analysing the injuries, the body parts went missing. “Now he is being questioned by the Sri Lanka Medical Council (SLMC) which has also dragged the case for a long time. Then former DIG Anura Senanayake was taken in for questioning but as far as I am aware, he has not spoken up. To make things worse I wonder why he was sent to the Merchant’s Ward. ”

In order to find out his opinion on these allegations, the Daily Mirror spoke to former JMO Dr. Ananda Samarasekara, who said that the final judgement was based on his report.

“The reports given by myself and the panel of three other doctors were almost the same. There were one or two things, which we didn’t agree on, but the rest was the same. The main difference is that I have said that the cause of death is mainly Carbon Monoxide poisoning in addition to the injuries and burns.

“Soon after the autopsy was done, I submitted a preliminary report but here the cause of death wasn’t mentioned. Then the Police took the body parts for investigation and even after nine months I didn’t receive the samples.

“Then two years after the incident I had to do another interim report and when the body was exhumed I submitted an addendum to the interim report.”

When asked about the inquiry carried out by the Sri Lanka Medical Council , Dr. Samarasekara said that it was on the missing body parts.

“After the exhumation certain bones were retained for further examination at a mortuary section of a certain institution. But by that time I too had retired from the field. The bones were kept in a refrigerator, which had eventually broken down.

“Thereafter these relevant body parts had gone missing. Then when the two mortuary assistants were questioned they also took statements from me. Still the inquiry is going on for the past three months.”

“He produced what was called a preliminary report, then two years later, another interim report and another report called an ‘Addendum to the interim report’ after the exhumation of the body.

“He terms it a so-called accident, when what exactly had happened is a murder. Because it is clearly shown that the injuries which were caused wouldn’t have taken place with such intensity if it were an accident.

“If he had given his opinion at least in the interim report, there would have been no need to produce another final report. The report I produced was after the body was exhumed and it was done alongside Dr. Jean Perera and Dr. Hewage.”