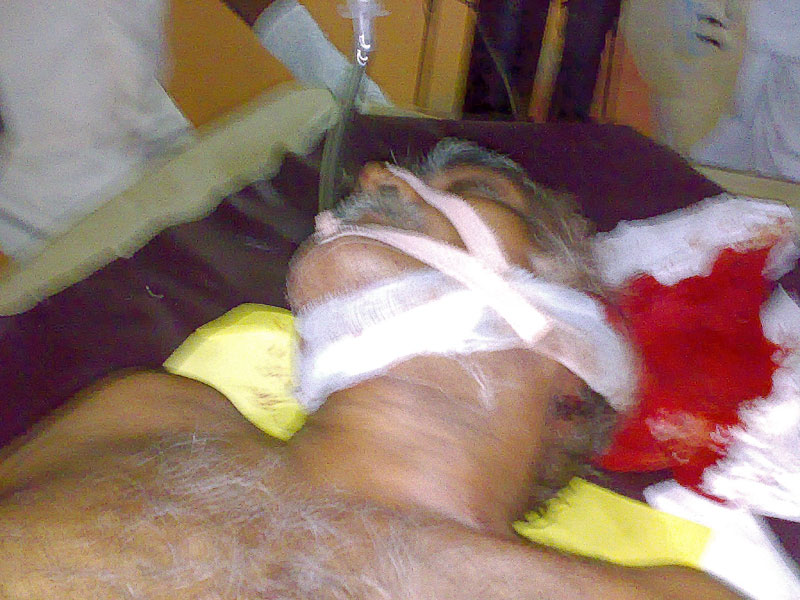 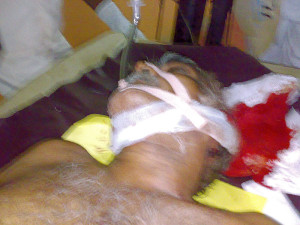 The latest attack on the news editor of the Jaffna-based Uthayan newspaper, Gnanasundaram Kuhanathan should not be understood merely as an isolated attack on media freedom and freedom of speech in Sri Lanka. It undoubtedly bears far reaching implications and reveals the vicious nature of the renewed and accelerated violent attacks on democratic rights of Sri Lanka’s Tamil people. This cowardly act on unarmed media man has been carried out by sinister elements that have got the full blessings and backings of the political and military authorities in the country.

The 59-year old news editor was on his way home from the office after work when the two armed men attacked him from behind using sharp iron rods and cables.

He was rushed to the Jaffna Teaching hospital with serious injuries to his head. Kuhanathan’s house is located within 200 meters from the office and the attack on him has notably taken place barely 30 meters away from a military check-point on the Kasturiar road-Navalar road junction.

Reports from Jaffna now reveal that the attack has been pre-planned as the neighbours of Kuhanathan have noticed three unknown men lingering suspiciously around the neighbourhood for several hours on the previous night.

This is the second attack on Uthayan journalists within the past two months. On May 28, 2011 one of its reporters S. Kavitharan was attacked by armed thugs in a similar style when he was on his way to work.

The Uthayan newspaper and its staff, including its editor, have been under numerous attacks in the past few years. Several of its journalists and even the newspaper distributors have been killed and more have been threatened with death.

No one has been brought to book to date and the culture of impunity continues to prevail. Undeterred by such threats and attacks, the Uthayan newspaper continues to print daily tabloid and publish articles and news items that even the mainstream newspapers choose to censor for fear of reprisals.

The attack on the top journalist immediately after the conclusion of the local government elections amidst disproportionate military presence in the northern Jaffna peninsula, has made one thing repeatedly clear — that the government’s war on media and democracy is still actively on.

The government, coming under ever increasing international pressure over the wide-spread war crime allegations during the final weeks of the war in May 2009, hurriedly conducted the elections for the local councils even without resettling the war-displaced civilians in the north. This was mainly aimed at hoodwinking the international community that the democracy has been fully restored in the former rebel heartlands.

The government overtly used state resources, including the military and police force, for election propaganda purposes during the run upto the local poll that was held on July 23.

President Mahinda Rajapaksa flanked by many top cabinet ministers camped in the north and addressed not less than five election rallies there, persuading the war-ravaged people using all the tactics at his disposal to vote for his party. Attacking an opposition rally in Alaveddy in Valikamam north, using military personnel in civvies was one such tactic.

This shows how desperately the government wanted to win this election.

If it promised the people with various development projects to rebuild the north, it also threatened the people that the victory for the government’s coalition would be inevitable for release of thousands of their beloved Tamil youth currently held in the detention and torture camps in the south.

The conduct of the very election was widely criticized and condemned. The soldiers both in military uniform and civvies went to the extent of intimidating and threatening the voters either to vote for the government coalition or to stay away from exercising their franchise. Voters were intimidated and their ballot papers were forcibly taken away at gun-pint by elements supportive of the government.

Still, the people of the north took the risk and voted for the Tamil National Alliance (TNA) which has won 18 of the 23 local councils, dealing a humiliating defeat to the hawkish Rajapaksa government.

Despite wining the local election hands down, the TNA, which was once close to the Liberation Tigers of Tamil Eelam (LTTE) has urged the Election Commissioner to annul the poll in many areas, citing the scale of poll-related violence during and in the run up to the poll.

Angered and humiliated by the verdict of the people, the government appears to have reactivated its paramilitary groups and killings squads to intimidate and carry out attack on local leaders and media as means of political reprisals.

Unable to stomach the election defeat in the hands of the TNA, the government’s election propaganda in-charge Minister Basil Rajapaksa has sarcastically remarked that the people in the north has given the mandate to the TNA just to fix the street lights and water pipes.

In the above context the attack on Kuhanathan should not be seen in isolation. It is a clear indication of how things are unfolding systematically in the north, which is heavily guarded by over 40,000 troops. The attack has also proved beyond any reasonable doubt that mere statements of condemnation and appeal for good governance by the all powerful international community are nothing but futile exercise.

Holding an election is only an aspect of democracy and will not reflect the full restoration of democracy or normalcy as the government is desperately trying to make it out to be.

Therefore, immediate demilitarisation of the north is a key to any meaningful exercise to restore democracy and normalcy as the disproportionate military presence in the north is a serious threat to the will and the independence of the people in the area.

Until then the so-called democracy will inevitably be at the mercy of the heavily armed military personnel and paramilitary outfits, which are obviously groomed and controlled by the political authorities in the island nation.
© Journalists for Democracy in Sri Lanka | www.jdslanka.org