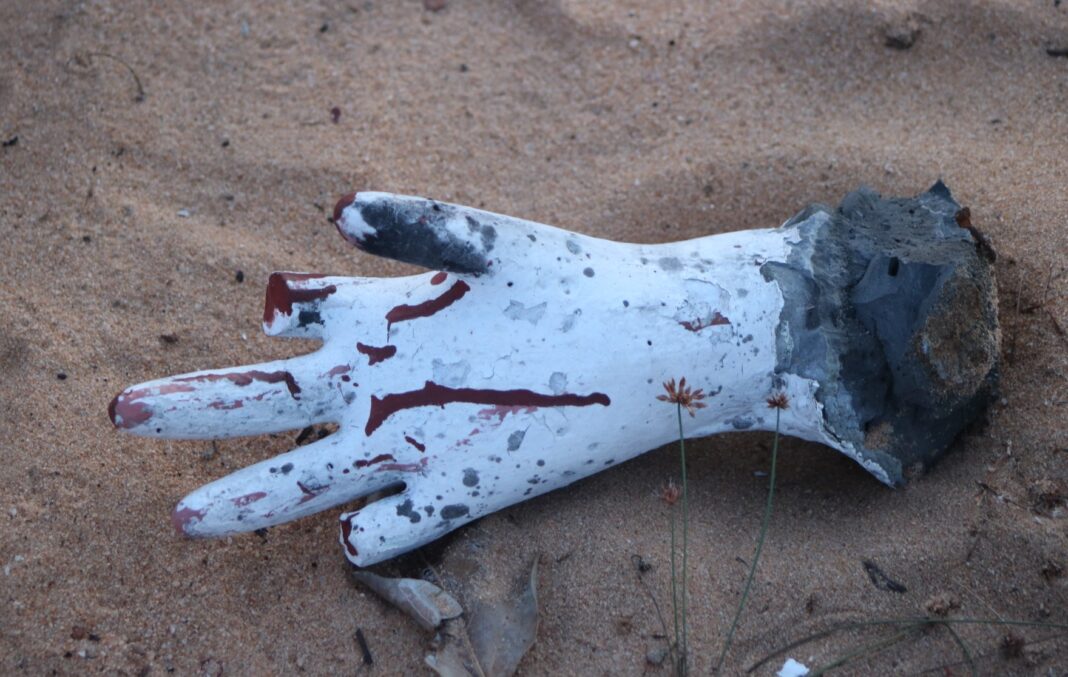 Image: A memorial monument, which depicts a pair of outstretched hands, had been broken off and tossed into the nearby sand. In recent years the monument was the site of annual memorials, with survivors of the massacres lighting flames of remembrance on it.- Tamil Guardian.

By Meera Srinivasan /The Hindu.

‘Height of indecency’, says TNA in a statement.

A new memorial plaque for Tamils killed in Sri Lanka’s civil war, along with monuments erected earlier, were found vandalised on Thursday in the northern Mullaitivu district, according to a committee organising the remembrance event falling next week.

Accusing the army of destroying the war memorials for Tamils, the Mullivaikkal war remembrance committee voiced concern over the “continuing attack” on Tamils’ right to memorialisation. The army denied involvement in the incident.

In the brutal final battle of the civil war in May 2009, tens of thousands of Tamil civilians were trapped and killed in Mullivaikkal, located along the north-eastern coast of the island. Every year, Tamils remember their loved ones on May 18, a day that brings back distressing memories to scores of affected families.

The government, on the other hand, marks May 19 as ‘Ranaviru [War Heroes] Day’ in the south, hailing soldiers “who fought terrorism”, by defeating the separatist LTTE. The end of the war is either about “victory” or tragic loss, depending on which side of the ethnic divide it is viewed from. It remains a sensitive issue in Sri Lanka, 12 years after the war ended.

“We went to place a new stone plaque in memory of those who were killed in Mullivaikkal, last night [Wednesday]. Army and police personnel at the spot asked us to return. We left the plaque nearby and came back. When we went back early this morning, the plaque was missing and other monuments erected there earlier were destroyed,” said Fr. Sinnathurai Leo Armstrong, co-chair of the remembrance committee. “I see this as a deliberate, genocidal act. It is a continuation of the Sinhala state’s history of trying to erase Tamils’ identity,” he told The Hindu.

When contacted, army spokesman Brigadier Nilantha Premaratne said the army had no role in the destruction of the monument. “Most of the monuments have been there for a few years now and there has been no problem. It is possible that some third party vandalized the structures to cause disharmony,” he told The Hindu. Asked how the new plaque went missing, when army personnel reportedly guarded the area, Brigadier Premaratne said police would probe the incident to find out who was behind the act.

This is not the first instance of Tamils’ war memorial being destroyed overnight. Rights groups in Sri Lanka, international watchdogs, and the UN have repeatedly highlighted the denial of Tamils’ right to remember. In January this year, authorities at the University of Jaffna bulldozed a memorial erected two years ago in memory of the civilians who died in May 2009. Following student protests and pressure from different quarters, including India, authorities rebuilt the monument on campus, and unveiled it last month.

Condemning Thursday’s development in Mullivaikkal, the Tamil National Alliance (TNA) — representing Tamils in Sri Lanka’s north and east, termed the destruction of the memorial structure “the height of indecency.” “The act did not merely destroy a plaque made of stone, but has demolished the hearts of lakhs of Tamil people,” a statement issued by Alliance spokesman and Jaffna MP M.A. Sumanthiran said. The incident was reported after the army and police inspected the place, the statement said, adding that no one can prohibit the people remembering those who died in the war. “No orders can make those memories fade. We will observe the Mullivaikkal remembrance, in a way that no one can stop us,” the statement said.