Tamils, the North and the State – Vishwamithra 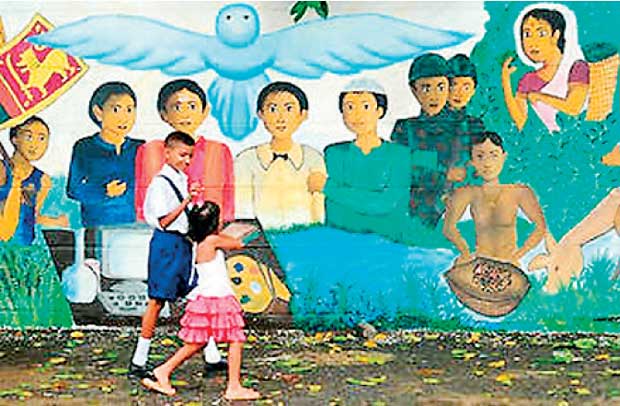 “Patriotism is when love of your own people comes first; nationalism, when hate for people other than your own comes first.”
-Charles de Gaulle

When we discuss in our high-sounding socio-political conversations of reconciliation or accommodation, we simply mean a genuine feeling of empathy, based fundamentally on compassion and kindness. Whether one is a Tamil, Sinhalese, Muslim or a Burgher, reconciling oneself to the feelings, ambitions and desires of the other is not an easy human endeavour. Centuries-long myths have taken their toll and prepped the hearts and minds of our people. And it is not specific to Sri Lanka alone. All humankind has proven to be most receptive and consequently susceptible to the moods of the contemporary world. From the dawn of time, man has ventured out to be part of a group, family or a sect. Instead of living alone, he had realised that numbers give not only strength, they give a sense of belonging.

That sense of belonging gave man his desire and ambition to endeavour out together and conquer what was to be conquered. That desire for conquest is still going on unrelentingly.

That unrelenting ambition of man has helped land a man on the Moon; it has propelled him to carve out lush green fields out of desert sands; it has given us the smartphone and the fax machine and it continues to drive him through the proverbial peaks and valleys of victory and defeat. Man’s mastery of the universe, though not complete by any standard, is breathtaking and mind-boggling. And when the spirit of man continues to conquer everything around him, as Jawaharlal Nehru uttered in his Independence address: “a moment comes, which comes but rarely in history, when we step out from the old to the new; when an age ends; and when the soul of a nation long suppressed finds utterance”.

Yet, when one comes back to the basics of human decency and human graciousness, time and time again he has failed to contain his mean anger and primeval fears; he has resorted to the most wicked endeavorus of violence and man’s inhumanity to man has been well chronicled for all to see. In the words of Herodotus the father of history, “It’s impossible for someone who is human to have all good things together, just as there is no single country able to provide all good things for itself”. Man’s unyielding march towards bettering himself has given the world all wars and conflicts; it has left the world with more questions than answers, it has redirected the journey towards self-centred parochial ends. And in this pursuit of parochial ends and selfish goals, he has invented cocoons that nourish him; he has produced bubbles that protect him and patriotism, nationalism are essential parts of those cocoons and bubbles. To quote French President Charles de Gaulle: “Patriotism is when love of your own people comes first; nationalism, when hate for people other than your own comes first”.

So the Tamil question that Sri Lanka is attempting to grapple with today, is just a microcosm of this vast fabric of human behaviour, a dynamic which has been associated with the development of man since his early beginnings, since the early Neanderthals walked out of their caves. Man’s natural propensity towards coalescing with like minded men and women has ultimately resulted in the formation of families, communities and nation-states. In order to protect and expand those protected habitats, Mauryan and Greek Emperors and the Caesars of the ancient world and since them, Napoleon, Hitler, Stalin, Mao, Nehru, Ayub Khan have all crossed their national boundaries. In doing so, the notion of preservation and protection gave way to fulfilling a primordial yet ravenous thirst for conquest. And their fellow countrymen chose to follow their leaders wherever they went.

Given this historical context and the peculiar manner in which the ‘South Indian’ psyche, the patriarchal ancestor of our Northern Tamil friends, is placed in the montage of international relationships, a gradual turn to extreme violence to attain their ‘legitimate’ national homeland claims seems to be a logical step in the chain of events. Time and again our local pundits, both Sinhalese as well as Tamils have sought refuge in worn out pages of the Great Chronicle (Mahawansa) and dust-laden Tamil scriptures. In order to satisfy that ancient need for cultural nourishment and inevitable sense of belonging and identity, both adversaries resorted to this sterile pastime of history-dwelling. Instead of learning from history, they chose to exploit their respective ends.

The dismal failure of peace talks between the two parties since violence broke out in 1983, especially in Timpu, displayed this belligerent stance adopted by them. Chauvinists of either party had a heyday while an attempt at genuine peace suffered an abortion. Prabhakaran was a direct product of that environment which created great animosity and mistrust between the two communities as much as Chelvanayagam was in the first half of the Twentieth Century. Chelvanayagam and the Ponnambalam brothers were, in terms of their own interpretation, let down by the prevailing Sinhalese leadership at the time. Evidence does exist that they were greatly disenchanted with the Colombo-and/or-foreign-educated Sinhalese political elites. Time after time the Sinhalese leadership made promises in order to secure the support of the Tamil leadership in the Legislature and each time, firstly by S W R D Bandaranaike and thereafter by Dudley Senanayake reneged on those promises.

But, by the time the Tamil Establishment led by the Tamil United Liberation Front (TULF) of which the Federal Party (FP) was a coalition partner was meandering in the wilderness of inclusive socio-political partnership with the majority Sinhalese Buddhists, the Tamil youth had lost their patience. Emergence of a terrorist wing among the Northern Tamil community became almost a natural progression of the in-equilibrium between the two major ethnic groups in Sri Lanka. Whichever manner one tries to interpret it, whether flowing from the ancient days of Dutu Gemunu or at the turn of the 20th Century, the mistrust continued to be aggravated with each legislation passed by the post-Independence leaders of Sri Lanka. A thirty-year war, although protracted beyond one’s wildest imagination, presented itself as a logical necessity prior to a commencement of meaningful dialogue among the parties, Sinhalese, Tamil and Muslims.

Nevertheless, Tamils in the North seemed to possess a unique trait in that, its unwillingness to be absorbed into the mainstream socio-economic polity of the country and hesitancy in identifying with the day-to-day issues of national significance has contributed greatly to the sense of suspicion the Sinhalese majority holds against them. The empathy that the Sinhalese leaders and elites showed towards the Tamil community was not reciprocated by the Tamil brethren. On the other hand, the Muslim community is seen to be on the other extreme of this spectrum. Both leaders as well as the ‘commoners’ of the Muslim community readily lent their mite whenever the occasion arose and history bears testimony to this fact.

This attitudinal problem which has infested the Tamil community as a whole cannot be grappled with unless and until some objective conditions are created and material changes effected by way of legislation, leadership changes and even coercion. Tamils standing apart from national problems, such as cost of living, unemployment, infrastructure development, freedom of expression and of the Press etc., and assuming a not-so-important attitude towards these day-to-day issues that matter to all ethnic groups has compounded the concern.

In other words, Tamil leadership and their major players in business, academia and opinion leaders must start to come out of their shells and be seen as average ‘Sri Lankans’, not necessarily just ‘Tamils’. Then and only then the majority of Sinhalese people would accept them as equal partners in a pluralistic society. They must understand that road to amity runs both ways, certainly not a one-way street. Then only would they understand the meaning of such a profound quote of Victor Hugo, the author of Les Misérables: “Be like the bird who, pausing in her flight awhile on boughs too slight, feels them give way beneath her, and yet sings, knowing she hath wings”.

Economic problems do not recognise colour, creed or religion. Economic problems do not wait to surface whether they were created by the UNP, SLFP or a combination of both. If the Tamil leadership is willing to display some semblance of political acumen- especially of J R Jayewardene type- then there might be a common path emerging for all parties to tread on. Don’t forget that, as much as the traditional left was rejected by the Wijeweera-led Janatha Vimukthi Peramuna (JVP), the traditional Tamil politics was also challenged and replaced at least for thirty long years- though based on socio-ethnic grounds as against class-based economic principles- by the Prabhakaran-led Liberation Tigers Tamil Elam (LTTE). Change as a constant thread that runs through the fabric of human history is very appealing when change appears as a necessary condition of hope. Or else, we might as well awake to the reality of truism penned by Joseph Conrad, in his celebrated masterpiece, Heart of Darkness “We live as we dream – alone. While the dream disappears, the life continues painfully.”