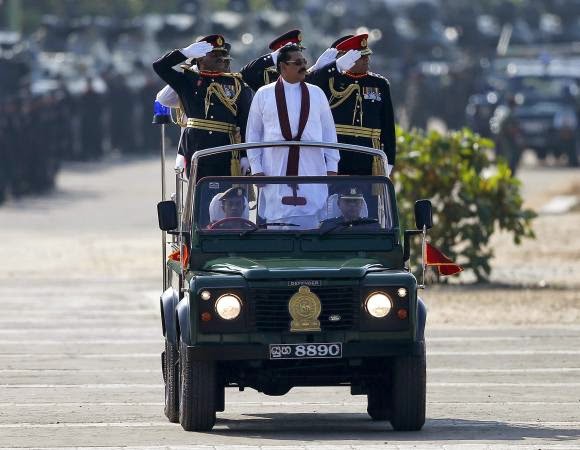 (Reuters) – Minority ethnic Tamils said on Sunday they had been banned from commemorating the deaths of their relatives five years ago in the final battle of a 26-year war with Sri Lanka’s military, a charge denied by the army.While President Mahinda Rajapaksa, who is under international pressure to investigate war crimes in the battle, watched a victory parade in the south of the island, Tamils said they had been barred from attending Hindu temples in the north.
Ananthi Sasitharan, wife of a rebel leader missing since his Tamil Tiger separatists surrendered to the army on May 18, 2009, said the military used “abusive language” when she tried to enter the temple in Keerimalai.
“They didn’t allow me to Keerimalai Hindu temple to conduct my usual rituals to remember my relatives killed in the war and my husband. This is a blatant human rights violation. It exposes the government’s heavy military control over Tamil civilians,” she said.
Five other residents also said they had been banned, but declined to be identified due to possible reprisals.
They said security was tightened across the northern Jaffna peninsula, with roads closed to prevent any commemorative events. They said the military had ordered Tamils not to hold any commemorations.
Military spokesman Ruwan Wanigasooriya said families had not been barred from their rites, but some additional security had been established to maintain stability as some parties were trying to create what he described as an “unwanted situation”.
“There was no prevention of individual families commemorating their dead. Our concern was mainly about any organized move to politically incite people and … commemorating terrorists would not be allowed,” he said.
Wanigasooriya said the military saw some Tamil families observing religious rituals in temples, including in Keerimalai.
ELECTION LANDSLIDE
While both sides mark the end of the war every year, this fifth anniversary comes after the main ethnic Tamil party secured a landslide in a provincial poll in September, rekindling the animosity between the sides.
The Tamil National Alliance, the former political proxy of the defeated Liberation Tigers of Tamil Eelam, won 30 seats in the 38-member council in the former northern war zone.
The TNA victory showed the defeat of the rebels in 2009 did nothing to subdue calls for autonomy among Tamils, who make up about 14 percent of Sri Lanka’s 20 million people.
“When we are suffering with the loss of lives and other properties, how can this government justify their victory?” Sasitharan, a TNA councilor, told Reuters.
More than 100,000 people were killed in the war and thousands, mainly from the minority Tamil community living mostly in the north, are still missing.
The United Nations in March approved an international probe into the war crimes allegedly committed by both Sri Lankan state forces and Tamil rebels during the conflict, saying the government had failed to investigate properly.
A U.N. panel has said around 40,000 mainly Tamil civilians died in the ferocious final months of the conflict, but Sri Lanka has disputed that figure. Both sides committed atrocities, but army shelling killed most victims, it concluded.
Despite concerns raised by international community about marking the victory, Rajapaksa went ahead with the celebrations in the town of Matara.
“We celebrate the victory of peace and not the victory of war. The best way of respecting the war heroes is maintaining the peace,” Rajapaksa told the victory day celebration.
Tight security has been in place in Jaffna since March. The military killed three Tamil militants in April in the first combat since 2009.
(Additional reporting by Dinuka Liyanawatta in MATARA; Writing by Shihar Aneez; Editing by Alison Williams)
By Shihar Aneez and Ranga Sirilal