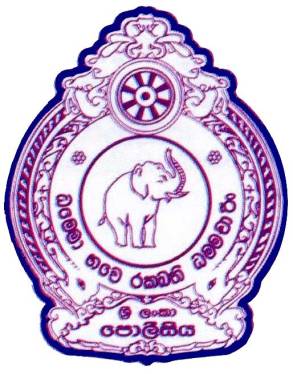 Responding to comments made by the Northern Chief Minister that Tamil-speaking policemen should be recruited to serve the people in the Tamil-dominated Northern Province, Sri Lanka’s Police Chief today stated that different police forces cannot be created to suite a certain race. The Sinhala speaking police officers are working in Jaffna and the Tamil community who cannot understand Sinhalese have to live with it as this is the law of the Sri Lanka.

Yesterday Defence secretary Gotha Rajapakshe said that the newly elected Chief Minister is NOT allowed to give orders to the Sinhala dominated police in the North but as per the constitution of the country he is in charge of keeping Law and Order in the North.

Inspector General of Police N.K. Illangakoon stated that different police forces cannot be created to suite different races and that all function representing all communities in the country have to be carried out by a single police force.
“Policemen serving in the north with no Tamil language skills and cultural understanding was an annoyance for a long time,” newly elected Chief Minister Wigneswaran had said while speaking at the historic first session of the northern provincial council in Jaffna yesterday (25). ¨As per the Inspector General of Police N.K. Illangakoon the Tamil civilians have no choice, they will have to live with the Sinhala speaking police and suffer. This seems to be the policy of the Racist Sinhala government in Colombo who talk of Reconciliation specialy when they talk to the Western leaders¨ said a Tamil journalist.
When the Jaffna Police Station first started operations few Tamil police officers were recruited and now every police station in Jaffna district has at least 3-4 Tamil policemen of the 30+ Sinhala police officers in these stations.
The police force started recruiting Tamil-speaking officers to resolve the language barrier after 60 years of independence but before the statement by the newly elected Chief Minister of the North, as the north is a Tamil dominated community. At the moment 1 Sinhala Sri Lankan force officer is in Jaffna district to every 5 Tamil civilian living in that district.
More than 60,000 Sinhala police officers are in Sri Lanka and only Around 2,000 Tamil-speaking officers were recruited to assist in the affairs of the Police Department who are currently serving Island wide, Inspector General of Police N.K. Illangakoon said.
ES
Share
Facebook
Twitter
WhatsApp
Pinterest
Email