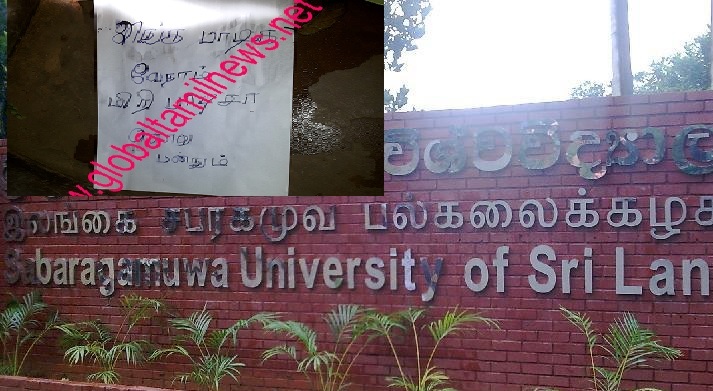 Following the intimidation given to Tamil speaking students by posters which mentioning the names of Tamil and Muslim first year students, calling for them to leave from Sabaragamuwa, one of the tamil students was attacked by persons wearing masks, on Sunday early morning.

Victim said that they had finished their studies at the midnight around 12-1 on Saturday and after that they had gone to bed. Then when he was going to washroom around 2 o’clock, one person wearing mask held of his mouth while another one had beaten him on head with wooden log and he had fainted following that.

He further said that when he became conscious, he could feel that he had been outside the student accommodation having tightened by rope on his neck. Then he had managed to reach up to the entrance of the hostel thus his friends had found him and had rushed to the hospital.

20th of last month hand written poster in broken tamil appeared at the toilets in Banda Students Hostel, warning all Tamil and Muslim students to leave From Sabaragamuwa immediately. The poster had further intimidated that if the tamil speaking students neglected this announcement and continued their studies, male students would be shot dead while female students would be raped, Students further stated.
– GTN