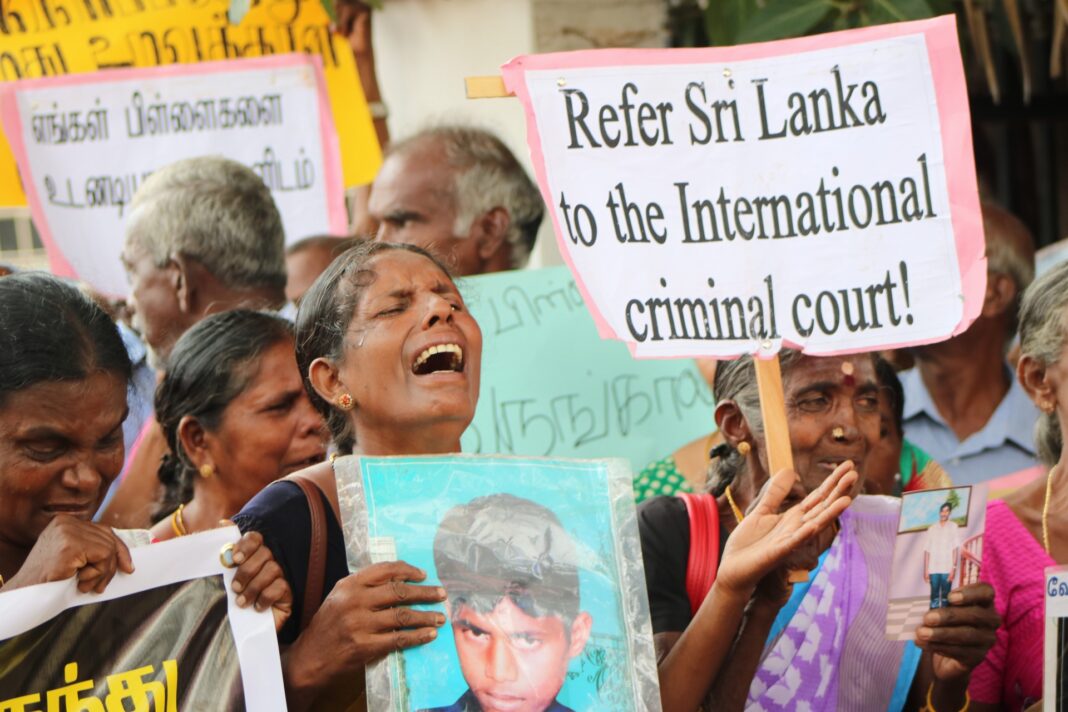 In a joint letter to  Core Group on Sri Lanka (UNHRC) Tamil civil society organisations, activists and politicians have called for Sri Lanka to be referred to the International Criminal Court (ICC).

Since you take the lead on Sri Lanka as members of the Sri Lanka Core-Group at the UN Human Rights Council (UNHRC), we from Tamil Victims, Tamil political parties and
Tamil civil society are jointly writing to you ahead of the upcoming September UNHRC 51st Session, about our concerns of continued failure for accountability for war crimes,
crimes against humanity and genocide committed against the Tamil people.

During this Session Sri Lanka will be evaluated about Sri Lanka’s compliance of UNHRC Resolutions. We urge you to present a strong Resolution for achieving accountability for atrocity crimes committed thirteen years ago, by calling Sri Lanka be referred to the International Criminal Court (ICC), as recommended by UN HighCommissioner for human rights in her March 2021 report to UNHRC and reinforced by all four former UN High Commissioners for Human Rights, nine former Special Rapporteurs who had visited and written reports on Sri Lanka, and all three members of the Secretary-General’s Panel of Experts on Sri Lanka.

We as representatives of Tamil people strongly believe that anything short of calling for the referral to ICC will permanently eliminate any chance of getting justice for the mass atrocities we faced. Additionally, this will encourage the security forces and government to commit mass atrocities against Tamil people without any hesitation.
We collectively urge you to ensure that in the Resolution by Core-Group on Sri Lanka to the UNHRC 51st Session clearly urge UN Security Council to refer Sri Lanka to the
International Criminal Court (ICC).

Within a week of the end of the armed ethnic conflict in Sri Lanka in May 2009, a joint communique was issued by the Government of Sri Lanka and the United Nations at the
conclusion of the UN Secretary General’s visit to Sri Lanka on 23rd of May 2009, which inter alia stated “Sri Lanka reiterated its strongest commitment to the promotion and protection of Human Rights, in keeping with international Human Rights standards and Sri Lanka’s international obligations. The Secretary General underlined the importance of an accountability process for addressing violations of International Humanitarian and Human Rights law. The Government will take measures to address those grievances”.
Sri Lanka has not taken any meaningful steps to address the above commitments in the last thirteen (13) years. During the intervening years the UNHRC has adopted seven (7)
resolutions ending with UNHRC 46/1 in March 2021. Sri Lanka even co-sponsored some unanimously passed Resolutions, including one about establishing Hybrid-Courts
with the participation of international judges, prosecutors, and defense lawyers. Several years have passed, but Sri Lanka did not take any initiative to set up a Hybrid-Court as promised by the Government to UNHRC.

In addition to not addressing the accountability issue, the government of Sri Lanka continues with a program of oppression of Tamils, including keeping extremely large
military in Tamil areas despite thirteen years have passed since the war ended and land grab to settle Sinhalese in traditionally Tamil areas with the aim to transform Tamil
areas into majority Sinhala Areas.

Recommendation by UN High-Commissioner for Human Rights and other senior UN officials:

Due to serious nature of the atrocity crimes committed and successive Sri Lankan Governments’ evasive tactics to address accountability, UN High-Commissioner for Human Rights in her report to UNHRC in January 12, 2021urged the Council to take steps to refer Sri Lanka to ICC. This call was reinforced by several senior UN officials’
suggesting the same.

High -Commissioner’s report on Sri Lanka on Jan 12, 2021 referring Sri Lanka to ICC states:
“Member states have a number of options to advance criminal accountability and provide measures of redress for victims. In addition to taking steps towards the referral
of the situation in Sri Lanka to the International Criminal Court, Member States can actively pursue investigation and prosecution of international crimes committed by all
parties in Sri Lanka before their own national courts, including under the principles of extraterritorial or universal jurisdiction.” https://undocs.org/A/HRC/46/20

An open letter from 20 former high-level UN officials on February 18, 2021. The signatories included all four former UN High Commissioners for Human Rights, nine former Special Rapporteurs who had visited and written reports on Sri Lanka, and all three members of the Secretary-General’s Panel of Experts on Sri Lanka.

“The recently released report on Sri Lanka by UN High Commissioner for Human Rights underlines, yet again, the country’s lack of progress on justice and accountability. Based largely on an analysis of emerging trends, it makes a compelling case for decisive international action to ensure justice and accountability for mass human rights violations and atrocities in Sri Lanka as a central element of the search for sustained reconciliation and the prevention of the recurrence of rights abuses and conflict. Given the continued reluctance of the Sri Lankan Government to meaningfully uphold the human rights of all, only decisive, international action to ensure justice and accountability can interrupt Sri Lankas periodic cycles of violence.”
https://chrgi.org/wpcontent/uploads/2021/02/Sowing-the-Seeds-of-Conflict.pdf

Is it a valid argument that UN Security Council will block a Referral of Sri Lanka to ICC?

Some people argue that referring Sri Lanka will be blocked at UN Security Council
(UNSC). This argument is misleading since none of the UNSC Permanent members have indicated that they will veto any referral of Sri Lanka to ICC.

In addition, it should be noted that the same concern was raised previously in other situations, but UNHRC went ahead and urged UNSC to refer those countries to ICC.
For example:

a) Sudan was referred to UNSC with recommendation to refer it to ICC. Even though Sudan is very much close to China compared to Sri Lanka, China did not exercise its veto, resulting in Sudan being referred to ICC and then Sudanese President Omar al-Bashir was served with ICC summons.

b) Similarly, North Korea was referred by UNHRC to ICC, despite very serious concern of China using its veto.

Then the question arises why this excuse is being advanced against Sri Lanka being referred to ICC by UNHRC. Only logical conclusion for this argument is that is to protect
Sri Lankan political leaders and military officers from facing justice for the mass atrocities committed against Tamil people.

Request:
For the above reasons we, as representatives of the Tamil people jointly urge you, as requested by UN High Commissioner for Human Rights and other UN officials, to call in
your Resolution to urge UN Security Council to refer Sri Lanka to the ICC, as was in the cases of North Korea and Sudan.

Thank you for your consideration.
Sincerely

For signatories read the letter as a PDF :  Letter Core-Group at the UN Human Rights Council signed