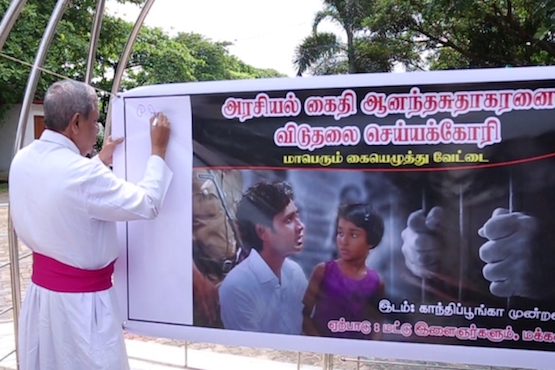 Image: Bishop Joseph Ponniah signs a poster calling for the release of Satchithanantham Ananthasuthakaran at Gandhi Park in Batticaloa last month. (Photo by L. Athiran)
ACPR has released the next in our issue brief series, Issue Brief No. 3 – Tamil Political Prisoners: Suggestions for a Comprehensive Legal Policy Approach.
Press release announcing the policy brief fellows:
Mr. Satchithanantham Ananthasuthakaran, sentenced to life under the Prevention of Terrorism Act (PTA) in 2008, was given three hours on the 18th of March 2018 to take part in his wife’s funeral at their residence in Maruthanagar, Kilinochchi. After the funeral when Ananthasuthakaran was being led back to the prison vehicle, his young daughter also attempted to alight the vehicle, unaware that he was being taken back to the prison. The photos of the child attempting to alight the prison vehicle holding tight to her father’s hand engulfed vast sections of the Tamil community in emotional distress and anger. This has snow balled into a signature movement calling on President Sirisena to pardon Ananthasuthakaran. The two young children also met President Sirisena who reportedly promised to act on their request for release before the April New Year celebrations.

However, to date, the President seems not to have taken any follow up action to pardon Ananthasuthakaran and recent news reports suggest that he does not plan to.

This brief seeks to provide a policy prescription on dealing with the issue of Tamil political prisoners. Too many like Ananthasuthakaran have suffered for too long under the draconian framework of the PTA which both perpetuates human rights and due process abuses systemically against political prisoners, and also does not provide a suitable framework for prosecuting international crimes.This policy brief details an alternative legal policy approach using the international humanitarian law concept of ‘combatant immunity’, that the Sri Lankan Government can take to comprehensively and justly resolve the political prisoner issue without affecting the search for accountability and justice for serious violations of international humanitarian law and other international crimes committed during the war.

This brief does not deal with the issue of Presidential pardons which are a separate legal issue subject to political will, but rather tries to consider a holistic and sustainable strategy for handling Tamil political prisoners that would promote lasting peace, meaningful reconciliation, and accountability and justice. ACPR however fully supports the call for a Presidential pardon for Ananthasuthakaran in the interim.