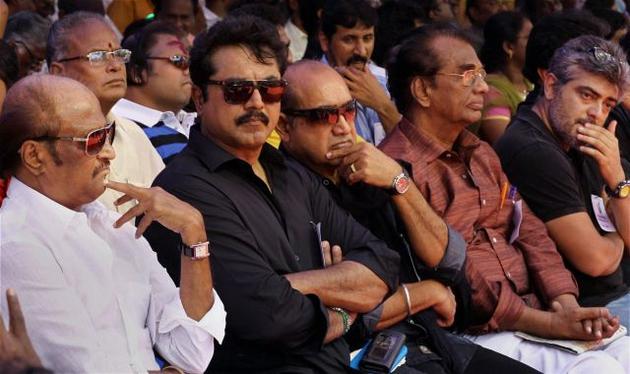 Actors and other representatives of the Tamil film industry on Tuesday began a day-long fast demanding the rehabilitation of Sri Lankan Tamils and an international probe into the alleged war crimes.
Film activity in Tamil Nadu came to a standstill as artistes, directors, producers, distributors and exhibitors are participating in the hunger-strike being held at the premises of South Indian Film Artists’ Association in Chennai.
Noted film personalities of Kollywood, including South Indian Film Artistes’ Association president R. Sarath Kumar, Rajnikanth, Ajith Kumar and Surya, are part of the agitation.
These personalities of the Tamil celluloid world are the latest to stage a protest over the issue, which has generated heat in the State in recent weeks with various sections of people, including students, taking to the streets.
Sarath Kumar, who is leading the protest, demanded that the Centre implement the resolution adopted by the Tamil Nadu Assembly recently demanding a referendum on separate Tamil Eelam and action against those who committed war crimes.
– The Hindu
Share
Facebook
Twitter
Pinterest
WhatsApp