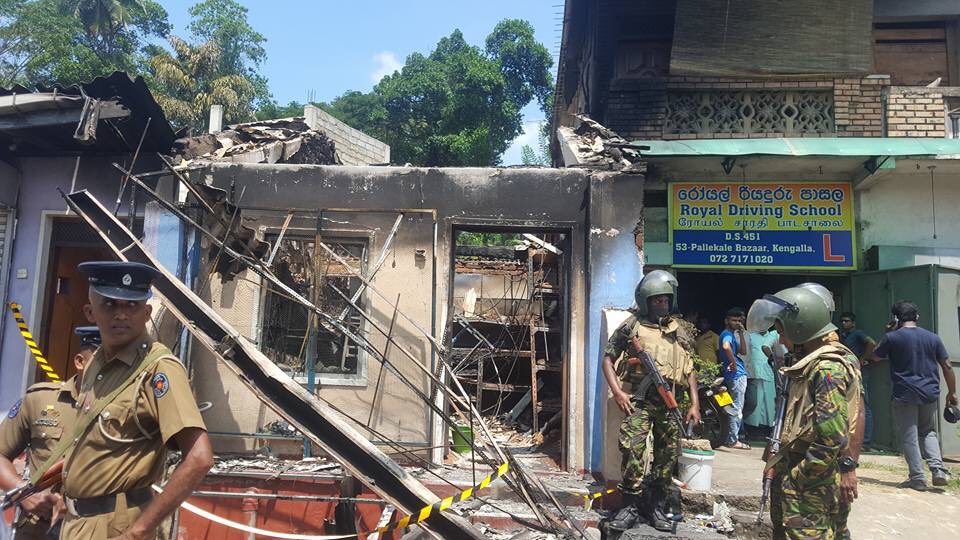 Image: Military in Digana after 27 Muslim owned shops were set on fire by Sinhalese mobs.

March 06th 2018, Colombo, Sri Lanka: The Centre for Policy Alternatives (CPA) condemns the recent violence unleashed against the Muslim community, which has now claimed the life of Abdul Basith, a youth from Teldeniya and destroyed several Muslim homes and businesses as well as several mosques in the Kandy area. This recent spate of violence accompanied by the incitement of racial and religious hatred is orchestrated as attested to by video footage on social media and statements made by government ministers. According to media reports, the current violence commenced as a consequence of a personal dispute between M.G. Kumarasinghe and a group of Muslim men on 22nd February, which on 3rd March cost Mr. Kumarasinghe his life. The present violence ensued soon thereafter.Media also reported that those accused of attacking Mr. Kumarasinghe were immediately arrested and placed in remand custody.This must be followed by prosecutions in adherence to the law.

CPA is also deeply concerned by the viral circulation of video clips inciting violence against the Muslim community. CPA is in possession of several such clips including one by a person claiming to be a Buddhist monk.The individual in the video uses demonstrably false information as fact to incite violence against the Muslim community and accuses the Chief Prelates of favouring Muslims over Buddhists.

CPA calls on citizens from all communities to refrain from inciting further violence and on the authorities to take swift action to both arrest and prosecute perpetrators within the existing legal framework. Inaction or half-hearted action at this critical junction will deepen mistrust, fear and tension within and among communities, fuel hate and violence and cement a culture of impunity.

The recent incidents in the Kandy area and Ampara are not isolated incidents but highlight the persistence and increase of communal tensions in post-war Sri Lanka. Despite CPA citing the relevant legal provisions when calling upon the law and order authorities to arrest and prosecute perpetrators, including those responsible for the production and circulation of inflammatory videos and hate speech, no prosecutions have to date resulted in any convictions.Yet again, in the spirit of constructive engagement, CPA has today dispatched another letter to the relevant authorities calling for swift and decisive action. If the relevant law enforcement authorities cannot or will not take necessary action, CPA is of the firm belief that they should resign their office or be removed in accordance with the law. The gravity of the situation, the growing perception of government inability to fulfill it responsibilities in respect of reconciliation, the prevention of religious and ethnic violence and intolerance and the maintenance of law and order, demands no less.

Considering Sri Lanka’s history of violence, these recent events and statements made by individuals inciting racial and religious hatred should not be taken lightly. Immediate action must be taken to arrest this behaviour, which actively plays on the fears of people and seeks to channel that fear to harm persons of other ethnic and religious communities. Sri Lanka is a multi-ethnic and multi –religious country and should be strongly defended as such without fear or favour. In all of this, the President and Prime Minister must give decisive and unequivocal leadership to prevent any future violence, uphold the rule of law and halt the fast erosion of an increasingly fragile peace in post-war Sri Lanka.