Switzerland: Speedier Asylum Process From 400 Days to 140 Voted In 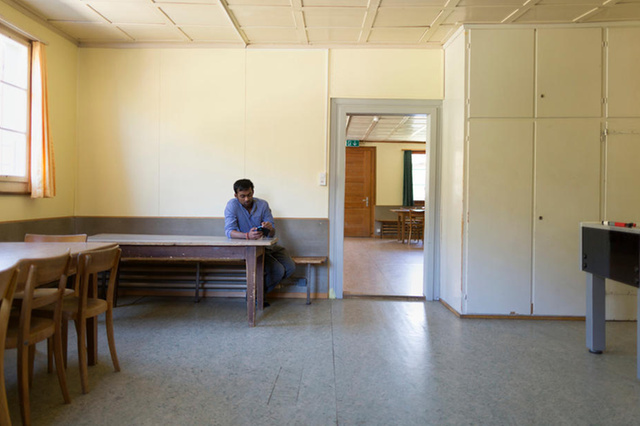 Voters have backed government plans to speed up asylum procedures in Switzerland. Proponents say the reforms will make the system fairer for all.

On Sunday, 66.8% of voters backed a legal amendment to reform asylum procedures, which was passed by parliament last year but challenged by the conservative right Swiss People’s Party. Nationwide turnout was 46%.

Asylum reform
Under the proposal, most asylum requests should be decided within 140 days of being submitted, including time for appeals – compared with the 400 days at present. Most of the simpler asylum cases will be dealt with in new bigger federal reception centres that can take up to 5,000 people. Asylum seekers will be also be granted free legal aid.

“I think it’s hard to talk about a toughening of the law. With faster and fairer procedures we have a solid asylum policy that has the support of the population,” Justice Minister Simonetta Sommaruga told Swiss public radio, RTS, following the result.

The minister said Switzerland would remain engaged on asylum issues in Europe and continue its humanitarian aid programmes in the regions in crisis, as well as seek to conclude readmission agreements with relevant states.

The government, which has been inspired by similar reforms in the Netherlands, says applications will be accelerated considerably. In a trial run of the new system, held in 2014 in a centre in Zurich, it was found that the process was 39% shorter and the number of appeals was reduced by 33%. The number of voluntary repatriations tripled.

The government says these changes will cost CHF500 million ($506 million) but in the medium-term should actually save over CHF200 million a year.
‘Tricked’

Sunday’s asylum referendum was unusual, as it was the first time an amendment to Swiss asylum legislation had been supported by the left and opposed by the right.

The People’s Party described the proposed reforms as unhelpful and counterproductive. But it pursued a low-key campaign, especially as its initial arguments against free legal aid and possible expropriations of land to build federal centres had received little traction.

After Sunday’s result, People’s Party parliamentarian Andreas Glarner was critical, saying the cabinet had created a “propaganda machine and tricked the Swiss people”.

He said his party would soon prove that the new procedures were not going faster, and were creating problems at communal level and costing Switzerland a fortune.

In a statement the party said the cabinet and parliament now had to keep its promises.

“The plans now have to lead to a clear acceleration in asylum procedures,” it declared. “But speeding up is not just about reducing the time spent making asylum decisions but also dealing with negative decisions to ensure an effective speedy return of people to their homeland or transferring them to their first [European] country of arrival under the Dublin Accord.”
‘Advantages’

“The country will not only benefit from shorter procedures for asylum-seekers and cost-savings, but also faster integration of refugees in the employment sector,” he declared.

Hans-Jürg Käser, president of the Conference of Cantonal Justice and Police Directors, said accelerated procedures in federal centres should ease the cantons’ workload.

“The fact that procedures will take on average half the time than at present and that a framework will be in place to set up federal centres is a big step forward,” he noted, adding that Swiss voters had fully understood that the reforms had been prepared seriously and enjoyed wide support, especially in parliament.

All cantons supported the reform, as well as the communes welcoming new reception centres, such as Vallorbe in canton Vaud (67.6% support), Chevrilles in canton Fribourg (53.5%) and Boudry in canton Neuchâtel (75.8%).

Requests in Switzerland drastically declined in the first quarter of 2016, with 45% fewer registered than at the end of 2015. Migration authorities attribute the slide to fewer people attempting to reach Europe over the so-called Balkan route.

However, longer-term figures tell a different story – overall asylum requests have increased by 85% compared with one year ago. The situation remains difficult to predict and federal and cantonal governments are preparing for a renewed increase in asylum seekers in the coming months.