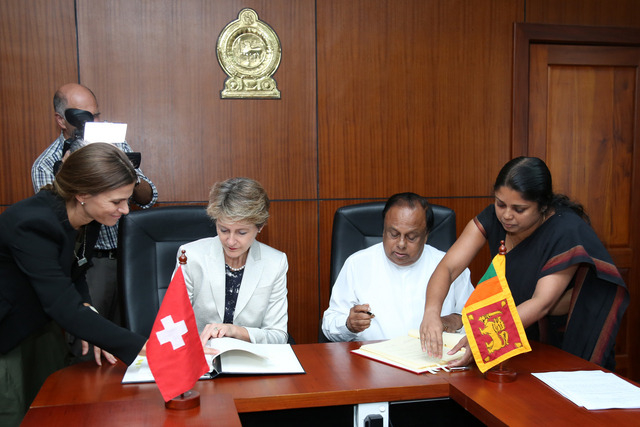 (The agreement being signed between the Federal Councillor Simonetta Sommaruga, and the interior minister of the Asian country Seneviratne Bandara Nawinne, Photo:lematin.ch)

BERNE / COLOMBO – Ensuring the repatriation of people who can no longer stay in Switzerland in respect of human rights. This is what provides the immigration agreement signed today between the Federal Councillor Simonetta Sommaruga, visiting Sri Lanka, and the interior minister of the Asian country Seneviratne Bandara Nawinne.

During the meeting, Sommaruga reiterated the support of Switzerland in the reconciliation process underway in the country, torn apart by decades of civil war with the Tamil separatist movement.

The agreement with Sri Lanka, indicates a note of today’s Federal Department of Justice and Police (DJP), forms the basis for intensifying cooperation with the Sri Lankan authorities, for example under the voluntary return and reintegration, in the fight against smuggling of migrants and trafficking in human beings, as well as in the field of migration management.

Periodic meetings are planned to ensure the proper implementation and application of the Agreement, in particular with regard to the safe return of the persons returned and their treatment consistent with respect for human rights.

Seekers, practice is not changed – however, emphasizes the press, this agreement does not imply any change in the practice of the State Secretariat for Migration, which will continue to examine every single application for asylum to determine whether the conditions are fulfilled to grant the applicant the quality refugee, and later, if a removal to Sri Lanka is permissible.

Before the signing, Federal Councillor visited the former theater of conflict in northern Sri Lanka, where since 2003, Switzerland has rebuilt about 5100 homes destroyed and carries a migrant worker protection program. The federal government supports the local efforts in favor of human rights and peace; for this purpose seconded a consultant to Human Security in Colombo and a collaborator in Jaffna.

Return assistance – Among other things, Sommaruga visited a vocational training project co-financed by Switzerland in Kilinochchi. The project enables young people to obtain training and further training in order to have better prospects in the labor market, by offering them an alternative to emigration. The program is also open to those who return from Switzerland.

In Jaffna, the minister of justice and police then met people repatriated from Switzerland who have benefited from the return for help – about 3,500 francs – and have succeeded in rebuilding their lives.

Reaffirming the importance of continuing this process, as well as democratic reforms and improvements in human rights, Sommaruga reiterated Switzerland’s willingness to maintain its support to Sri Lanka at this location.

Tomorrow, during a courtesy call with President Maithripala Sirisena, Sommaruga will ask the implementation of any measures accepted by Sri Lanka last year in the Council Resolution of Human Rights of the United Nations including, in particular, the abolition of some aspects of anti-terrorism law that violate international law.

After the interview, the Federal Councillor will continue its journey to the Indian capital New Delhi, where for Thursday is expected among other things the signing of two agreements on migration.