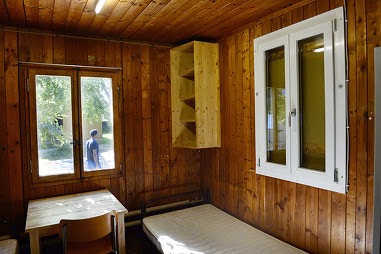 Jo Fahy, swissinfo.ch and agencies
A pilot project to slash the length of time taken to process asylum applications has received a positive report. Five months in, more cases have been handled than expected at the fast-track asylum centre in Zurich. The Juch asylum centre opened in January with the aim of taking decisions on applications for asylum within 140 days, or nearly five months, in each case. Nearly 670 cases began the faster procedure and decisions were taken in 319 of them. Forty-four of them were positive, meaning the applicant was granted asylum.

Sixty-three were turned down and ordered to leave the country. In 158 cases decisions were not taken under rules known as the Dublin procedure, where applicants who have already applied for asylum in another country are returned to continue the procedure there.

A further 54 cases received a negative decision, but the applicant was granted temporary admission.

Around 10% of applicants who had their case rejected lodged an appeal. One of the key parts of the test project is free legal advice to help the applicants compile an organised case with supporting evidence and to advise them on the likelihood of an appeal being successful.

In some cases where an applicant has a very slim chance of success with an appeal, free legal advice is not offered, although the person is able to seek legal assistance at their own expense.
Early days

Speaking at a news conference in Zurich on Wednesday, Barbara Büschi from the Federal Office for Migration stressed that it was too early to draw concrete conclusions from the numbers, and that the figures were a “first, tentative balance from the first five months”.

She added, “not everything went perfectly at first, but that is the reason why we have a test project. There were certain weak points in the process”.

One of the points Büschi referred to was the need for more interpreters to deal with the wide range of language spoken by those applying for asylum.

The test project will run until September 2015, after which it will be assessed and a decision taken on how the results will impact the asylum application process across Switzerland as a whole.

Photo: Accomodation for the asylum seekers is split into areas for women, men and families (Keystone)
Swiss Info