Swiss to get tough on Sri Lankan refugee status 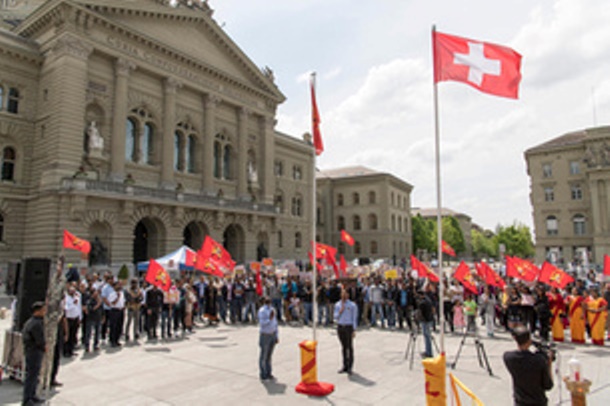 Tamils hold a ceremony outside the Federal Parliament building in Bern on May 18, 2016 in memory of victims of the Sri Lanka conflict(Keystone)
By Anand Chandrasekhar.
Swiss authorities have announced that they will apply more stringent criteria for granting Sri Lankan nationals – mostly ethnic Tamils – refugee status. They believe that the situation on the ground has improved since the 2009 civil war.

“Today we acknowledge that considerable progress has been made in the area of human rights, for example in the freedom of expression and assembly,” the State Secretariat for Migration (SEM) said in a statement on Thursday.

The SEM also added that the need to protect those with a link to the vanquished Liberation Tigers of Tamil Eelam (LTTE), a separatist rebel group of ethnic Tamils, was decreasing since the end of the bitter war in 2009 between the Sri Lankan army and LTTE for control of northern, Tamil-dominated part of the country, in which the latter were defeated.

However, the authorities acknowledged that “some gaps remain, especially in the area of human rights” and as a result individual circumstances will be taken into consideration while examining asylum requests.

At the end of May 2016, 1,316 asylum applications from Sri Lankan nationals were pending at the SEM. In total, over 5,000 Sri Lankans have been taken in by Switzerland, of which 3,674 have been given refugee status. A total of 1,613 have been admitted provisionally and potentially face the threat of expulsion.

“Anybody who returns risks being treated like an LTTE sympathiser. They will be taken in for questioning at the airport and most likely tortured and imprisoned,” Anna Annor, vice-president of Swiss Council of Eelam Tamils, told swissinfo.ch.

She claims that many prisoners of war from the 2009 war have still not been released.

A 47-page report released by the SEM on Tuesday – based on visits to Sri Lanka in January and February – testifies that conditions have improved since its last analysis in 2014.

Poverty and lack of economic and career prospects were cited as the biggest problem in conflict-affected north of the country. The report acknowledged that individuals entering the country from abroad are investigated and those who left the country illegally (by sea using the services of human traffickers) can be denounced and fined for violating immigration laws.

“Although police violence is known to be a general problem, no more recent information is available on ill treatment upon entry at the airport in Colombo,” the report states.

During the visit of Sri Lankan Foreign Minister Mangala Samaraweera to Switzerland in March, there was talk of strengthening bilateral relations between the two countries, especially in the area of economic cooperation. The trade between Sri Lanka and Switzerland is worth around CHF300 million. A “migration partnership” was also agreed during the visit whose technical details ought to be finalised soon.

Annor claims that Switzerland’s keenness to trade with Sri Lanka is affecting its stance on the human rights situation in the country.

“The Swiss government needs to be neutral on the issue instead of supporting Colombo. It is all about business,” she said.

When contacted for a response, the authorities denied being influenced by external factors.

“It is a continuous task of the SEM to be informed and to analyse the situation and the developments in the states of origin of asylum seekers. The SEM therefore also observes the situation in Sri Lanka continuously and thoroughly. If situations change in the states of origin in respect to human rights or security issues, it can lead to changes of the asylum policy in Switzerland,” said an SEM spokesperson.