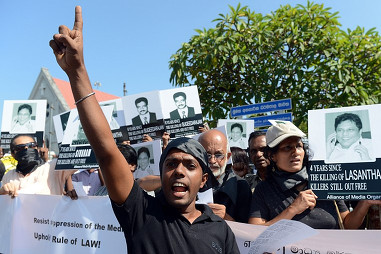 Sri Lankan and South African officials visited each other on several occasions last year and a TNA delegation flew to Africa for further contacts earlier this month.

Eager to help find a durable peace solution for the southeast Asian state, Switzerland is lending financial and political support to the South African initiative.

“Switzerland is convinced that only an inclusive dialogue can bring about a lasting solution to the political conflict in which all parties, including the minorities, co-decide on an equal footing,” said Swiss foreign ministry spokeswoman Carole Wälti.

Observers say potentially the South African experience has much to teach post-war Sri Lanka, but the initiative comes with risks attached.

“Governments concerned with sustainable peace in Sri Lanka also need to be careful that their desire for constructive engagement does not end up facilitating Colombo’s intransigence and delaying tactics,” declared an International Crisis Group (ICG) report last November.

“Hard to be optimistic”

Alan Keenan, an ICG Sri Lanka expert, went further, stating that it was “hard to be optimistic” about the South African initiative: “If it has any value, it is only as a long-term channel for eventual trust-building between the parties. But the onus is on the Sri Lankan government to show a willingness to match the many compromises that the main Tamil party has made recently … I don’t see this happening any time soon.”

He accused the Sri Lankan government of having no interest in fair negotiations with Tamil political parties, no intention to devolve meaningful power to the Tamil-majority northern province or the Tamil-speaking majority eastern province, and of going back on its many promises.

Current policies towards Tamils, especially in the northern province, were undermining their rights and damaging the prospects of a lasting political settlement, he added.

More than three years after the end of the 26-year armed conflict between the Sri Lankan armed forces and the Liberation Tigers of Tamil Eelam (LTTE), nearly 470,000 people displaced during its various stages have returned to their homes areas.

More than 93,000 people are estimated to still be displaced as of late December 2012, living in camps in Vavuniya, Jaffna and Trincomalee districts, in transit sites or with host communities.

Many of those who returned have not been able to achieve a durable solution but continue to face difficulties in accessing basic necessities such as shelter, food, water and sanitation, in rebuilding their livelihoods and in exercising their civil rights.

The US is set to sponsor a resolution against Sri Lanka, for a second year, at the rights council in March for failing to pursue those responsible for abuses as government forces were crushing Tamil rebels in the final phase of the three-decade war that ended in May 2009.

Sri Lanka rejects charges of human rights violations, including the alleged killing of thousands of innocent ethnic minority Tamil civilians in the rebel area, and has dismissed calls for an independent international inquiry.

In reply President Mahinda Rajapaksa appointed a domestic Lessons Learnt and Reconciliation Commission (LLRC) in 2010, which was heavily criticised by international human rights groups, to investigate events between February 2002 and May 2009.

Last March the UN rights council adopted a resolution urging Sri Lanka to implement recommendations made in the LLRC final report published in December 2011, including investigations into individual violations of human rights or humanitarian law.

A new report by the UN High Commissioner for Human Rights released on February 13 said steps taken by the government to investigate allegations of serious violations of human rights further had been “inconclusive and lack the independence and impartiality required to inspire confidence”. It added that Sri Lanka had only committed to implement some of the LLRC recommendations.

But Sri Lanka’s government disputes many of the UN report’s findings. Officials defend their record saying much has been done to address post-war issues and seek progress on the LLRC recommendations.

During a visit to Sri Lanka last month by a US delegation, Gamini Lakshman Peiris, Sri Lanka’s minister of external affairs, told reporters the success of the healing process would depend on the country being given time and space to continue the on-going domestic process.

He added that the country was making rapid progress in the resettlement of internally displaced persons, reintegration of the ex-combatants, de-mining and reviving the northern economy.

But the Swiss do not view developments in the north and east in such a positive light.

“The situation in the north, and to a lesser extent in the east of the country, remains precarious despite obvious infrastructure progress,” said Wälti. “The northern province is the only one which didn’t hold elections to its parliament and the military still plays an important role in civil and economic affairs. Civil society in general and human rights activists are under great pressure.”

International rights groups and western countries have raised concerns about the recent removal of Sri Lanka’s chief justice and restrictions on freedom of expression.

The Economist magazine ran an article in January describing Sri Lanka as “shuffling further down the path to dictatorship”.

And an Amnesty International report at the end of last year described a “climate of fear”, crackdowns on dissent and continued reports of torture, resultant deaths in custody, enforced disappearances and extrajudicial executions.

“The real issue is a continued culture of impunity and on-going violations. This is not just about the past,” Yolanda Foster, Amnesty International’s expert on Sri Lanka, told swissinfo.ch.

In a written answer to this week’s UN report the Sri Lankan government denied claims there had been a recent spike in disappearances and said it had taken measures to investigate all cases of missing people.

It also said there was “no institutionalisation of military authority over civilian matters” in the north and east, and rejected criticisms of army involvement in rebuilding efforts in the north, saying its assistance was “welcomed by the people in the area”.